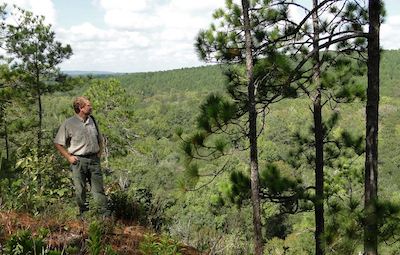 Just east of Manchester, a bumpy woods road of clay, sand and quartzite climbs to where the Pine Mountain ridgeline reaches for the sky before nose-diving into the Flint River.

Here, hills roll to the horizon, the dark shadows of clouds drifting across them.

Nathan Klaus takes it all in as he maneuvers his truck past deep ruts while peering out the window and talking between clunks that wrench at the steering wheel. The senior Georgia Department of Natural Resources biologist points out stands of longleaf pines that wash dark green down slopes colored tan and sage with little bluestem and other grasses.

“Every longleaf you’re looking at in this area was saved,” he says.

Saved because when Klaus learned that nearly 600 acres would be clearcut, he called the landowner to ask about sparing the longleaf. The answer: Put paint on whatever you want to keep. Klaus and staff scurried to gather cans of spray paint. As they marked trees, logging equipment rumbled nearby.

The rescue would soon turn even sweeter. The owner followed Klaus’ advice for site preparations to help save the groundcover, replanted the tract in longleaf and allowed DNR to conduct controlled burns.

Now part of DNR’s 6,500-acre Sprewell Bluff Wildlife Management Area, the area is testament to Klaus’ work with longleaf pine. It is also part of the reason he was named The Longleaf Alliance’s Bill Boyer Natural Resource Professional of the Year this fall. The award honors efforts to conserve longleaf ecosystems. Klaus was recognized for helping restore 12,000 acres in and around Sprewell Bluff, promoting prescribed fire—he supervises about 15,000 acres of burns a year—and studying topics such as the mixes of site-prep herbicides that best preserve forest-floor vegetation vital to longleaf habitats.

Klaus, who has spent most of his 19 years with DNR in the field, might call it seeing the big picture.

He hasn’t always. His first project, coordinating land management around Piedmont National Wildlife Refuge and Oconee National Forest for wildlife, didn’t go so well. “I was new and naïve,” he says.

He soon learned that timber companies and government agencies have detailed and sometimes different objectives that drive their plans. “You have to find a way to work around and with that.”

Klaus did, developing relationships and an understanding of common ground with partners varying from nonprofits to private landowners. He doggedly pursued goals, whether it meant training crews to boost prescribed fire acreages or landing an Arbor Day Foundation grant to plant 250,000 longleaf seedlings.

His initial work with DNR as an ornithologist also pointed him toward another lesson: Many animals and plants associated with longleaf forests were declining. Something needed to be done.

All came to a head in the Pine Mountain area. This part of the Piedmont in west Georgia is probably best known as the presidential retreat of Franklin D. Roosevelt. Yet for eons before, the hard Hollis quartzite underlying the region had stubbornly resisted erosion. The results include steep ridges and dry, sandy soils that feature a unique mix of montane, or mountain, and more southern ecosystems and wildlife.

Examples at Sprewell Bluff range from old-growth montane longleaf habitat, a conservation priority in Georgia’s State Wildlife Action Plan, to eastern coral snakes, a Coastal Plain species. Klaus tells of noticing an unusual-looking plant while eating lunch on a longleaf heath bluff at the WMA. The plant was confirmed as turkeybeard, a rare species of lily growing 150 miles farther south than expected.

These rugged wildlands first enchanted him years ago when he happened onto one of the longleaf stands while canoeing the Flint. Now he is being credited with helping save and restore them.

Klaus says the credit is shared with other DNR Wildlife Resources Division sections, adjacent landowners who helped with management and key grants from sources such as the Georgia Ornithological Society.

“The foundation of what we’re doing is that if you can jumpstart the ecosystem and get it going again, nature will take over,” with prescribed burns replacing the wildfires that once shaped these habitats.

He believes Pine Mountain’s longleaf woodlands hold more surprises, and promise. One of his goals is to see the return of red-cockaded woodpeckers, endangered birds last documented here 30 years ago.

“It’s a tight window to achieve this in my time left,” Klaus admits. But he’s hopeful and he’s still at work.