ATTENTION HUNTERS: Effective beginning with the fall 2022 hunting season – hunters may not bring whole or gutted carcasses or whole heads of any species of deer including elk, moose, and caribou into Georgia from any other state. Only boned out meat, hides, skulls or skull caps with antlers and all soft tissue removed (velvet antlers are okay), jawbones with no soft tissue, elk ivories, and finished taxidermy products may be imported from outside the state. This is regardless of whether or not the state where the animal was harvested has found CWD yet or not.

On January 12, 1967, Chronic Wasting Disease was first identified in Colorado in a captive deer herd. It was later detected in free-ranging deer in 1981. The disease subsequently spread to surrounding areas of northern Colorado and southern Wyoming by the 1990s. Since 2000, CWD has spread across most of the interior states and provinces of North America.

What is Chronic Wasting Disease?

Chronic Wasting Disease (CWD) is a neurological disease of deer, elk, and moose caused by infectious, misfolded proteins called prions. Because of the abnormal shape, they aren’t recognized and destroyed by the body, so they stack up in clumps in brain and nervous system tissue and kill the surrounding cells. Microscopically, this gives the brain a spongy appearance which is why it’s categorized as a transmissible spongiform encephalopathy (TSE). Other more familiar diseases such as bovine spongiform encephalopathy (or “mad cow disease”) and scrapie, which is found in domestic sheep and goats, are also TSEs. TSEs are always fatal to infected animals because there are no TSE cures or vaccines.

What are the symptoms?

Once a deer is infected with CWD, it can take over a year before symptoms begin to develop. Symptoms will include dramatic weight loss (wasting), poor body condition, subtle head tremors may occur, head and ears may be droopy, and, in the last stages, it is not uncommon for the animal to have excessive drooling. However, other diseases or injuries can cause these symptoms. In order to confirm a deer has CWD, the brain or lymph nodes must be examined microscopically for spongiform lesions.

How does it spread?

The disease is transmitted through direct contact with body fluids (blood, saliva, feces, urine) infected with prions. It can also be passed indirectly in the environment through contaminated soil, food, or water. CWD prions are contagious and once established, the disease is nearly impossible to get rid of. The prions that cause CWD can stay in the environment for long periods of time, so even after an infected animal has died, other animals can still get infected from the contaminated area for years.

Is there a cure?

There are no treatments at this time and the disease will always result in the death of the infected animal. There are also no preventative vaccines to protect healthy animals.

Is it transmissible to humans?

Currently, researchers have found no evidence CWD can infect people. However, as the potential health risk is continuing to be evaluated by public health officials, exposure to infectious materials should be avoided. The Centers for Disease Control (CDC) advises people to not eat the meat of any animal that tests positive for CWD. Also, when field dressing or processing deer, elk, or moose in areas where CWD is known to exist, precautions should be taken. Hunters should wear latex gloves when field dressing, bone out the meat, and not to saw through bones. Also, avoid cutting through the brain or spinal cord and handling of these tissues. People should not eat the brain, spinal cord, eyes, spleen, tonsils, and lymph nodes of any deer, elk, or moose. Hunters should thoroughly wash their hands and instruments after cleaning their harvest. You should consider having your animal tested if it was harvested in an area where CWD is known to exist. If you have the meat processed professionally, the meat should be processed separately without the addition of meat from other individual animals to yours. 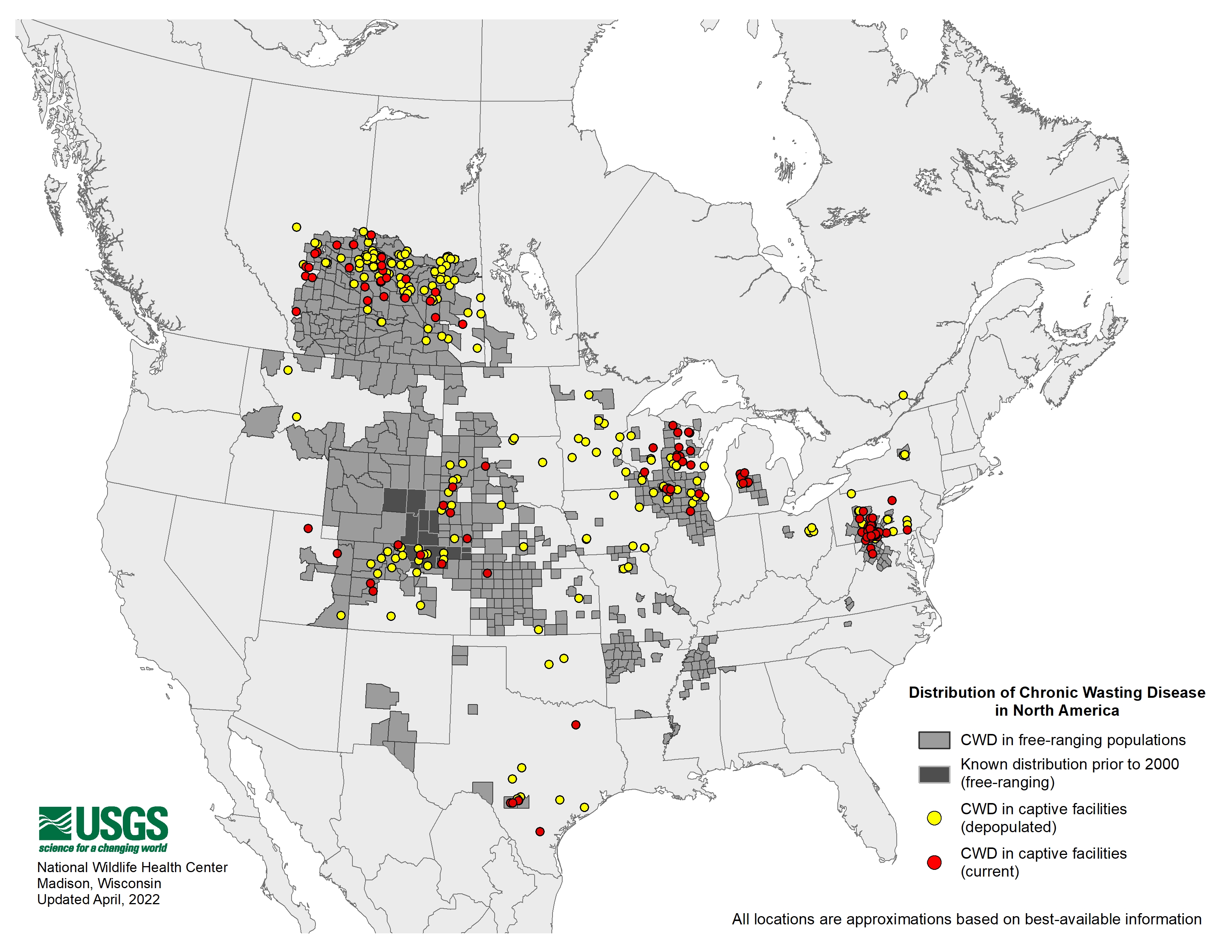 Where does it currently exist?

As of May 1, 2022, CWD in deer, elk and/or moose has been reported in these US states and Canadian provinces:

How can I help keep CWD out of Georgia?

The movement of live animals is the greatest risk factor for introducing CWD. Because there is no reliable test commercially available to check for CWD in living deer, deer movements pose a high risk for moving animals that may be shedding prions but not yet showing symptoms of the disease. Therefore, the live importation of all deer species from other states has been prohibited since 2005. Additionally, Georgia hunters hunting in other states may only bring home boned out meat, hides, skulls or skull caps with antlers attached and all soft tissue removed (velvet antlers are okay), jawbones with no soft tissue, elk ivories, and finished taxidermy mounts. All other carcass parts must be left behind.

Concentrating deer and increasing their exposure to each other’s saliva and other body fluids directly or on food also increases the risk of disease spread among deer. In particular, providing corn, protein feed, or other feed increases the possibility of direct contact with an infected individual or the body fluids of that animal, particularly saliva. Feeders that spread feed, such as spin feeders, and food plots pose less risk of saliva transfer than trough style or gravitational feeders. Although CWD prions can be found in the urine of infected animals there has been no documented spread of the disease through use of natural deer urine attractants.

What is the Department doing?

WRD has been collecting and testing samples from sick and hunter-killed deer in Georgia since 2002 and so far have not found any CWD positive deer. However, it is possible that it could be here and has not been found yet. Our surveillance plan is designed to detect CWD soon after introduction and we will continue to sample and test both visibly sick and apparently healthy hunter-harvested deer annually.

What should I do if I suspect an animal has CWD?

If you observe a deer showing the symptoms described above, please contact your local Game Management office.

In addition to State regulations, Federal rules apply to the taking, possession, shipping, transporting, and storing of migratory game birds.

During the most recent legislative session a law was passed that permits the release of pen-reared quail on private land for the purposes of training pointing, flushing and retrieving dogs.

Information on feral hogs to assist in population management on your land.

Information and hunting resources on migratory birds in Georgia.