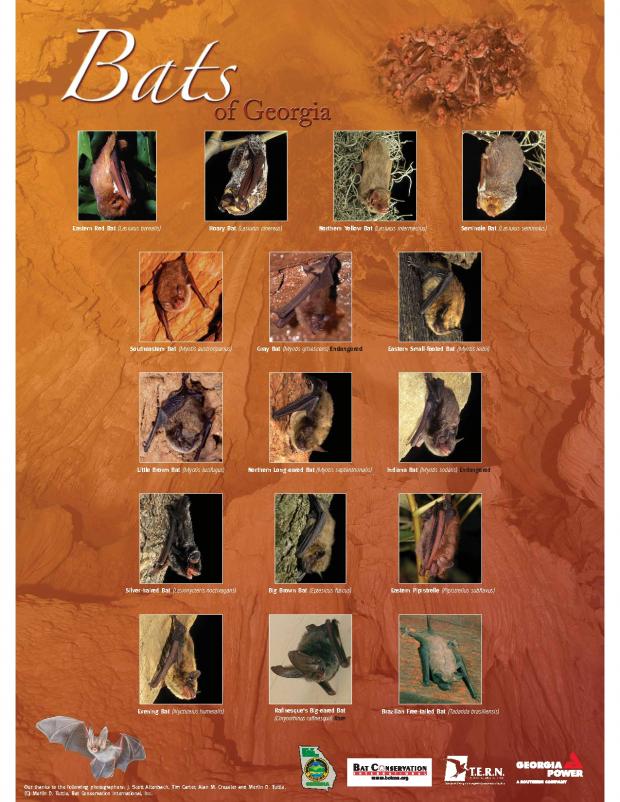 Georgia is home to 16 species of bats! Bats are a valuable and fascinating part of Georgia's natural heritage. They provide a beneficial service by foraging on flying insects, many of which are pests. A single bat can eat hundreds of mosquitoes in one hour. They also eat large numbers of moths and beetles that cause agricultural damage.

Bats will opportunistically roost and forage in altered habitats such as suburban and agricultural landscapes. A few species, however, have specific habitat needs, such as caves with suitable temperature and humidity, or large, hollow bottomland trees. Populations of these species are more vulnerable to habitat alterations and are of conservation concern. Other factors impacting bat populations include pesticides and water quality that impact aquatic-based food supplies, wind energy and as of the mid-2000s, a disease known as white-nose syndrome.

In winter 2006–2007, New York State Department of Environmental Conservation biologists began getting calls about bats flying erratically outside their hibernacula during the day. The bats were supposed to remain in the hibernation areas until spring and the insects that sustain them returned.

Information on conducting surveys and requirements for specific projects.

Georgia is participating in a volunteer-based, nationwide acoustic survey effort to collect long-term data about bats.

Bats in Your House?

Bats in the belfry? What to do if you have bats in your house.

The many benefits of prescribed fire on Georgia forestland are being recognized Feb. 2–8 during "Prescribed Fire Awareness Week."

More than 6,300 new acres at the Canoochee Sandhills Wildlife Management Area, located in Bulloch and Bryan Counties, is now available for southeast Georgia outdoor enthusiasts, thanks to the partn