Out My Backdoor: The Wondrous Pokeberry

One of the most fascinating and valuable plants in my backyard is not found in a flower bed, nor is it watered or fertilized. It grows in a narrow, undeveloped border between my yard and my neighbor’s garden. Here you will find an ungainly plant that some might consider nothing more than a weed on steroids. Most Georgians call this native plant pokeberry, pokeweed, poke, poke salad, pigeonberry or inkberry. 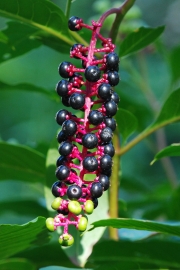 Pokeberry is a perennial herb that can reach a height of 20 feet or more, though most never grow more than 4 to 12 feet tall. The plant’s stems are magenta and its leaves are lance-shaped.

I didn’t plant the common pokeweed plants that have colonized my property. I’m sure that birds unwittingly scattered the black, extremely hard seeds for me. Each pokeberry gulped down by a hungry bird contains 10 seeds which remain unscathed as they pass through a bird’s digestive system. The seed coat is so hard that pokeberry seeds can remain viable for 40 years.

Pokeweed is a host plant for the stunning giant leopard moth. Ruby-throated hummingbirds will nectar at the plant’s tiny greenish white blossoms, and during spring and early summer white-tailed deer will nibble on its leaves and stems. However, most wild animals don’t pay pokeweed much attention until its juicy, purplish-black berries begin ripening in August and September.

From then until the last shriveled berry disappears in late winter, pokeberries are eaten by an impressive list of critters.

Knowing this, if you will keep an eye on a pokeweed laden with ripe berries, you will be able to see and photograph a number of different kinds of wildlife as they feed. It has been my experience that even though deer, gray foxes, opossums, raccoons and a number of other mammals eat pokeberries, I rarely see them feeding on the berries or leaves. This is because these animals are more likely to eat at night when I am either watching television or sound asleep.

Last winter, on a blustery, cold morning, my luck changed. While I was attempting to photograph dark-eyed juncos feeding on minute goldenrod seeds, I saw a tangle of dead vegetation move. I immediately turned my attention to the spot where I saw the dead plant stems shudder. After a brief wait, much to my surprise, a hispid cotton rat emerged and scampered to a nearby pokeberry plant.

Freezing weather had reduced the plant to a mere skeleton. However, a few drooping branches were still festooned with clusters of wrinkled pokeberries. By standing on its hind legs and reaching upward, the hungry cotton rat was able to reach the berries closest to the ground. After quickly devouring them, the still hungry mammal then tried to reach the remaining berries. After several unsuccessful attempts, it finally grabbed the stem holding the berries and hung suspended above the ground. This ploy enabled the rat to reach a few of the remaining berries before it dropped back to earth. 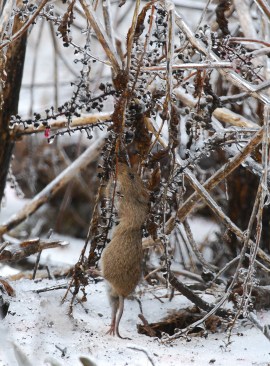 The birds that you are most apt to see dining on pokeberries are year-round residents such as northern mockingbirds, brown thrashers, eastern bluebirds, American crows, cardinals, starlings and red-bellied woodpeckers. In preparation for and during their fall migration, birds that nest in our backyards and elsewhere in North America will also gobble up pokeberries to help fuel the hazardous journey to their wintering grounds in the Caribbean and Central and South America.

The list of these neotropical migrants includes the gray catbird, eastern kingbird, wood thrush, Swainson’s thrush, veery, summer tanager and hooded warbler. Later, when those migratory birds that winter in the state arrive, they won’t pass up an opportunity to dine on what pokeberries remain. These winter residents include the hermit thrush and cedar waxwing, as well as the fox and white-throated sparrow.

However, no list of birds that relish pokeberries would be complete without the mourning dove. While you may have thought mourning doves only eat seeds, wildlife biologists and hunters alike have long recognized pokeberries as an important late-summer and fall food for this Georgia’s most popular game bird.

Eating pokeberries can pose a risk for birds, particularly late in the year. It seems that pokeberries will sometimes ferment, intoxicating birds that eat them.

Although all parts of the pokeweed – berries, roots, leaves and stems – are poisonous to humans, some folks take the risk of eating poke salad each spring. It seems that when the plants first emerge from the ground, the tender stems and leaves are picked to prepare a traditional spring delicacy known as “poke salit.” Supposedly by repeatedly boiling the leaves and stems and throwing away the water used between cooking, the poison is removed.

However, many food specialists warn against this practice. They contend that in spite of the boiling, some poison can still remain in the stems and leaves. With that in mind, I don’t recommend trying it.

Humans have found a number of other uses for pokeweed. For example, the pokeberry’s red juice was once used as a dye. Native Americans are said to have decorated their horses with it. Early settlers placed fermented pokeberries in a hollowed-out pumpkin to prepare a concoction used to color cloth.

The next time you go to a museum and see letters and journals written during the War Between the States, any writing that appears to be penned with brown ink was probably done with pokeberry ink, which turns brown with age.

The pokeberry is also the subject of an interesting historical footnote. It seems some supporters of James Polk, the 11th president of the United States, mistakenly thought pokeberry was named for the president. As such, they would often wear springs of pokeweed on their lapels or around their neck in his honor.

Pokeweed has long been thought to have medicinal value. At one time it was employed to cure everything from boils to acne. Today, pokeberry is being researched as a possible treatment for cancer. According to the American Cancer Society, a chemical found in pokeberry juice has been used to successfully treat cancerous tumors in laboratory mice. The chemical is also being tested to determine if it can protect cells from HIV and AIDS.

Remarkably, the lowly pokeberry may help solve the energy crisis. Researchers at Wake Forest University have discovered that a dye derived from pokeberries doubles the efficiency of fibers used in solar cells to absorb solar energy.

Although pokeberries are rarely used in landscape designs in this country, such is not the case in Europe. The naturalized plant’s shiny dark berries, attractive foliage and colorful stems are helping earn it a place in European gardens.

I hope that if you have pokeberry plants trying to colonize an out-of-the way spot in your yard, you will let them grow. If you do, you will be rewarded with an attractive plant, a great source of food for wildlife, and more opportunities to watch and photograph wild animals, as well as something that you can use to teach your children and grandchildren lessons about history, science, and medicine.

You can even use pokeberry to teach them about times when something that appears to have little value can turn out to be a real treasure.