Out My Backdoor: Windows -- an Invisible Threat to Birds

Even if you are not a wildlife enthusiast, you have probably heard a heavy "thump" coming from outside your house. When you hear this sickening sound, you know it can only mean one thing – a bird has flown into a window. 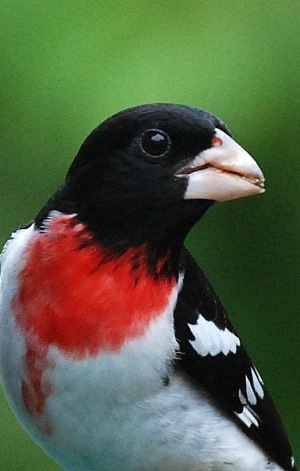 A few weeks ago as soon as my wife and I heard this unmistakable sound I walked outside expecting to find one of the dozens of common grackles or brown-headed cowbirds that had been eating more than their share of the seeds from our feeders. I was both surprised and dismayed to find a beautiful male rose-breasted grosbeak weakly trying to hop away. This spring we had seen only three rose-breasted grosbeaks in our yard.

As I gently picked up the stunned bird, I could not help but lament over the fact that a bird that had survived the perilous journey from its winter home – located somewhere from southern Mexico southward to Ecuador and Venezuela – now faced a life-threatening accident in my backyard.

A quick examination of the groggy bird failed to reveal any broken bones. The fact that it could hop and sit upright were encouraging signs. I began to believe that the bird just might survive his crash.

I took him inside and placed him in a small box. I then loosely closed the top of the box and put it in a dark corner of our cool sunroom. After waiting about a half an hour, my wife slowly opened the box to see how the grosbeak was doing. As soon as he saw the light, he began to flutter about. I knew that it was time to release him.

I carried the box outside and slowly opened the lid. When I tilted the box sideways, the grosbeak launched himself into the air. I must confess, we were so happy when he took wing we cheered as we watched the handsome black, white and red bird disappear into the foliage of a nearby tree.

This bird was lucky. Studies have shown that only about half of the birds that strike windows survive the ordeal.

Birds have been flying into windows probably for as long as glass windows have been mounted in buildings. In the United States, the first documented case of a bird smacking into a window occurred in 1832: A sharp-shinned hawk crashed through two windows in a greenhouse while pursuing a bird.

Since that time, the list of birds known to strike windows has swelled to more than 220 other species. The list contains some 25 percent of all of the bird species known to occur in North America.

While it stands to reason that these collisions are most common in spring when thousands of young, inexperienced birds are just learning to fly, researchers tell us such is not the case. Actually, the total numbers of birds smacking into windows is fairly evenly distributed throughout all four seasons.

However, as you might expect, seed-eating birds make up a disproportionately greater number of the birds that strike windows in winter, the time of year when the largest number of people feed birds. By the same token, migrants that pass through our backyards during their spring and fall migrations collide most often with windows at these times of the year.

Both weather and time of day seem to have an influence on bird/window collisions. The vast majority of bird strikes occur when the weather is clear. In addition, birds are more likely to fly into windows in the morning than in the afternoon or evening.

Birds striking windows are not isolated occurrences. The severity of this problem is staggering. The U.S. Fish and Wildlife Service estimates that as many as 1 billion birds are killed annually when they crash into windows mounted in homes, office buildings and stores.

One of the most common reasons why birds fly into windows is because window glass reflects images of the surrounding trees, flowers, shrubs and sky. For this reason, as birds fly toward windows, they often don't realize that a pane of glass is in their flight path.

There are few things you can do to reduce the number of bird strikes that occur at your home.

Install a screen or hang a piece of 5/8-inch bird netting about two to three inches from a window. These materials eliminate reflections. In addition, if a bird happens to fly into the screen or netting it will often simply bounce off.

Large picture windows receive the most hits. These windows are typically mounted parallel to the wall of a building. 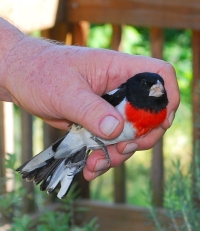 However, at nature centers and even at the homes of some bird fanciers, the windows facing observation areas are often installed at a slight angle. The angle can be easily created by mounting the bottom of the glass at least 6 inches closer to the inside of the house. A window installed in such a manner will reduce reflections of the surrounding area.

Recently, special transparent vinyl films have become popular. Remarkably, when affixed to the outside of a window pane and when viewed from the outside, the window appears opaque. However, when you peer through the film from inside the view is not obstructed.

Others approach the problem by taping silhouettes of hawks or other birds to their outside windows. Since birds recognize the shape of a hawk as a something to avoid, they often steer clear of a window equipped with a hawk silhouette.

Decals of spider webs and other designs also alert birds to the presence of a window. Some people claim that hanging sun catchers in their windows serves the same purpose.

Some people have reported success by simply splashing soapy water on a window. Once the mixture dries, the window pane is covered with cloudy spots.

You can even buy ultraviolet window decals that can be seen by birds but not humans.

Hanging feathers or pieces of foil or tape to the outside of a window will also alert birds to the presence of glass.

If birds strike your windows from time to time, try one of these suggestions. Who knows how many birds you will save?