Out My Backdoor: When Insects Pose Problems at Hummer Feeders 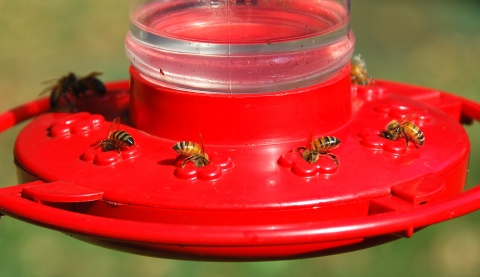 Most Georgia hummingbird enthusiasts are delighted that the numbers of hummingbirds visiting their feeders are increasing weekly. On the downside, more ants, yellow jackets, honeybees and wasps are also converging on feeders in search of a sugary meal. This can cause problems for hummingbirds and humans alike.

If you are trying to thwart an invasion of these relentless pests, here are some battle strategies that some of our fellow Georgians are employing to keep these unwelcomed invaders from their hummingbird feeders.

For many years, the only way we could stave off an army of ants trying to take control of a feeder was by smearing grease on the shepherd's hook or pole supporting a feeder. This technique works because ants typically avoid crawling across sticky grease. However, applying the grease is a messy proposition at best. In addition, some homeowners find a pole smeared with grease to be unattractive.

Grease works best on metal poles. Yet I have found that when dabbed on wood poles, some types of grease are absorbed by the wood. Consequently, to remain effective, it must be continually reapplied.

During the latter part of the 20th century an unknown inventor came up with something called the ant moat. This remarkably simple device has proven an improvement over grease. 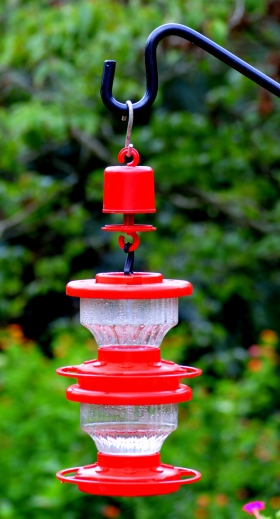 The ant moat looks much like the removable top of an aerosol can. A piece of heavy wire runs through the center of the bottom of the moat. This wire is bent to form hooks above and below the moat. This permits the moat to be attached to the structure, providing support for the feeder while the feeder attaches to the bottom hook. When in place, water is poured into the moat.

Some of the newer models of hummingbird feeders have an ant moat built into the top of the feeder.

This device is able to stymie ants trying to reach a feeder because the troublesome insects must cross the water-filled moat to reach the feeder. Fortunately, most ants don't want to dip their six legs into the water. When they reach the edge of the water, they do an about face and retreat.

Ant moats can be bought or made at home. If you make your own, make sure you seal the spot where the wire runs through the bottom of the moat.

If you use an ant moat, you will notice that the water disappears over time. Some water is lost to evaporation. Birds will also drink it. It’s a good idea to empty the water every few days. This prevents mosquito larvae from living in the water.

If you don't want to deal with a water-filled moat, you can make a mini-moat using the plastic top found on a soft drink bottle. Simply run a stiff wire through the center of the top. Twist a hook on each end of the wire. Then fill the small lid with petroleum jelly or grease. Place the device above the feeder with the grease-filled side of the moat facing up.

In recent years, devices containing ant repellent have shown up in stores. Like moats, they are designed to be placed between the structure holding the feeder and the feeder itself. They are nothing more than plastic shells containing disks impregnated with an insecticide such as permethrin. The manufacturers claim that the chemicals do not pose a threat to ants, birds or other wildlife. The chemicals contained within the disks act as an ant repellent.

After reading reports that some people using these devices have enjoyed great success keeping ants out of their feeders for years, I recently tried them myself. I am happy to report that during the short time I have used them, no ants have reached my feeders. It will be interesting to see how long they remain effective.

Keeping bees, hornets and their kin away from feeders requires different strategies. Some hummingbird feeders are equipped with bee guards. The bright yellow guards fit over the feeder's feeding stations, increasing the distance to the nectar.

Since a hummingbird has both a long tongue and bill, it can stick its bill through one of the holes in the waffle-like guard and easily drink the sugar water in the feeder. However, because bees have short "tongues," they cannot reach the sugary liquid.

Bees can also be kept away by smearing vegetable oil over the surface of the feeder adjacent to feeding portals with a cotton swab. Since bees do not like to walk on greasy surfaces, they stay away.

Vegetable oil can also be sprayed around a feeder's dining areas. However, if you decide to use a vegetable oil spray, do not spray the perches.

In late summer, yellow jackets pose a real danger for both hummingbirds and the people who maintain feeders. Neither we nor the birds want to be stung. With that in mind, a yellow jacket trap will reduce the numbers of these stinging insects swirling around your feeders.

A trap can be made by cutting four 1-inch holes equidistant apart about half way up the side a plastic, two-liter soft drink bottle. Fill the bottom of the bottle with nectar to a depth of about two inches. Then add a few drops of liquid soap. Hang the trap near your hummingbird feeders.

The stinging insects will enter the trap and drown. The trap containing the dead insects can then be safely discarded.

A word of caution, though: Don't use a trap if honeybees are congregating around your feeders. The last thing you want to do is destroy these valuable insects.

I suspect that unwanted insect pests have been plaguing hummingbird feeders since the first hummingbird feeder was hung up in a New England backyard more than a century ago. If you are one of the millions of people who have unsuccessfully battled these unrelenting marauders, you now have the know-how needed to turn defeat into victory.