Out My Backdoor: What's the Best Bluebird Box Design?

We Americans don’t ever seem satisfied. Take bluebird boxes, for example. While the basic design has remained relatively unchanged for years, we are constantly seeking the perfect bluebird box.

Although such a structure may be a pipe dream, wildlife biologists are inching closer to that goal. Let’s take peek at some of the innovations researchers have come up with.

Most bluebird nesting boxes sport a round entrance hole that measures 1½ inches in diameter. While I don’t claim to know the reason why these openings are round, I suspect it is because they are easy to create with a drill bit.

Making an opening that isn’t round requires more work and sometimes involves tools the average person might not have.

Entrance holes to bluebird nesting boxes measure 1½ inches in diameter because this size prevents European starlings from entering. Starlings compete with bluebirds for scarce nesting sites. In fact, the spread of this alien cavity nester played a key role in decimating bluebird populations during the first few decades of the 20th century. Unfortunately, starlings are still a serious problem.

While 1½-inch holes will stymie starlings, another alien invader, the house sparrow, passes through them with ease.

There are only two effective way 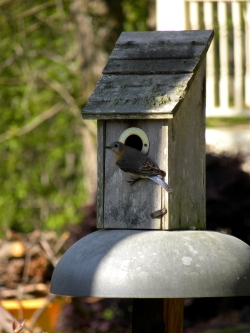 s to thwart these serious nest-box competitors: You can repeatedly destroy their nests as they are built or trap nesting house sparrows with a specially-designed device that fits over the entrance hole.

A few decades ago, another bluebird box burst onto the scene: the slot box. This design features a narrow 1½-inch slot that runs across the entire front of the box. In some studies, bluebirds preferred these boxes over traditional nesting structures. Findings suggest that bluebirds nesting in slot boxes also fledge more young than bluebirds in standard nesting boxes.

Some 25 years ago, another innovative box followed. It was called the Gilwood box. Initial studies suggested the Gilwood box marked an improvement over other nest-box designs. This unusual, wedge-shaped box is smaller than most bluebird boxes. Nesting bluebirds enter through a 2¼-inch, U-shaped hole directly beneath the flat roof.

The size of the entrance hole can be adjusted from 1¼ to 1 3/8 inches by bending a stiff wire that runs from side to side across the U-shaped entrance hole. In studies conducted in New York, bluebirds preferred this box 6-to-1 over boxes with round entrance holes. In another study, biologists compared bluebirds’ use of boxes featuring oval entrance holes to boxes with round holes. They found that, when given a choice, eastern bluebirds consistently chose to nest in boxes with oval holes measuring 2 inches tall and 1 3/8 inches wide. (Oval holes can easily be fashioned by drilling two overlapping holes using a 1 3/8-inch drill bit.)

While it is true that starlings can enter a box with an oval hole of this size, the problem can be remedied by building boxes that are only 5 inches deep and have floors that measure 4-by-3 inches. The dimensions of the floors in traditional bluebird boxes are typically 4-by-5 inches. The distance of the floor from the bottom of the entrance hole in a standard bluebird box is typically 5 to 6 inches.

Fortunately, house sparrows seem to prefer to nest in boxes with round holes rather than boxes with slots or oval entrance holes.

Biologists have found that starlings can also be discouraged from using these boxes by installing a 1/16-inch shim on one side of the oval hole. This works because bluebirds can slip into a hole only 1¼-inch wide while starlings cannot.

I would be remiss if I didn’t tell you that these studies were conducted in the Northeast. There is no guarantee these types of nesting boxes are preferred by bluebirds in the South. Yet, with that in mind, I urge you to try one or more of the three different designs I have described here.

And after the nesting season, let me know what you found.

The art of backyard wildlife management is in its infancy. Consequently, the opportunities for wildlife enthusiasts to contribute to our knowledge of backyard habitat management are limitless. Evaluating the value of various types of bluebird nesting boxes is but one way to use your backyard as an outdoor laboratory.

P.S.: If you’ve been unable to attract bluebirds to your boxes, consider trying one of these designs. Even if have bluebirds nesting in your yard, you might want to erect a few boxes featuring one of the three designs and see which box your bluebirds prefer.