Out My Backdoor: Searching for Fragile Treasures

As far as backyards go, mine is far from the largest, best trimmed or, in the eyes of many, the most beautiful. However, I would not trade it for any other.

In spite of its unassuming appearance it is a place where treasure has been found. Although I am not talking about jewels or gold coins, the discoveries made in my yard are still priceless. They make up a treasure trove of family experiences with the plants and animals that live just outside my backdoor. My wife and I have never used a treasure map to guide my daughter and granddaughter on backyard journeys of discovery. In fact, more often than not, some of our best finds have been made serendipitously. 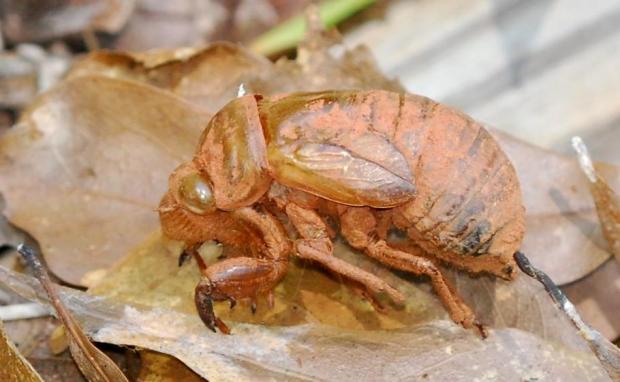 When the girls were younger, we were their guides, teaching them to use their senses of sight, hearing, smell and touch when outdoors. However, it didn’t take them long to begin venturing out and making their own finds. Now the distinction between the guide and the guided is often blurred.

For example, last summer our then 8-year-old granddaughter happened to notice the light brownish nymphal skin shed by a recently emerged adult cicada (often called a locust) attached to a pillar beneath my home office. Immediately she wanted to know what it was. I explained to her about the insects whose buzzing mating calls are one of the sounds of summer. My wife went on to suggest that she might find others if she looked around the yard. Soon, we noticed her looking for other shed skins on the trunks of trees. In short time she had dozens of the fragile casings.

Later that evening my wife found that she had neatly lined up her discoveries on a shelf in her bedroom. What might have been overlooked and considered valueless by most are undoubtedly treasures to her.

The cicada is just the most recent in a long list of animals the girls have encountered on backyard forays. Years ago, my wife introduced our daughter to the ant lion, or doodle bug. She pointed out how these strange little creatures excavate sandy funnels and wait at the bottom for a hapless ant or other small insect to venture into its deadly trap. She demonstrated how you can coax the doodle bug from its hiding place by gently stroking the sides of the funnel with a blade of grass while repeating, “Doodle bug, doodle bug, come out, your house is on fire.”

I will never forget teaching my granddaughter how to use a spin casting rod. I tied a rubber worm to the line and let her practice casting. As she slowly reeled in the artificial worm after a long cast, an American robin, apparently mistaking the lure for the real thing, flew down and chased it back toward us. The expression on my granddaughter’s face as she watched the bird’s antics are forever etched in my memory.

Over the years the girls have helped me build and paint countless nest boxes. They are excited when bluebirds, nuthatches or chickadees use one, and always enjoy peeking inside the boxes for quick glimpses of fragile eggs and fuzzy nestlings.

They enjoy helping me restock our bird feeders and watching a veritable parade of birds that dine at my wildlife smorgasbord. And they seem to take delight at my often futile attempts to thwart gray squirrels from eating more than their share of my seed offering.

The wild and cultivated plants growing in our yard have always fascinated the girls. They enjoy looking for the first crocus poking out of the ground in the spring, admiring the beauty of a dogwood blossom, sucking nectar from a honeysuckle bloom and collecting fall leaves that seemed to be dipped in a kaleidoscope of colors.

The girls have also discovered that birds, deer and other critters enjoy eating the apples, pears, blueberries and figs that ripen in our yard as much as we do. One summer day my wife and granddaughter were surprised to find that we were sharing figs with a hummingbird. As they peered out the bedroom window, a hummingbird flew down and dipped its bill into sweet fig juice welling up in a hole punched in a fig by a summer tanager.

Our outdoor adventures don’t stop when the sun goes down. Even on cold winter nights we venture out to view the constellations, comets and falling stars. In the spring we sit outside listening for the calls of whip-poor-wills and chuck-will’s widows. In summer, we all enjoy watching fire flies blinking as they slowly navigate across the yard.

My granddaughter enjoys catching toads at night. Once caught, each toad is closely examined and released to continue its nocturnal search for insects.

For the past three years, my daughter and granddaughter have joined me in trying to attract moths and other nighttime insects with a sheet illuminated by a blacklight. I am sure that my neighbors and people driving past my yard wonder what in the world we are doing as we move about in the darkness around an eerie blue light. Through the magic of the black light we have discovered scores of beautiful and odd-looking moths as well as some of the strangest looking beetles, leafhoppers and other insects you could ever imagine.

Space has allowed me to share only a smattering of priceless treasures my family has found in our backyard season after season, year after year. Summer is a great time to strike out on your own journey of discovery with your own able-bodied crew of children and grandchildren. You will be amazed how the discovery of something as small as a lady bug can stimulate their curiosity for the natural world. Seeing their expressions as they find a backyard treasure is something you will never forget.

If all goes well, and I know it will, they will soon be asking you when they can go again. It is then that you will realize you are having as much fun as they are. Additionally, as you heighten their sense of wonder and appreciation for those plants and animals with which they share the world, you are giving them a treasure beyond compare.