Out My Backdoor: The Scouts Are Here!

For more years than I care to remember, I have vainly tried to entice purple martins to nest in my yard. Each year during the late winter or early spring, a handful of purple martins magically appear at my martin house.

When these early migrants show up, my hopes run high that this will be the year I will become a purple martin landlord. My high expectations are dashed in a few days when the birds disappear, never to return. 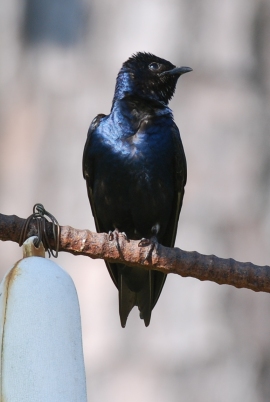 The first purple martins to arrive in our backyards are called scouts. This name is attributed to the popular belief that these birds are "scouting" for suitable places to nest. Supposedly once the birds find suitable places to nest, they fly all the way back to their wintering grounds in South America's Amazon Basin and lead the rest of martins back to sites selected.

Now that would be something special! However, as much as we might like to believe this fanciful tale, such is not the case.

Scouts are simply older martins that take off on their spring migration long before younger martins. Although scouts can be either male or female, most are males. The only thing they have in common is that they are the oldest birds in the population.

Scouts are seen in south Georgia as early as January. This year, the earliest sighting I am aware of took place in Moultrie on Jan. 15.Typically, scouts reach middle Georgia by Feb. 1 and the rest of the state, with the exception of northeast Georgia, by Feb. 15. In the northeastern corner of the Peach State, the birds usually appear by March 1.

According to the Purple Martin Conservation Association, data collected over the past 100 years reveal that scout arrival dates can vary by 30 days or more. A host of factors such as weather, food supply and conditions in the wintering grounds are thought to affect  when the scout first appear.

Whether or not these early travelers remain at the nesting structures we have erected for them depends on where they  have previously nested. If they have nested there, they will stay. If they nested elsewhere, they will move on to that place.

When a scout shows up in your backyard, it may initially spend very little time there. It might inspect a few nesting cavities and then spend the remainder of the day feeding. If the bird has indeed returned to its former nesting territory, how long it remains depends on the weather.

If the weather is so cold that few insects are on the wing, it may retreat to warmer climes where flying insects are more abundant. If, on the other hand, the weather is balmy and food is plentiful, there is a high likelihood the scout will linger close by until other martins arrive.

Sub-adult martins begin arriving back in Georgia some four to six weeks after the scouts have made their appearance. In fact, other members of a colony arrive on their breeding grounds over a period of three to four months. One reason for this is that the birds  that comprise a nesting colony are not necessarily related. As such, the timing of their spring migration can vary widely.

At this time of year a scout can show up at any time of the day. However, there are ways that you can enhance your chances of seeing the first purple martin of the year. Martins will often appear with the arrival of a low-pressure system. If a bird does fly in with such a front, it will sometimes remain secluded in a nesting cavity until the weather clears. Consequently, the only way you are going to know the bird is there is to gently tap on the pole that supports the gourds or house.  If the bird is present, it will fly out.

Many times a scout is heard before it is seen. Therefore, whenever you are outside doing chores in the yard, from time to time stop and listen for the bird's unmistakable low-pitched chirruping call. If you hear it, look skyward – the bird is likely soaring high above!

The best time of the day to spot the first scout of the year is first thing in the morning. However, it also pays to take a peek out your window several times a day during your agonizingly long wait for the year's first purple martin.

While you might find it disappointing to learn that purple martin scouts don't actually lead the rest of their flocks back to our backyards, there are many amazing facets of the life history of this, our largest, swallow. The fact that purple martins can find the backyard where they nested after flying thousands of miles from the interior of South America without the aid of a map, compass or GPS is pretty remarkable in itself!