Out My Backdoor: Save a Spot in the Yard for Strawberry Bush 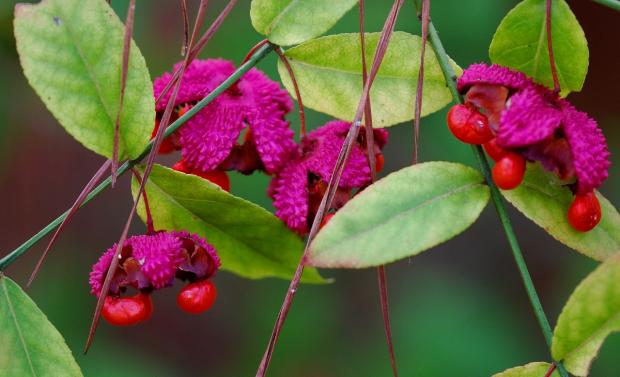 I consider the strawberry bush (Euonymous Americana) one our most beautiful native shrubs, and deserving of a place in home landscapes across the state. If you are not familiar with this plant, all it would take is for me to show you one laden with its attractive seed capsules and you would immediately agree with me.

The strawberry bush is known by several unusual names including wahoo, burning bush, bursting heart, hearts-a-bursting and hearts-bustin'-with-love. Regardless of what you call it, during the late summer and fall it is truly one of the most beautiful plants gracing Georgia's woodlands.

The strawberry bush is a native deciduous shrub that can grow 6 to 12 feet tall. It can often be found growing along streams, with its roots anchored in damp, rich soil. By the same token, it also grows in upland and lowland sites.

This is one plant that will grow in full shade. However, strawberry bushes living in shady spots often grow slowly and produce few seeds. They much prefer sites bathed in partial sunlight.

Throughout most of the year the strawberry bush lives in obscurity. Even when it is in full bloom, its small yellowish green blooms are so inconspicuous that they remain hidden in full sight.

During spring and summer, the shrub is cloaked in brown, lance-shaped, serrated leaves displayed on green stems and branches. The seeds are borne in 1-inch, warty capsules that typically contain four to five berries. As summer progresses, the green capsules grow and eventually turn pinkish red.
While it is said that the plant's name stems from the fact that the capsules somewhat resemble strawberries, I have always thought that they look more like raspberries.

Sometime during September and October, the capsules split, revealing scarlet-red berries hanging on thread-like filaments. The appearance of the open capsules and red berries apparently gave rise to the plant's name hearts-a-bursting.

Strawberry bush is not considered an important wildlife food plant. This may stem from the fact that it is rarely found in abundance. However, the bush's red, pulpy seeds are devoured by songbirds such as the eastern bluebird, wood thrush and northern mockingbird. Wild turkeys and small mammals also dine on the red berries. Additionally, the tiny flowers offer nectar to hummingbirds, bees and butterflies. In addition, eastern cottontails and white-tailed deer dine on the plant's leaves, bark and stems.

It interesting to note that deer like the plant so much strawberry bush is sometimes referred to as deer ice cream. Whitetails simply cannot get enough of it; they will literally browse it down to the ground. As a result, strawberry bush is one of the first woodland plants to disappear when deer populations are extremely high. For that reason, in some locales the only strawberry bushes that you can find are those growing in yards not frequented by whitetails.

Early colonists considered the plant so beautiful it became one of the first North American plants sent back to Europe for use in ornamental gardens as early as 1663.

Long before the first Europeans set foot in the New World, American Indians valued the strawberry bush for its therapeutic value. It is said that they used the roots of the plant to brew a tea for treating maladies of both the urinary tract and stomach. Later, various parts of the plant were used to treat dandruff, constipation, malaria and liver disorders.

The bark and fruit of the strawberry bush should never be eaten, as some experts have reported that chemicals contained in these parts of the plant may cause cardiac arrest and severe diarrhea.
Strawberry bush is an ideal plant for home landscapes. Nowadays, strawberry bush can be bought from reputable wild plant dealers. The plants can also be established from digging up root clumps and transplanting them in winter to your yard. However, I don't recommend that you move this plant from the wild unless you are participating in a native-plant rescue.

If you know what you are doing, you can also propagate strawberry bush from seed. However, since the seeds are difficult to germinate, I would not recommend trying this.

I hope you will find a place for this beautiful native shrub in your yard. If you do, strawberry bush will quickly become a conversation piece, adding diversity to the flora in your yard and providing an unusual bit of color to your fall landscape.