Out My Backdoor: Red Buckeye -- a Hummingbird Favorite 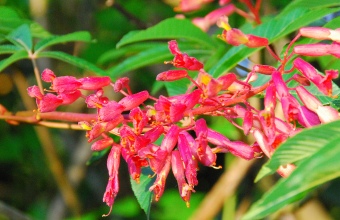 If you ask a hummingbird enthusiast to name the flowers they plant for hummingbirds, more than likely they will reel off the names of plants such as Lady In Red salvia, lantana, pineapple sage, Turk's cap and coral honeysuckle, to name but a few.

Rarely, however, do they mention the red buckeye. This is unfortunate because this stunning beauty is better known for its distinctive seeds, which many believe do indeed look like the eye of a buck deer, than its beautiful, nectar-laden flowers.

The red buckeye is a native plant that grows beneath the canopy of forests in Georgia’s Coastal Plain and lower Piedmont. The plant has, however, been widely introduced throughout much of the rest of the state.

Depending on where it grows, the red buckeye typically looks like a small shrub. When it takes root in the shade it typically takes on the form of a small shrub. However, when grown in fertile soil and full sun, it becomes a tree reaching 25 feet or more high with a trunk measuring 4 to 6 inches in diameter.

As you might expect, buckeyes that grow in full sun produce more blossoms than those relegated to full or partial shade.

The red buckeye’s carmine red blooms are tubular in shape and borne on 4- to 8-inch spikes. These attractive blossoms are quite hardy and will last for several weeks.

For some reason, in my yard hummingbirds are especially fond of visiting the red buckeye's nectar-rich flowers late in the day. In fact, when red buckeyes are blooming I can often be found trying to photograph the birds when it is almost too dark to see them in my camera’s viewfinder.

Other nectar feeders also visit the plant. In my neck of the woods – middle Georgia – these are principally eastern tiger swallowtail butterflies, as well as bumble and carpenter bees.

At first glance, you would think that the plant's 1- to 2-inch, polished dark brown seeds would be a favorite food of seed-eating birds and mammals. Such is not the case. While gray squirrels and other animals do eat buckeyes, it is never a preferred food. In fact, both the seeds and tender young leaves of the plant are said to be poisonous to humans and livestock alike.

Humans have long made use of the red buckeye. Native Americans were known to crush buckeye branches to catch fish. The sap that exudes from the branches drugs fish, making them easier to capture.

Early European settlers made soap from the plant’s roots. Additionally, the bark was used to concoct medicines.

Nowadays, the smooth, hard, glossy seeds of the buckeye are sometimes toted about in pockets as good luck charms or to serve as worry stones.

I am surprised that this attractive plant isn’t seen more often in home landscapes. It has many virtues that should endear the red buckeye to home gardeners. It requires little care, is drought tolerant and is essentially pest-free. It makes an eye-catching border plant. Another plus is that these versatile plants can be grown either in open and shady yards. They can be arranged in groups or planted singly. In addition, although the red buckeye’s foliage doesn’t change color in the fall, throughout the growing season its long, palmate leaves are pleasing to the eye.

Red buckeyes can be established using either transplants or seeds. If you want to try planting the seeds, collect and plant them them before they dry out. This will significantly increase the odds they will germinate.

Consequently, most folks prefer to transplant seedlings. With that in mind, March is a great time to set out one or more young red buckeyes. Check with a nearby nursery that sells native plants. Since red buckeye seedlings are not commonly carried by most nurseries, you might have to do a little detective work to find them. Your best bet is to check with a nursery that deals in native plants.

However, with a little diligence you should be able to locate a source of this native beauty. Believe me; they are well worth the effort. Red buckeyes will certainly add beauty to your yard. In addition, they will quickly become a hummingbird favorite.