Most everyone is familiar with the annual cicada. It is often referred to as the dog day cicada. It earns its name because it is seen and heard during the dog days of summer. If you live in the South, you know what I am referring to: those lazy, hot, humid days that are all too common in July and August. At that time of year these large (2-inch) green, black and brown insects make loud buzzing calls that are one of the most familiar sounds of summer. 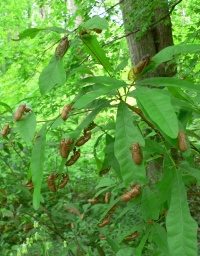 Then there are the periodical cicadas. Although at first glance they look like nothing more than a smaller version of the annual cicada, they are much different. If you take a close look at one you will immediately notice that it sports bright red eyes, a black head, and bodies and transparent wings fringed with orange.

Like the annual cicada, it, too, lives in backyards and forests across much of the state. However, it only makes its presence known when it emerges from the ground. At such times, usually under the cover of darkness, annual cicadas appear in mind-boggling numbers. As many as 1.5 million per acre have been recorded! However, typically their numbers range from tens to hundreds of thousands per acre.

While annual cicadas are seen every summer, periodical cicadas emerge either every 13 or 17 years. Entomologists have identified 12 broods of 17-year cicadas and three broods of 13-year cicadas. Each brood is identified with its own Roman numeral. This is the year for Brood XIX to appear. That means all members of this brood within the 16 states within the brood’s known range will appear at the same time. The range of Brood XIX stretches from Indiana and Maryland to Texas and Georgia.

Georgia hosts only one brood of 13-year cicadas. However, three broods of 17-year cicadas have been identified in the Peach State. They will make their appearance in 2017, 2021 and 2028, respectively.

If you live near close by a hardwood forest in the northern half of the state, I don’t need to tell you that Brood XIX is here. If you live close to them, for a few weeks now as soon as you step outside you hear a sound that could easily pass for the sounds made by aliens in the science fiction movie War of the Worlds.

The billions of insects creating this noise began crawling out of the ground once the soil temperature reached roughly 64 degrees Fahrenheit. Weeks before, the cicada nymphs began preparations for the big event by digging tunnels to the surface of the ground. If you look around your yard, you might find these exits. They will be roughly a ½-inch diameter hole or short mud turret that extends above the soil.

Once the flightless cicadas escape their subterranean home they seek out a vertical structure. This may be a tree, building, shrub or poison ivy plant, or a garden tool propped against a fence. Some climb as high as 10 feet or more. Others are satisfied with something that protrudes just above the ground.

Once they find just the right place, they stop climbing and begin shedding their outer skin, or exoskeleton, for the last time.

If you find one, it is fun watching the insect slowly break loose from its tough outer skin. It somehow fits its entire body through a tiny slit behind its head. When the cicada breaks free, it is snow white with two eyes that look much like tiny bright red rubies. (This process takes some time so instead of watching the whole time, I like to return occasionally to check on the insect’s progress.)

When the cicada leaves its shed skin, it must wait upwards of four to six days before it is ready to fly. However, if you decide to go to bed before the insect leaves, in the morning, all you will find is the shed skin where the drama took place. The young adult will have crawled away to a safer location to complete its maturation.

Once airborne, the adults feed on plants. The males also begin congregating in large numbers. It seems that males are drawn to the calls of other males. In fact, the high-pitched sounds we are now hearing are made only by the males using tiny drum-like structures on the sides of their bodies.

While these sounds don’t sound anything like the crooning of Elvis, Frank Sinatra or Jim Reeves, they obviously strike a chord with female cicadas which come from far and wide to hear the males up close.

After mating, the females lay their rice-shaped eggs in slits cut in the very tips of branches. In some cases, this causes the leaves nearby to die. However, this is rarely detrimental to the tree.

Once the eggs hatch, the cicada nymphs topple to the ground where they don’t waste any time burrowing into the soil that will be their home for the next 13 years. Remarkably, the 13-year cicadas we are now hearing hatched in 1998. Back then it cost only 32¢ to mail a letter and gasoline was but $1.06 a gallon.

As you might imagine, a lot of critters just can’t get their fill of cicadas. To them, it is like hamburgers falling from the sky. The nymphs are also a favorite of burrowing animals like moles. Wildlife biologists have found that mole populations seem to surge just prior to when the cicadas emerge. On the other side of the coin, they plummet after the mass exodus of cicadas from their underground homes.

The crunchy adults are also devoured by everything from squirrels and spiders to turtles, fish and snakes. One insect, known as the cicada killer, specializes in eating cicadas. Naturally, insect-eating birds don’t pass up a chance to nab one of these critters. Among the birds that eat adult cicadas are wild turkeys, grackles, robins and woodpeckers. I have seen summer tanagers and blue jays capture cicadas in my backyard. Since cicadas will produce a shrill call when caught, if you hear what sounds like a cicada’s distress call, look toward the area where the call is coming from and you might spot a bird devouring one of the large insects.

If you are one of those folks that look for new culinary delights, you might want to try eating one yourself. There are those who say that cicadas are a great high-protein, low-fat snack. It said that they are best when harvested when they first come out of the ground. Those brave enough to try one claim they taste much like asparagus or a clam-flavored potato. I just wonder why somebody would know what a clam-flavored potato tastes like. Anyway, it you don’t want to eat one straight, you might try dipping it in chocolate or try one of the many cicada recipes that you can find online.

Eating cicadas isn’t anything new. Since there are some 3,000 species of cicadas found around the world, they have long been eaten by people of many cultures. Native Americans ate them. Some tribes liked them fried. Others burned off the insects’ wings and legs then sprinkled them with salt before frying. Eaten this way, they are said to taste like crackerjacks, popcorn or peanuts.

Fortunately for us, cicadas don’t bite, and they rarely harm plants. Also, as they die, their bodies recycle nutrients back into the soil.

With that said, for the next several weeks, we are going to have to listen to the love songs of male cicadas just outside our backdoor. In the meantime, we can ponder what gasoline will cost when Brood XIX reappears in 13 years.