Out My Backdoor: Our Modern-day Dinosaurs

Due in large part to the amazing popularity of the film Jurassic World, Georgians of all ages have once again become fascinated with dinosaurs. Although the thunder lizards have been extinct for millions of years, modern day lizards, distant relatives of these often-mammoth beasts, lurk close to mankind.

A few of these amazing creatures even live in our backyards, where the vast majority goes about their lives out of the sight and mind of most homeowners. Yes indeed, if you live anywhere in the Peach State, except in extreme northeast Georgia, there is a good possibility that the lizards lurking in your backyard are green anoles.

All green anoles possess dewlaps hanging from the underside of their heads. The male’s dewlap is pink to red in color, while the female’s is white.

Actually, green anoles cannot change color at will. Herpetologists (biologists who study reptiles and amphibians) tell us that the green anole’s color is dependent on its body temperature, behavior, stress and activity. For example, if you spot a green anole in a cool, shady spot it is apt to be brown, gray or olive. But in direct sunlight, green anoles are typically bright green. 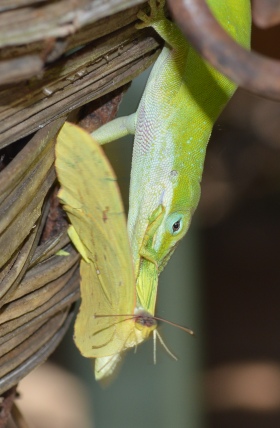 Green anoles can be spotted throughout the year in the Peach State. That’s right, during the winter, on warm, sunny days green anoles will venture out of hiding and move about. They are most active in the spring and fall.

If you want to find a green anole, look on shrubs, vines and other plants. Although they have been found in trees higher than 65 feet, they spend most of their lives no more than 10 feet above the ground.

They are well suited for climbing. Their tail, claws and special adhesive pads on their toes enable them to climb and hang on to all but the slickest surfaces.

This predator feeds on the likes of insects, spiders and other invertebrates. I once watched a green anole hunting a cloudless sulphur butterfly that was nectaring at the blossoms of a miniature butterfly bush growing in a large pot on my deck. I was watching the butterfly flitting from flower to flower when noticed the green anole hidden in the plant's foliage. As the butterfly fed, the predator remained focused on its prey. Finally, when it was within striking distance of the large butterfly the lizard lurched forward and grabbed the insect. Instantly the butterfly began flapping its wings and it appeared the anole was having difficulty holding on to its prize. After a short time, the anole lost its grip and the butterfly dropped to the deck.

In an odd twist of fate, before the hunter could descend to the deck and claim its prize, a Carolina wren flew down and grabbed the cloudless sulphur. After quickly severing the butterfly's wings, the bird ate the butterfly and flew off leaving nothing more than four bright yellow wings as mute testimony of the drama that had just taken place.

Often anoles begin hunting by the middle of the morning. However, during the heat of the summer they will often cease hunting, only to start again when temperatures begin to drop.

If you want to take on a challenge, try finding green anoles at night. Simply walk around your yard aiming the beam of a flashlight on plants. Although this lizard doesn't feed under the cloak of darkness, it will often sleep out in the open. Interestingly, when a beam of light falls on a sleeping anole its body will appear an eerie, yellowish white.

However, if you really want to learn something about the behavior of these intriguing lizards, hunt for them during the day. When you spot one that quickly disappears into the foliage, stop and walk backward a short distance and wait a few minutes. In most cases, the anole will reappear and resume what it was doing.

From time to time you may see one defending its territory or engaging in its mating ritual. Both male and female green anoles defend territories. While we can’t see these invisible territorial boundaries, the lizards know where they are. The size of these territories varies depending on the type and quality of the habitat. Some territories are only a few square feet in size, while others might span 100 feet in diameter.

Should another anole cross an unseen boundary, the anole that had staked out the area is ready and willing to defend its turf. Males will approach an interloper bobbing its head and flashing its red dewlap. If the stranger is a male and doesn’t respond to its warnings, a fight often ensues. If the strange anole is a female, the two may engage in courtship, which also involves head bobbing and the male displaying his dewlap.

After mating, females lay their eggs in shallow depressions in moist soil, rotten wood, holes in trees, or leaf litter. Less than a half-inch long, the small, white, rubbery eggs are laid one at a time every two weeks or so from spring to summer. Eggs hatch in about a month and a half. Once hatched the young, only about 1½ inches, are on their own.

The list of animals that prey on green anoles includes snakes, skinks and birds. Green anoles have only two defenses against predators. Their camouflaged bodies blend in with their surroundings making them difficult for predators to see.
In addition, green anoles sport a tail that easily snaps off. If a predator grabs an anole by the tail, it is often left with a mouthful of wiggling tail as the lizard scampers to safety. In time, the green anole will regrow the missing section of its tail.

However, we pose the greatest threat of all. Spraying the plants on which the lizards live with herbicides and pesticides often kills both adults and their prey.

The heyday of dinosaurs has long since passed. We live in a time when lizards are far less terrifying. Consequently, when I step out into my backyard, I don't have to fear that I might be devoured by Tyrannosaurus rex or another large predatory dinosaur. And that’s OK! I am content to look for lizards that are much smaller than their ancient relatives but every bit as fascinating.

Looking for the best holiday gift idea for that special outdoor enthusiast on your list?