Out My Backdoor: Let It Snow? Winter Pros and Cons for Wildlife 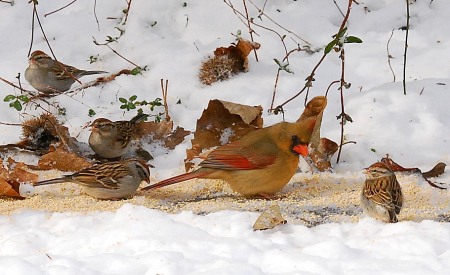 A few weeks ago when snow sifted down out of leaden skies and first covered much of the state with a stark white blanket, Georgians were filled with mixed emotions.

Countless school children viewed the snow as something magical. It heightened the possibility that school would be cancelled and that a day or two spent sliding down slopes, building snowmen and otherwise just playing in the snow loomed on the horizon.

Adults looked at the snowfall in a different light. Many simply enjoyed the Christmas card scenes that could be found everywhere.

However, not everyone was enamored with snow transforming the drab winter landscape into a winter wonderland. To them, the snow was an inconvenience that made life a little more difficult.

Then there were the thousands people working in the Atlanta area who tried to drive home so after snowflakes began to fall. To them, that first storm of 2014 created a living nightmare.

I was fortunate that I was home when the snow storm began. As such, through the windows of my sunroom I was able to watch the snow slowly filling up my backyard. While watching the scores of birds that were voraciously feeding at my bird feeders, I was reminded that snow often makes a harsh, frigid winter much more rigorous for our wildlife neighbors. In fact, for some animals, snow can often mean the difference between life and death.

As anyone who has ever made a snowman can attest, not all snow is created equal. Some is wetter. Some snow is fluffy, while other snow is hard-packed. Indeed, snow types and depth play key roles in the impact on wild animals.

Snow can actually be of benefit to some animals. For example, small rodents can venture from their burrows and feed beneath a mantle of snow with little chance of being spotted by a fox or other predator.

A lid of snow can also benefit mammals, reptiles, amphibians and insects hibernating beneath the ground. That’s because snow is a great insulator. This fact was demonstrated by a researcher on a frigid winter day several years ago. He found that the temperature of the soil beneath seven inches of snow was 24 degrees Fahrenheit, while it was minus-27 above the snow.

Snow owes its ability to insulate to the air pockets found between fallen snowflakes. It is said that snow's insulation qualities are two to three times better than loose sand.

The ruffed grouse, a game bird that lives in the mountains of North Georgia, has been known to dive into deep snow. There, it cannot be seen by predators.

However, deep snow can often increase the chances that a predator will catch prey. A deer, rabbit or squirrel bounding through deep snow simply cannot move as quickly as it can on bare ground trying to escape a fox or great horned owl.

As you might expect, what is too deep for some animals has little or no effect on others. For example, a white-tailed deer is not hindered at all walking through 6 inches of snow. However, a half foot of snow slows down a fox trying to catch its supper.

Generally speaking, the deeper the snow, the more harmful it is to wildlife. Animals moving through deep snow expend more energy than those walking through a thin layer. This necessitates the need to eat more food, or use precious fat reserves.

By the same token, animals sometimes take advantage of the snow to reach seeds, buds, berries and stems that would otherwise be beyond their reach when trying to feed on bare ground.

I thoroughly enjoy walking about after a snowfall looking for animal tracks and feather marks. It is said that snow doesn't keep secrets; indeed, it doesn't. When I made a trek around my property after the latest snowfall I found a number of tracks left in the snow by animals, many of which were out and about under the cloak of darkness after the storm passed.

Along the brushy border of my property, I found the tracks of several small mammals. All of these tracks were confined to a narrow strip adjacent to the cover of vines and briers. The animals seemed reluctant to venture too far from the safety offered by the cover.

An eastern cottontail was more adventurous. It emerged from the brushy strip and hopped its way through a small group of fruit trees before disappearing into a brush pile beyond.

The animals that are particularly hard hit by snow are often those birds and other critters that feed on seeds and insects found on the ground or in leaf litter. A snow storm that drops as little as a few inches of snow can literally cover up their food supply. This can be a serious problem, especially if the snow covers the ground for days or weeks.

If the snow is fluffy, even scattering food on top of the snow doesn't help. The scattered seed will simply sink out of sight. Knowing this, I scatter seed on a piece of scrap plywood. Ground-feeding birds such as eastern towhees, song and white-throated sparrows, mourning doves, and others were quick to take advantage of the seed made available by my inexpensive feeder.

Over the years I have also used other objects to feed birds in the snow. Among these items were plastic pot saucers, garbage can lids, pie pans, plastic garbage bags, pieces of cardboard … you name it. The item doesn’t have to be fancy; it just needs to prevent the seeds from disappearing into a white blanket of snow.

In addition, my wife provided our feathery neighbors with a veritable smorgasbord of delicacies. Our menu included jelly, suet, white millet, black oil sunflower seeds, apples, oranges, peanut butter and cornbread. When I told a friend what we were feeding the birds he quipped, "When are you going to invite my wife and I over for dinner?"

During the two days the snow remained in our yard from the first storm, these visitors seemed insatiable. In fact, they were so ravenous, we had to replace the seeds in our feeders three times a day.
As we all know, you cannot eat a meal without drinking something. With that in mind, we also kept our birdbaths full of water by pouring warm water on the ice. When the water froze, we added more water.

Remarkably, in some locations, during freezing temperatures, open water is more difficult to find than food. Studies have shown that in winter, birds will sometimes fly a mile or more to find open water.

While the snow created special challenges for our backyard birds, by providing them with an abundance of food and water, we helped them weather some difficult times. In return we enjoyed a bounty of fantastic wildlife viewing opportunities.