Out My Backdoor: Ironweed, a Native Beauty

Now that September is here, it won't be long before the Georgia countryside is ablaze with fall foliage. While it is true that this collage of reds, purples and yellows is the main act during Mother Nature's autumn extravaganza, it is preceded by an opening act that is also quite spectacular in its own right.

This is the floral show put on by our native fall wildflowers. While everyone is familiar with one of the stars of this show, the goldenrod, a number of other flowers are also stunning. One of these native beauties is the ironweed. 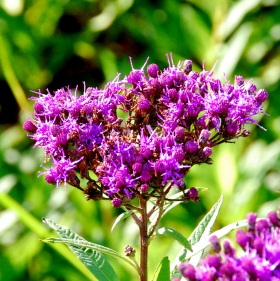 There are a number of species of ironweeds scattered across the country. One species you are apt to run across as you ramble across the state is a perennial named tall ironweed (Vernonia gigantea). Like other ironweeds, it is a tall plant, capable of reaching heights of 3 to 7 feet.

Bouquets of purple flowers adorn these lofty giants of the plant world. A single plant can bear hundreds of flowers up to an inch wide in compact heads that can measure up to 6 inches wide. As many as 30 individual blooms can be found in a single flower head. These spectacular blossoms begin appearing in mid-summer and can be spotted into the fall.

The plant's long, lance-shaped leaves also add to its attractiveness.

As you might expect, these strikingly beautiful blossoms attract hosts of butterflies. The list of these gossamer-winged beauties includes monarchs, American and painted ladies, eastern tiger swallowtails, skippers and sulfurs. Ironweed is also a great source of pollen and nectar for a bevy of other valuable native pollinators such as bee flies, cuckoo, miner and long-tonged bees, and bumblebees.

The U.S. Postal service acknowledged the value of the ironweed to native pollinators a few years ago, issuing a block of four stamps depicting four pollinators and wildflowers. One of the stamps featured a southern dogface butterfly nectaring on prairie ironweed.

Ironweed can grow in a number of different types of habitats. While the plant prefers partial sunlight and moist conditions, it can also be found in full sun to partial shade. As such, you will find it growing along streams and open woodlands, as well as in roadsides, open fields and abused lands. Additionally, this wildflower will grow in a variety of soils, except heavy clay.

Like many of our native plants, this hardy wildflower does well in home landscapes. Until recently, however, it has been a treasure more often than not overlooked by landscape designers. I am happy to say that ironweed cultivars and native plants are now on the market and finding their way into yards across the Peach State.

One of these was developed by Dr. Allan Armitage at the University of Georgia from a species of ironweed native to Arkansas. Armitage named it Iron Butterfly (Vernonia lettermannii). This is a compact variety (30-36 inches tall) that produces an abundance of purple flowers in full sun.

Ironweed doesn't require a lot of care. In fact, if you treat the plants with too much fertilizer and water, their stems become flimsy and will not stand upright.

I am sure will also appreciate the fact that ironweed is not a favored food of white-tailed deer or rabbits. In fact, these notorious garden raiders rarely take even a nibble of the ironweed's bitter foliage.

Because of their size, most ironweeds do best when planted at the rear of gardens. They do especially well in gardens where they accent the beauty of yellow flowers such as goldenrod and black-eyed Susan. They also are ideally suited as a fall border. Since some varieties can withstand the intense heat reflected off pavement, they make attractive borders for parking lots and driveways.

If you don't want the plants to reach their full height, you can prune the stems back in late spring.

After blooming, the seed heads turn a rusty brown. Some say that the reason the plant is called ironweed is that the seed heads appear to be the color of rusted iron. Others suggest that the plant gets its name from its tough stems and long taproot.

At any rate, if you want to prevent volunteers sprouting around your existing ironweed plants, it is a good idea to clip off the seed heads before the seeds fall to the ground.

Ironweed can be established in a number of ways. You can sow seeds collected from wild plants. However, germination is low and the seeds require stratification in a refrigerator for up to three months. Even then most of the seeds rarely germinate. Consequently, if you try to grow ironweed from seed, don't skimp when you plant them.

Since ironweeds grow in small stands formed by spreading rhizomes, roots can be divided and replanted elsewhere. You can also grow the plant from cuttings taken in the spring. It is much easier to simply buy ironweed plants from a reputable native plant nursery.

Since there are so many different varieties of ironweed, before you buy ironweed plants, inquire as to the plant's growth characteristics and cultivation requirements. This ensures that you will purchase the right plant for your yard. If you are looking for an attractive perennial that is easy to grow, attracts swarms of butterflies and other native pollinators, doesn't require much water or fertilizer, and isn't bothered by deer or rabbits, ironweed might be just the plant for you.

In the meantime, take a Sunday drive down some of the state's back roads, keeping your eyes peeled for a colony of ironweed. Once you find one, see if you don't agree that it is a fitting prelude to the fall foliage show, and truly a wild beauty that deserves to be a part of your home's landscape.

Looking for the best holiday gift idea for that special outdoor enthusiast on your list?