If you are like most hummingbird enthusiasts during the past few weeks, you have probably asked yourself, where are the hummingbirds?

I wish I had a good answer. However, I can tell you this: Just as the nighttime skies were illuminated with fireworks on the Fourth of July, I am equally certain that hummingbird numbers will soon explode in your backyard.

During the ruby-throated hummingbird migration in late March and April, thousands of the long-distance migrants fed at our feeders and then continued on northward to their breeding grounds. For other rubythroats, Georgia marked the end of their spring migration.

During this time of passage many of us entertained as many as a dozen or more of these birds. However, when the migration was over, most of us were left feeding only one or two hummers.

These are the birds that remained here and nested. The males divided the state into breeding territories of an acre or so in size. Within the unseen territory borders, the males tried to keep out other male hummingbirds, while at the same time attempting to woo a mate.

If your yard happened to be within such a territory, the male and his mate were probably the only hummers you saw visiting your feeders. Even then you were more likely to see a male than a female. This is because he didn't share nesting duties with his partner. As such, he had little else to do than eat and keep interlopers away. Females were rarely spotted as they spent the vast majority of their time incubating two eggs the size of black-eyed peas. During incubation they spend upward of 80 percent of their time on the nest. 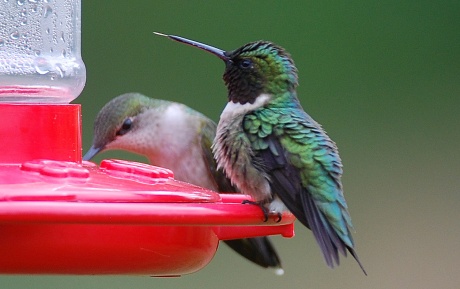 After the eggs hatched, for as long as three weeks the female fed the fast-growing hatchlings. This required the parents to visit as many as 1,500 flowers a day, gleaning the nectar and small insects needed to satisfy the voracious appetites of their young. During this arduous time, females also frequent feeders more often.

During the past several weeks, they have been joined at feeders by the one or two young that fledged. Soon after, each female laid a second clutch of eggs and began incubation all over again.

When the Fourth of July rolls around, most of our local female rubythroats are still occupied with nesting duties. But by the end of the month, the majority will have completed their nesting season. At that time, we will be hosting a pair of hummingbirds and the offspring of two nesting attempts. In short order, they will be joined by ruby-throated hummingbirds preparing for or are already migrating to their wintering grounds.

June 21 was an important day in the life of the ruby-throated hummingbird. This was the longest day of the year. Throughout summer, each day thereafter will be a little shorter than the previous one.

The declining day length triggers chemical changes within hummingbirds’ bodies. The tiny birds develop a seemingly insatiable appetite and go on a feeding binge. For the next several weeks, as they try to eat as much as they can, they will become plumper very day. The goal is to intake enough fuel, stored as fat, to make their fall migration.

Consequently, they will be visiting feeders and flowers more frequently. Our feeders are favorite places to dine because the birds can easily drink a lot of nectar without much effort.

These birds will be joined by rubythroats that have already begun their fall migration. Ruby-throated hummingbirds that breed along the northern fringes of the species' breeding range embark on their southward migration in early July. Consequently, they will join the swelling numbers of hummingbirds congregating in our backyards.

In most years, the number of hummingbirds that visit our yards will begin growing around July Fourth and peak from late August to early September. We will then see fewer and fewer rubythroats until the last migrants leave by the end of October.

If you watch closely during the next two months, you will notice that the adult males will be the first to leave. They will eventually be followed by females and young of the year.

In the meantime, pull up a seat on your deck and enjoy the show. You are about to watch hummingbirds display their aerial skills as they hover, fly backwards and dive from on high before pulling up just before crashing into the ground. In addition, squadrons of the tiny masters of the air will engage in countless dogfights as they vainly try to keep all other hummers from dining on what they perceive to be their feeders.

July’s fireworks shows might be louder and for a brief time more spectacular. However, the fact that the show staged by ruby-throated hummingbirds will last from dawn to dark and go on for weeks is nothing to sneeze at.

When that scenario plays out, by summer's end you will wonder why you were so worried a few months before about the plight of these little birds.