Out My Backdoor: The Hummingbird Vine 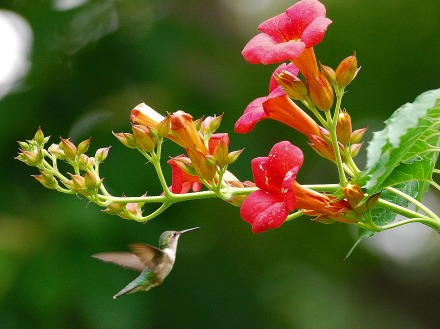 With each passing day, we are moving inexorably toward the peak of the hummingbird season. It is that special time of year when squadrons of hummingbirds invade our backyards, each vying for the opportunity to feed on nectar from our flowers and feeders.

As such, it is only natural that hummingbird enthusiasts begin searching for plants that will make their yards more inviting to these winged dynamos. A quick look at what is available at local and online nurseries reveals a number of plants that bear the name hummingbird. However, here in the Peach State there only one vine deserving of the name: the native plant called trumpet creeper.

Just so there is no confusion as to exactly which plant I am referring to, its botanical name is Campsis radicans.

It seems that ever since the first European colonists arrived in Virginia, the trumpet creeper has been plagued with an identity crisis. Colonists referred to the plant as jasmine and later as bell flower. In fact, colonists became so fond of the vine that by the early 17th century they were planting it well outside of its range around homes in New England.

Over the years, trumpet creeper has been called a number of other colorful names, including devil's shoestring, foxglove vine and cow itch vine. The name cow itch vine stems from the fact that some cows and people suffer from itching or redness when they touch the plant's leaves. Additionally, it is said that infants that drink milk from a cow that has dined on trumpet creeper will develop a rash.

This trailing plant is sometimes marketed as hummingbird vine because its showy blossoms do indeed attract hummingbirds. The ruby-throated hummingbird's affinity for trumpet creeper blossoms has long been recognized. Consequently, it is not surprising that when the famous early American artist John James Audubon depicted this species in his epic work Audubon's Birds of North America, he painted the birds swirling around trumpet creeper flowers.

This climbing, woody vine is well-known to Georgians. We see it growing on fences along noisy interstate highways and tranquil country roads alike, as well as twining its way up tall trees in open woodlands and areas once stripped of their vegetation and now being reclaimed by Mother Nature.

Trumpet creeper is hardy and not finicky about where it sets down its roots. It will grow in dry, sandy or clay soils as well as moist, rich loam. Although it grows in partial shade, it bears the most blooms when growing in full sun.

The vine's compound leaves are large (up to 15 inches) and each consists of seven or more leaflets. Its flowers are trumpet-shaped and range in color from scarlet to orange. Some cultivars bear yellow flowers. The blossoms are arranged in clusters of four to 25 or more blooms. The vine blooms from May to October.

While the plant will never make the top 10 list of valuable wildlife plants, it does have value to many inhabitants of the natural world. Birds will build their nests deep within the shade created by the vine’s green, serrated compound leaves.

Yet, although white-tailed deer will browse the vines in spring and summer, and at least one bird species, the American goldfinch, eats its seeds, few other animals dine on trumpet creeper. The bird that benefits most from this plant is the ruby-throated hummingbird. The rubythroat’s long, slender bill allows the bird to reach the sugary nectar found at the base of the funnel-shaped flowers.

Surprisingly, the orchard oriole also regularly feeds on trumpet creeper nectar. It accomplishes this fete by taking a short cut to the flowers' nectar. It makes slits in the petals near the base of the long slender blossoms. It sticks its bill through the slits and licks up the nectar that collects at the base each flower.

As for insects, native ants are commonly found traveling the highway’s created by the trumpet creeper's vines. Also, the bumblebee regularly enters the mouths of trumpet creeper blooms and takes the long walk to the sugary treasure found at the base of the blossoms.

On a couple of occasions, I have witnessed cloudless sulphur butterflies squeezing themselves as far into the blooms as possible to drink nectar. This puts the butterflies at great risk of being eaten by a predator as their wings are depressed to the point where a quick exit is impossible.

It stands to reason that this hummingbird favorite would make an ideal addition to a backyard setting. Indeed, it does well in backyards, particularly when used to create a natural arbor, trained to trail along a fence or even to create a privacy screen. I have even seen it trained to a post to create what appears to be an attractive, flowering shrub growing in the middle of an open lawn. When employed for such uses you need to provide it with strong support as the vines can become quite thick and heavy over time.

It is also very easy to grow. In fact, it has been said that well-known University of Georgia horticulturalist Michael Dirr once quipped that if you can't grow this vine, give up gardening!

Actually, the problem is not trying to grow trumpet creeper, it’s trying to control it. This is one of many native plants considered an invasive species outside its natural range, which extends across Georgia, with the plant thriving particularly in the Piedmont and Coastal Plain. If trumpet creeper is not found in your neck of the woods, I would not recommend that you plant it. The plant easily spreads via wind-blown, paper-thin brown seeds and suckers. It also is able to climb practically anything, scaling stucco, brick and siding with ease. For that reason, never plant trumpet creeper near a building.

If you do plant trumpet creeper in your yard, I suggest that you aggressively prune the vines during the winter. This will control their unbridled growth. Also, since blooms are only produced on new growth, the pruning will stimulate the plant to produce an abundance of blooms the next spring.

Therefore, if you are interested in introducing trumpet creeper into your yard, carefully weigh the plant's good and bad points. If you don't, and the vines don't stay put, you will understand why trumpet creeper is sometimes calls devil's shoestring!