Out My Backdoor: Harbingers of Spring

The first signs of spring have been seen and heard in the Peach State. They were not borne on the wings of robins or bluebirds. They were not emblazoned in the fresh vibrant colors of a crocus. They didn’t fill the still night air like the chorus of the chorus frog. Instead, the pending arrival of spring was announced from on high by birds whose ancestors winged their way over the continent some 2.5 million years ago.

The messengers were northward-bound sandhill cranes.

I seem to hear their calls when I least expect them. Such was again the case this year. I heard them on the remarkably warm afternoon of Feb. 13 as I was walking about my yard trying to shake off the effects of an illness that had kept me inside far too long. Off to the north I heard the unmistakable karoo, karoo, karoo calls of a flock of sandhill cranes flying so high in the sky I could not see them. While it is true that these garbled calls, which can be heard a mile or more away, often sound like the barking of a pack dogs, I was sure I was listening to sandhill cranes.

Immediately my spirits lifted for I knew that these harbingers of spring were telling me spring is just around the corner.

Chances are if you are not familiar with these long-legged birds when you first spot their long meandering V-shaped flocks you will mistake them for Canada geese. Since the birds fly so high it is often difficult to tell much about them other than the fact that they are really big birds.

If you have a pair of binoculars handy, once you focus on the passing flock you can immediately tell they are not geese. In comparison, sandhills possess long legs that trail well behind their tails. The legs of geese never extend beyond their tails. You might even be able to make out the crane’s long, dagger-like bills. 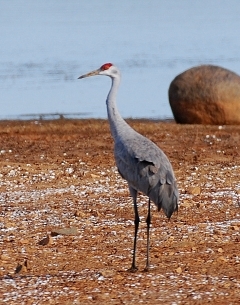 The next clue to look for is the shape of their flocks. Both sandhill cranes and Canada geese often fly in V-shaped formations. While geese typically maintain this shape, the V-shape of a crane flock seems to constantly change. The sides of the V will undulate. In addition, birds will often fall out of formation, then seemingly regain their bearings and rejoin the V-shaped flock once more.

It is always a special treat to find a flock of sandhill cranes on the ground. Only then can you appreciate their size and beauty. Standing erect, an adult male sandhill crane stands almost as tall as an average man. From wingtip to wingtip their outstretched wings measure 6½ feet. In comparison, the wingspread of the endangered whooping crane is 7½ feet. The bodies of sandhill cranes are gray and their heads are adorned with a bright red crown. Their tails are short and ostrich-like.

Sandhill cranes make brief stops in our state as they move northward. Look for them late or early in the day in large fields or open, shallow wetlands. Sometimes these visits are associated with fog or other bad weather. Occasionally, they will even make unscheduled stops on golf courses and other open areas.

Those that wing their way over Georgia are greater sandhill cranes. They are but one of nine distinct populations. They have been dubbed the eastern population. The breeding range for these cranes reaches from the icy shores of the Hudson Bay southward to Michigan and Wisconsin. Their total population numbers only 24,000 to 26,000 individuals. Practically all of these birds migrate through Georgia.

It has been suggested that sandhill cranes follow Interstate 75 to and from Florida in the same manner ducks and geese follow major rivers on migration. This theory is going to be very hard to prove.

Although most winter on the vast prairies of Florida, some wintering birds never venture farther than south Georgia. They can be found in the greatest numbers from the Okefenokee Swamp west to Grand Bay Wildlife Management Area near Valdosta, where they sometimes share roosting and feeding areas with our resident Florida sandhill cranes. However, I regularly find them during the winter as far north as the farmlands around Americus.

Sandhill cranes are very social birds. On migration, their flocks number into the hundreds. These flocks are composed of family groups and unmated birds. While migrating, they constantly communicate with one another. Interestingly, males and females often sing duets as they fly.

A major concern shared by wildlife biologists is the rapidly changing landscape along the crane’s migration pathway. Without safe, productive areas to feed and rest as they move to and from their breeding grounds, the numbers of sandhill cranes would quickly plummet.

The migration of the sandhill crane remains one of nature’s most spectacular annual events. What is truly amazing is that I don’t have to travel to some distant wilderness area to enjoy. It is something I can watch while standing in my own backyard.

Terry Johnson is a former Nongame program manager with the Wildlife Resources Division, a backyard wildlife expert, and executive director of TERN, the friends group of the Nongame Conservation Section. (Permission is required to reprint this column. Contact rick.lavender@dnr.ga.gov )