Out My Backdoor: A Great Way to Greet the New Year

When I walked outside to retrieve the newspaper on New Year's morning the sky was gray and the temperature hovered around the freezing mark. This was definitely not the weather I had hoped experience on the first day of the year. However, before my spirits had a chance to sag, I was greeted with the loud call of a Carolina wren.

As soon as I heard the bird's cheery song, I said to myself, "What a great way to start the new year!"

I am certain that I was not the only Georgian who was treated to the singing of a Carolina wren on the first day of 2015. The Carolina wren is one of a select number of birds that can be seen and heard any time throughout the year in all of Georgia's 159 counties.

Although the Carolina wren measures only a little less than 6 inches from the tip of its sharp bill to the end of its barred tail, it is one of the most recognizable birds in the state. In addition, it also holds the distinction of being the largest of the five wrens commonly seen here.

It is more reddish brown than any of the wrens that inhabit eastern North America. The bird's breast is buffy and its throat is white. On top of that, it sports a distinctive white line above its piercing dark eyes.

I have found Carolina wrens in thick rhododendron thickets blanketing the steep, verdant slopes in the Georgia mountains, flying among palmettos along the coast, in the foreboding swamps of south Georgia, in brushy fencerows bordering lush, green agricultural fields that seemingly stretch from horizon to horizon in southwest Georgia, as well as in parks and backyards located in small towns and large cities from Bainbridge to Helen. Within these far-flung locations, I most often find them living in brushy tangles and thick shrubs.

One reason that the bird is known to so many of us is that it is a common resident in our backyards. Here, regardless of whether it is spring, summer, fall or winter, whether it is hot, cold, sunny or rainy, we see and hear Carolina wrens.

Being a romantic, the call that greeted me on New Year's Day sounded much like sweet-heart, sweet-heart. However, the bird's clear, whistled notes have also been interpreted by others to sound like which jailer, which jailer or even tea-kettle, tea-kettle. 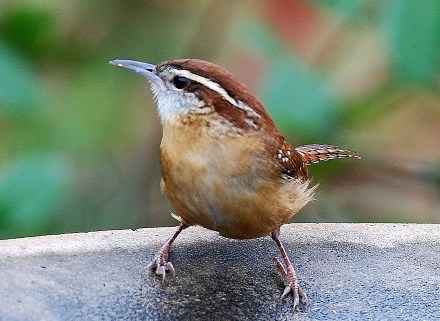 Only the males actually sing, but sing they do in a big way. One captive Carolina wren was recorded singing more than 3,000 times in a single day. While females do not sing they do make a loud chattering sound.

Unlike most of my other backyard bird neighbors, Carolina wrens mate for life and remain close partners throughout the year. The nesting season in the Peach State extends from March through July. During this five-month period, Carolina wrens may raise two to three broods. Both the male and female participate in building the nest, which is most often composed of grasses, the inner bark of trees, leaves, and feathers. Often nests also contain shed snake skins, as do the nests of some other birds like the great crested flycatcher and blue grosbeak.

Although the birds build their nests in tree cavities or construct ball-like nests composed of sticks and grass, they will also nest in bird boxes and even venture into our garages, pole barns and barns to nest in an odd variety of places. Some of the more bizarre nesting sites used by Carolina wrens include the pockets of clothing hung on a nail, mailboxes, and inside cardboard boxes, hanging flower baskets, clothespin bags, old hats, boots and buckets.

Around my home, I have found their bulky nests in my well house, beneath the metal cover of a propane tank and in an open box high on the shelf in my garage. Oddly, I have never found a Carolina wren nest in one of my many nesting boxes.

Both males and females assist in feeding their young. However, once a female begins laying a clutch of eggs in a new nest, the male takes assumes full responsibility for raising the young.

Nowadays, the bird is a favorite with most of us and other residents of the South. In fact, the residents of South Carolina thought so much of the Carolina wren they named it their state bird.

Interestingly, the Carolina wren has not always been a welcomed guest around our homes. For example, early settlers in the Ozarks looked at the bird in a far different light. Many of them firmly believed the birds were imbued with mystical powers. For example, they held the belief that it was bad luck to slay a wren. They were also convinced that the bird's peck was poisonous.

After years of speculating why folks once harbored the notion that a Carolina wren's bite was poisonous, I now believe I know the answer. A couple of years ago, a pair of Carolina wrens nested in my garage. This provided me with the opportunity to watch and photograph the birds bringing food to their hatchlings. After watching the parents bring countless critters back to satisfy the hunger of their young, I discovered that one of the most common foods poked into to the gaping mouths of the young birds was spiders.

Perhaps years ago when others noticed the bird’s fondness for spiders they thought that the birds obtained poison from the spiders. Who knows?

We now know that, in addition to spiders, the Carolina wren's diet also includes lots of other invertebrates including beetles, harvestmen, stink bugs and sowbugs, as well as berries and seeds. They will also take on much bigger game such as lizards, snakes and frogs.

The Carolina wren is truly a bird of the South. In spite of the fact that it is a homebody and does not migrate, since the mid-20th century it has repeatedly tried to expand its range northward. However, in many cases, just when a small population seemed to have taken hold, a severe winter has thwarted the expansion attempt.

Fortunately, for those of us who enjoy viewing these birds up close, Carolina wrens also visit bird feeders. It has been my experience that they prefer suet over seeds. However, I have also seen them occasionally dine on sunflower seeds. They also will eat cornbread. Others have seen them devouring peanut hearts, cracked pecans and other nuts.

Some of the more unusual foods eaten at feeders are raw hamburger, American cheese, bananas and raisins. Two of the bird's traits that have endeared it to me are its energy and unbridled curiosity. Long before the Energizer Bunny rolled across our television screens, the Carolina wren was displaying boundless energy. The bird seems to fly or hop here and there, inspecting every little nook and cranny in search of food. It doesn't stay in one location long before it is off again.

After watching a Carolina wren for any length of time it is easy to believe that it prefers to hop rather than fly. As it moves about, it seems to constantly twitch its upturned tail. Every time I watch a Carolina wren I wonder where it gets so much energy.

As I embark on the new year, I hope that I can somehow muster up a fraction of the energy and inquisitiveness that the Carolina wren exhibits on a daily basis. If I do, there is no limit to the number of New Year's resolutions I will accomplish!