Out My Backdoor: The Great Crested Flycatcher

Recently, on a cool April morning I stepped out onto my deck and was greeted with a chorus of bird songs. I heard the songs of some of the birds that are familiar year-round residents in my neighborhood –the northern cardinal, Carolina wren, chipping sparrow, northern mockingbird, pine warbler and eastern towhee. Then suddenly I heard a call that I had not heard this year. From the back of my 3-acre lot came a loud wheep. I knew immediately the great crested flycatcher was back.

I have found that this robin-sized flycatcher is more often heard than seen. This is because its loud, harsh call carries quite far. In addition, since the bird frequently calls from the very top of tall trees, it is difficult to spot. While the bird seems to call early in the morning and late in the day, throughout spring I hear it throughout the day. 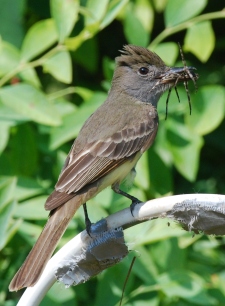 The great crested flycatcher is truly a striking bird. When you see one the first thing that catches your eye is its bright sulphur belly. Viewed through a pair of binoculars, you will also notice its rufous tail and wingtips.

The great crested flycatcher ranges across the entire state. It can be found in open woodlands, swamps, parks and along the edges of fields. Fortunately, for us and the bird itself, it is one of our native birds that will nest in close proximity to humans. I am sure this has played a significant role in its population remaining stable in spite of the continued loss of wildlife habitat.

Like eastern bluebirds, Carolina chickadees, wood ducks and many others, the great crested flycatcher builds its nests in abandoned woodpecker holes. This cavity nester has been known to nest in natural cavities ranging from 3 to 75 feet above the ground; however, most nests are built in holes 10 to 20 feet high.

I encountered my first great crested flycatcher nest some 40 years ago when I was conducting research on wood duck nesting boxes. From time to time, when I would open a nesting box and peer inside, I would find nests made by birds other than wood ducks. One type of nest was particularly odd. It was built by the great crested flycatcher. The nest was bulky and constructed of a strange variety of materials. In addition to typical nesting materials such as twigs, leaves, hair, feathers and shredded bark, interwoven into the nest were things that are best described as trash: items such as pieces of rope and plastic. However, what surprised me most were snakeskins. Yes, that’s right – snakeskins! Every nest I found contained a shed snakeskin.

Several other birds weave cast-off snakeskins into their nests. Two of the most notable in this neck of the woods are the tufted titmouse and blue grosbeak. Folks have long pondered the reason why some birds deliberately use snakes as nesting material. One of the most popular beliefs is that the skins in some way help ward off predators. However, ornithologists now believe that is not the case. They theorize that the shiny snakeskins, plastic and even onion skins simply catch the eye of birds collecting material. In truth, this intriguing mystery may never be solved.

Over the years, two pairs of great crested flycatchers used nesting structures in my yard. The first built a nest in a slot box. The long slot was obviously just wide enough to allow the large birds to slip into the box.

Last spring, a pair chose to nest in a log house erected close to my office. This provided me with an ideal opportunity to watch the comings and goings of these fascinating birds.

The log originally had a 1½- inch entrance hole. However, over the years flying squirrels had increased the size of the entrance hole dramatically. Before I could tack a metal restrictor plate over the hole to reduce its size, a pair of great crested flycatchers found the structure to their liking.

The nesting process began with the birds bringing nesting material to the box over a two-week period. Although the large flycatchers will sometimes fill a box or nesting cavity up to the bottom of an entrance hole with their bulky nest, this didn’t happen with “my” nest.

After the nest was completed the female laid five pinkish white eggs decorated with dark, brownish purple squiggles that appeared to be drawn with a felt tipped pen. She then incubated the eggs for about two weeks. During this time, you would have never known the nesting structure was being used. I knew the male was nearby because I would hear him often call throughout the day.

I was hoping to see him defend the nest from a would-be predator, but such was not the case. Male great crested flycatchers are known to vigorously defend their nest. It is reported that they will go claw to claw with a bird perceived as a threat. Such battles will even involve the flycatcher literally ripping the breast feathers out of its adversary.

Once the eggs hatched, activity around the nest increased dramatically. Throughout the day the parents spent all of their time hunting for food and bringing it to their rapidly growing young.

Great crested flycatchers hunt from a perch. Once they spot prey they fly out and attempt to grab it. As you might imagine most food items are often quite large. However, they will eat insects as small as a mosquito. In fact, they will eat everything from beetles (52 species) to butterflies, moths, katydids, grasshoppers and spiders. Even small lizards find their way into the birds’ diet. When berries are available they will feed on mulberries, pokeberries, grapes and blackberries.

It was fascinating to see what the birds would bring back to the nest. The most bazaar item I saw them carrying was one of the largest spiders I have ever seen.

This went on for about two weeks. As the young got older, they became more vocal and active. In fact, their pleading calls were so frequent and loud that I was concerned they would attract the attention of the neighbor's cat.

I was also worried that one would fall out of the nest. Often I would peer out my window and see two young flycatchers teetering at the edge of the entrance hole as they anxiously awaited their parents to return with food.

Unfortunately I wasn’t home when the youngsters fledged. It would have been interesting to see how far they flew on their first flight. Once they “flew the coop” I knew the fascinating drama I had been watching for so many weeks was over.

When I heard a great crested flycatcher call on that morning a few days ago, I was excited about the possibility that the birds would once again offer me another opportunity watch them nest. However, that may not happen. Yesterday I took a peek into the log house and was surprised to see the gaping mouths of three tiny, helpless, newly hatched Carolina chickadees nestlings waiting to be fed. Hopefully they will fledge in time for the great crested flycatchers to raise another brood. Time will tell.

In the meantime, I will have a front row seat on the comings and goings of a pair of chickadees as they raise their young.

I am convinced that more folks would have great crested flycatchers nesting in their yard if they simply made a simple modification to one or more of their bluebird boxes. The standard 1½-inch hole drilled in bluebird boxes is too small for great crested flycatchers to slip through. To give yourself a chance of attracting a nesting pair of these flycatchers, simply enlarge the hole of one of your boxes 1/4-inch. A 1-¾” entrance hole is perfect.

If you are lucky enough to attract a nesting pair, I hope you enjoy watching the birds as much as I did. Isn’t it amazing what we can see just outside our backdoor?