Out My Backdoor: Goldfinches Brighten Backyards in Summer 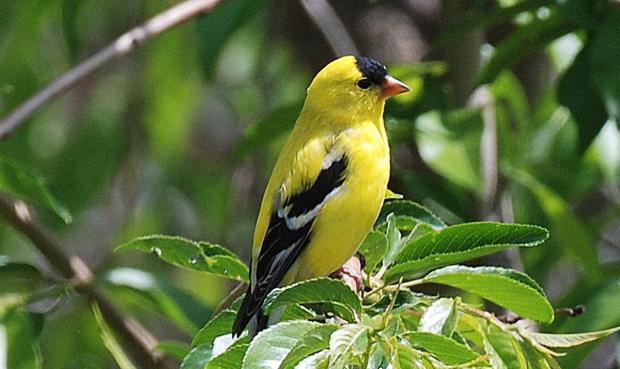 Regaled in its brilliant yellow and black breeding plumage, the male American goldfinch is a member of a select group of backyard birds that I call Wow Birds. These are birds that are so stunning when people spot them for the first time, they often exclaim, "Wow!" If you remember back to the day you glimpsed your first American goldfinch, you know why it deserves to be on this list.

Throughout the spring and summer, the male American goldfinch is the only small yellow bird that displays a black cap, wings and tail that you are likely to see in your backyard.

During the rest of the year, it looks much like the female, a bird with an olive-colored body and dusky wings decorated with two white wing bars.

The American goldfinch is known by a number of common names. Several are linked to the foods the birds eat. For example, some call it the salad bird because it sometimes dines on green leaves. Since it also consumes beet, thistle and catnip seeds, others refer to it as the catnip, thistle or beet bird. However, many more people know it as the wild canary, or simply the yellow bird.

During the winter, flocks of American goldfinches congregate around feeders throughout the Peach State. However, during the spring and summer only those of us that live from the Upper Coastal Plain northward are likely to spot them.

This attractive small finch breeds far later that most of our songbirds. Would you believe that the American goldfinch doesn't even begin nesting until late June and can continue into September?

The peak of goldfinch nesting occurs in July and August. Interestingly, this coincides with the time that native thistle flowers have matured and don their characteristic white down. The thistle is important to the American goldfinch because the birds eat the seeds and line their nest with the down.

The nest is constructed entirely by the female. It is a small (a little less than 3 inches in diameter), tightly woven cup fashioned from fine plant fibers and reinforced with spider webs and caterpillar silk. The nest is lined with the down from plants such as thistles and cattails.

This amazing structure is so tightly woven it is said to be able to hold water. In fact, young that were not protected by their parents during heavy rainstorms have actually drowned in water collected in the nest.

The American goldfinch infrequently nests in our yards, however. This is because it prefers to nest in overgrown fields close to the ground in shrubs and small trees. Some nests have actually been found in thistle plants.

After the nesting season, if you happen upon what you think might be an American goldfinch nest, look at nest's rim. If the rim is covered by a thick layer of droppings, chances are it is a goldfinch nest.

Should you take a notion to brighten up your backyard by putting out the welcome mat for American goldfinches, there are a few simple things that you can do.

One, offer the birds nyger (thistle) and sunflower seeds during spring and summer. American goldfinches favor these two seeds over anything else you can feed them.

While it is always important to keep feeders and the ground below feeders clean throughout the year, it is especially critical during the summer. Georgia's warm, humid summer weather helps provide a breeding ground for bacteria and mold that can quickly spoil food and create a health hazard for the birds drawn to your backyard cafe.

With that in mind, every couple of weeks or so it is also a good idea to remove all of the seeds and seed hulls that collect below feeders. In addition, don't forget keep your feeders clean; mold and bacteria can also build up inside feeders. Feeders should be cleaned with soap and water or a weak bleach solution. Thoroughly rinse and dry feeders before refilling them with seeds.

A complete feeding program should also include planting flowers that produce seeds relished by American goldfinches. Make mass plantings, particularly of such flowering plants. Heading up my list of some of popular plants that provide great color as well seeds for hungry goldfinches is the zinnia. Also on this list are such favorites as coreopsis, coneflower, cosmos and asters.

Throughout the summer, I dead-head most of my zinnias to encourage them to continue blooming. I allow the remaining zinnias to go to seed. Then, as summer begins to wane, I let the rest of the zinnias also develop seeds. By so doing, I provide goldfinches with a source of food throughout the summer.

If you are not already planting native milkweeds in your garden, you should consider joining the ranks of Georgia homeowners who are, part of an effort to provide much-needed host plants for the imperiled monarch. In planting milkweeds, one of the unintended beneficiaries of these efforts is the American goldfinch. When the milkweed pods split open, goldfinches are treated to a bounty of seeds, as well as fluffy down the females can use to line their nests.

Don't cut down native thistles growing in undeveloped areas on your property. As noted, American goldfinches are nicknamed thistle birds because they make full use of thistle. The down is used to line their nests and the seeds are eaten. During the nesting season, the adults even feed regurgitated thistle seeds to their nestlings.

Also, don't be too quick to mow down goldenrod and dandelions. From late summer through winter, goldfinches feed on the goldenrod's tiny seeds. They also use the plant's down in their nests.

I hope you do not spend your entire summer without seeing American goldfinches. If you try some of the suggestions offered here, your chances of seeing one or more these gorgeous birds should improve. If you do spot one, you might find yourself saying, "Wow!"