Out My Backdoor: Don't Eat My Spring Flowers!

Spring is one of the most beautiful times of the year. To many, the reason they love spring above all other seasons is that this is when Mother Nature pulls out all the stops and stages the year’s most spectacular floral show. Woodlands, yards, fields and roadsides all become integral parts of a floral tapestry that stretches across the entire state.

Consequently, we don’t like it when something happens that hastens the demise of the beautiful blossoms that bring us so much joy. When a late cold frost, heavy winds or pelting rains cause spring flowers to fall prematurely, we grumble and rue the fact that we will have to wait until next year to once again revel in the beauty of spring.

However, when some folks look out their window and see birds munching on buds or flowers it’s Katy, bar the door! To their way of thinking, although they can’t do anything about the weather, they can try keep pesky birds from eating the buds and flowers of their favorite plants. 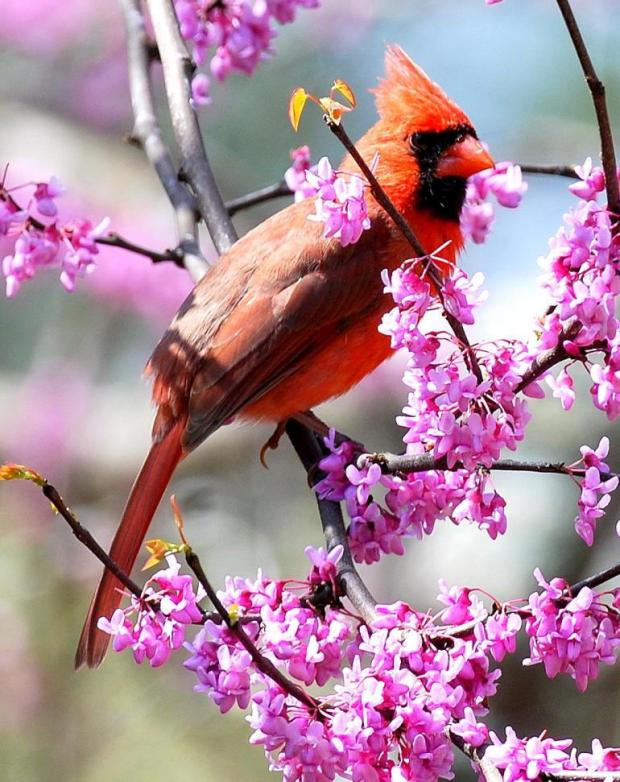 If have never seen birds eating buds and blossoms, it might come as a surprise to you that indeed some birds regularly eat them. This was the case with a fellow that called me a few years ago.   He was upset because birds were eating apple blossoms in his backyard. According to the homeowner, for as long as he could remember, when his apple tree finished blooming the ground beneath the tree was littered with spent petals.

Not this year. It seems that a flock of hungry cedar waxwings had tried to devour every last bloom on the tree. As a result, he could not find any petals on the ground beneath his prized apple tree. This meant that he wouldn’t be enjoying any apples later in the year.

The cedar waxwing is one of the few birds that eats buds, flowers and young leaves. Cedar waxwings seem to eat blossoms most often during their spring migration back to their breeding grounds. In fact, spring-blooming plants are more apt to be eaten by birds than flowers that bloom later in the year.

In addition to the cedar waxwing, the list of birds that share the strange habit of eating flowers includes the northern cardinal, house and purple finches, northern mockingbirds, blue jays, evening grosbeaks, and American goldfinches, to name but a few.

Even quail will dine on flowers. They are particularly fond of yellow jasmine blooms. In a study conducted by the legendary quail biologist Herb Stoddard, yellow jasmine blossoms made up 25 percent of the food consumed by seven of the 19 quail he studied.

Nurserymen in the Northeast have reported that house finches often damage their forsythia plants by eating emerging buds.

One morning a couple of years ago, I was wondering where the goldfinches that had been feeding in my backyard on sunflower and nyger seed had gone. Later that day I found them eating the flowers festooning a red maple growing in my front yard.

While people sometimes get irate when they see a bird dining on buds and blossoms, in truth, the birds rarely cause severe damage to the plants. In fact, in some situations this natural pruning of excess blossoms actually aides the plant. Purple finches, for example, have been credited with helping fruit trees produce larger fruit.

On the other side of the coin, birds are often persecuted for dining on buds and flowers. Arguably the most notorious bud-eating bird is the ruffed grouse. The range of this game bird extends southward into extreme north Georgia. In the 1870s, several towns in Massachusetts paid a 25-cent bounty on ruffed grouse. These bounties were established because apple farmers believed the grouse’s habit of eating buds reduced their fruit crops. As late as 1922, New Hampshire paid farmers $70,000 for alleged grouse damage to fruit trees.

Why do birds eat buds and flowers? The answer is simple – They are nutritious. In fact, some experts claim that flowers have more food value than buds. As such, birds that eat these attractive foods have an advantage over birds that don’t. Look at it this way, since food is often extremely scarce in late winter and early spring, birds that consume buds and flowers have a more abundant source of food than those that are having a very hard time finding anything to eat.

With that in mind, should you spot birds eating flowers and buds in your yard this spring, I hope you won’t mind sacrificing some blossoms to birds whose beauty adds so much to the colorful spring show being staged just outside your backdoor.

Terry Johnson is a former Nongame program manager with the Wildlife Resources Division, a backyard wildlife expert, and executive director of TERN, the friends group for Wildlife Resources' Nongame Conservation Section. His column is a regular Georgia Wild feature.