Out My Backdoor: In Defense of Dandelions 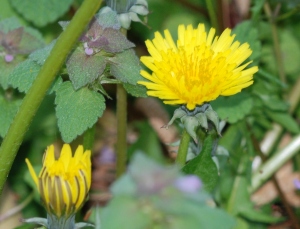 One of the most interesting plants that grows in Georgia backyards is often either overlooked or scorned.

This plant doesn’t need an introduction; it is known by most of us. We know it as the dandelion. It is hard to believe that a plant that has fed and healed mankind for thousands of years is now considered by most Americans to be nothing more than a lowly weed; a weed so terrible that, in the minds of many, it should be eliminated at all costs. Indeed, time has not been kind to the dandelion.

The story of the dandelion begins thousands of miles away from Georgia. Botanists aren’t sure, but they believe the dandelion is native to Europe or the Mediterranean. What we do know is that the dandelion is a vagabond that has made its way to the far corners of the world.

Its journey has been abetted by humans. With our help, the dandelion made its way to the British Isles, north to Scandinavia and east to the Orient. Vikings carried it in their longboats to Greenland. Puritans brought it along with them to the New World and planted it in their herb gardens. French, Dutch and German colonists did likewise. When the first settlers moved westward they, too, transported the plant with them all the way to the Pacific Coast.

When the first shots of the Civil War were fired, dandelions were already growing in the Deep South. Today, the dandelion occurs across the entire lower 48 states northward to Canada and in much of Alaska. You are probably scratching your head and asking yourself, “Why did so many people go to so much trouble to bring the dandelion with them wherever they traveled?” The answer is really quite simple. To our forefathers, the dandelion was a valuable source of medicine and food, and could even be used to make wine and beer.

Dandelion greens have long been a relished food. They were eaten by the ancient Greeks and Romans. Throughout Europe, dandelion leaves have long been eaten. The dark green leaves and sliced roots are often served on buttered white bread. Dandelion flowers are dipped in batter and fried to make a tasty dessert. During the War Between the States, Confederate soldiers used dried dandelion roots as a substitute for coffee. For thousands of years dandelions have been eaten because they are delicious. Nutritionists now tell us the plant is also a great source of iron, calcium, magnesium, potassium and carotenoids, as well as vitamins A, B, C and D. In fact, the dandelion contains 25 times more vitamin A than tomato juice.

For centuries the dandelion also has been considered a natural medicine chest. It earned this reputation because it was commonly used to help relieve arthritis and as a laxative. The plant’s milky sap has been employed to remove pimples and warts. Other medicinal uses of the plant include improving appetite, and treating heart and liver diseases, gallstones and jaundice. If that isn’t enough, dandelions were once thought to be able to ward off witches.

It is believed this hardy plant is named dandelion because the jagged edges of its leaves look like the teeth of a lion. In China, it is called Nail in the Earth. Over the centuries, it has also gone by a number of other colorful names such as Irish Daisy, Peasant’s Cloak and Devil’s Milk Plant.

A perennial, dandelions have a long taproot and leaves that rest on or close to the ground. This hinders other plants from growing nearby. Its bright yellow flowers are displayed on hollow stems. On bright, sunny days, dandelion blossoms open by 8 a.m. and begin closing by 1 p.m. Flowers often remain closed during rainy or cloudy weather.

Without a doubt, the plant’s most intriguing feature is its bright yellow flower. Yet what we call a flower is actually not a single flower at all. It is composed of 50 or more individual blooms. When the plant’s seeds mature, they are equipped with delicate parachutes. When dislodged by the wind or an animal, these parachute-equipped seeds can drift for long distances. This allows dandelions to colonize sites far from the parent plant.

If you take the time to really look at a dandelion flower, I’m certain you will find it quite attractive. The Japanese are so enamored with the plant that members of the Japanese Dandelion Society have developed more than 200 varieties. The flowers of some of their hybrids range from white to black to copper.

Dandelions are great wildlife plants. Their seeds and foliage are eaten by at least 33 species of wildlife. Chipping, field, house, song and white-throated sparrows, American goldfinches, and indigo buntings are but a few of the many songbirds that devour dandelion seeds. Dandelions also show up in the diets of bobwhite quail, wild turkeys, ruffed grouse, rabbits, white-tailed deer and eastern chipmunks.

I have been fortunate enough to watch chipping sparrows eat dandelion seeds. The birds snip off the frilly parachutes before devouring the seeds themselves.

Some 93 species of insects collect nectar from dandelion flowers. These nectar feeders include bees, and butterflies such as sulphurs, cabbage whites, admirals and commas. Birds such as the ruby-throated hummingbird weave dandelion seeds into their tiny nests.

For centuries, children have used dandelions as toys. One such toy is a horn that can be fashioned by making a quarter-inch slit in a dandelion stem. Sound is created by blowing through the opposite end of the stem. Different sounds can be made by varying the lengths of the stems.

Dandelion necklaces and bracelets can be fashioned by tying together series of the flowers. Dandelion jump ropes can be created the same way.

Dandelions have long been used in children’s games. Who hasn’t competed in a dandelion seed race? Two or more contestants blow seeds of a dandelion seed head to see whose seed travels the greatest distance. Some say you can tell the time by blowing seeds off a dandelion seed head. Supposedly you blow once on a seed head and the number of seeds left corresponds to the time of day. (I have often wondered what it means when no seeds are left.)

During the 1800s, youngsters sometimes would blow on dandelion seed heads to tell when it was time to stop playing and head home. So the story goes, if no seeds were left on the seed head after blowing on it three times, they could continue playing. If any seeds remained, they knew it was time to hit the road toward the house.

I believe that the ability of dandelion seeds to easily spread is the main reason it has fallen into disfavor throughout the country. If the dandelion had stayed put in Puritan herb gardens and around settlers’ homesteads, I’m certain this truly lovely, valuable plant would be scorned today by so many. In a time when society prizes vast expanses of green lawns devoid of any plant but grass, there is no place for the dandelion. Consequently, each year homeowners spend millions of dollars and untold hours trying to eradicate the plant with powerful herbicides and backbreaking labor.

This is a war with no end in sight. In the meantime, the next time you see a dandelion, I hope you will realize that it has a lot of redeeming values and doesn’t deserve its bad reputation.

Terry W. Johnson is a former Nongame program manager with the Wildlife Resources Division, a backyard wildlife expert, and executive director of TERN, the friends group of the Nongame Conservation Section. (Permission is required to reprint this column. Contact rick.lavender@dnr.state.ga.us.) Learn more about TERN, The Environmental Resources Network, at http://tern.homestead.com.