Out My Backdoor: Counting Hummingbirds Is No Easy Task

August is indeed a special month. For the state’s students, it marks the end of summer vacation and the return to the classroom. For Georgia sportswomen and men, the 2010-2011 hunting season is ushered in with the opening of squirrel season. And for the backyard naturalist, August is truly the month of the hummingbird.

Indeed, more hummingbirds visit Georgia backyards this month than at any other time of the year. During the hot, sultry days of August, it is not uncommon for some homeowners to host 100 or more hummingbirds a single day.

Whenever you have the pleasure of watching so many hummingbirds at one time, it is only human nature to wonder how many of the tiny birds you are actually looking at. However, if you have ever tried to count them, you quickly discover that it is no easy task. It almost seems like trying to count the stars in the sky. 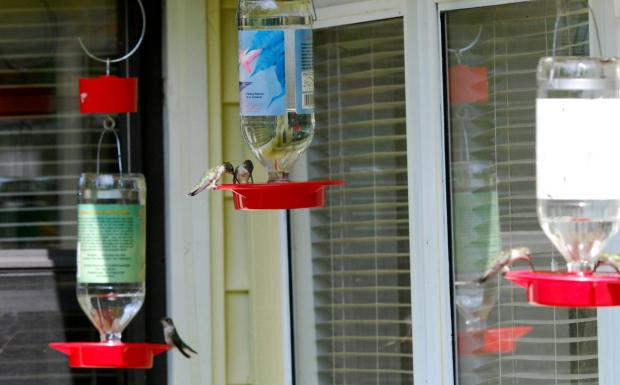 Well, I am here to tell you that trying to estimate the number of hummingbirds is a problem that has perplexed wildlife watchers and biologists for years. Although nobody has been able to devise a foolproof census technique, a couple of methods have been developed that offer fairly reliable estimates.

About a decade-and-a-half ago, an Arizona hummingbird enthusiast named Stephen Russell came up with a novel way to estimate hummingbird numbers based on how much food they consume. It stands to reason that the more hummingbirds you have visiting your feeders the more food they eat, right?

Yes, that’s true but there are so many variables that can affect food consumption, such as weather, size of the bird and food availability, you have to wonder how accurate population estimates are that try to deal with so many variables. Russell attempted to account for as many of these variables as possible. He began by weighing a gallon of nectar mixed at a ratio of one part sugar to four parts water (144 ounces). He then estimated the weight of the hummingbirds visiting his feeders. He also determined that his hummingbird feeders provided the hummingbirds visiting his backyard with 70 percent of their energy needs. He even went so far as to calculate that 14 percent of the nectar poured into his feeders was lost to evaporation, sloshing out in the wind and being consumed by ants, bees, yellow jackets, you name it.

He plugged all of this information into a formula and came up with the estimate that a gallon of nectar mixed at the ratio of one part sugar to four parts water would feed 750 hummingbirds a day. To put it another way, a quart of this sugar water solution fed some 187.5 birds a day.

Russell also determined that if hummingbirds rely totally on feeders, a gallon of the sugar nectar will feed only 549 birds. By the same token, a quart of this solution in this situation will feed 137.25 birds.

During his study, Russell found that during one hot August day when hummingbird numbers were at their peak, 8,980 hummingbirds fed in his backyard study area. He went on to estimate that during August (the month when hummingbirds were most abundant in his neck of the woods), 170,550 hummers dined at his feeders. Wow, and you thought you had some hummingbirds!

Anyway, if you know how much food you have placed in your feeders in the morning and compare what is left by the end of the day you can use Mr. Russell’s figures to estimate how many hummingbirds you host on a given day.

If this method requires more time and effort, there are other ways to attack the problem. One such approach was shared with me by a hummingbird fancier several years ago. He told me that he counts the number of hummingbirds using his feeders by using his eyes like the shutter on a camera. He waits until hummingbirds are hovering all about his feeders. He then closes his eyes and counts the hummingbirds in the image portrayed in his memory.

I have tried this technique and it simply won’t work for me. Perhaps the hard drive in my head isn’t large enough to handle a file that large. Who knows?

The technique that I recommend is also endorsed by the “First Lady of Hummingbirds,” Nancy Newfield. This Louisiana researcher and author has studied hummingbirds for more than 30 years. Her method is based on hummingbird banding studies. These studies compared the number of banded birds to unbanded birds caught in a backyard during the peak of the hummingbird season.

Keep in mind this technique only works during the summer when hummingbirds are most plentiful. That means if you live in the Peach State, it will work right now. You simply wait until you think that you are looking at the maximum number of hummingbirds using your feeders at one time. Quickly tally the birds you see and multiply this number by six. This will provide you an estimate as to how many different hummingbirds you are feeding during a single day.

For example, if you count 30 birds, you are actually feeding approximately 180 hungry hummers.

You might even calculate your backyard hummingbird numbers using both techniques. It would be interesting to know how they compare.

At any rate, regardless of how many hummingbirds are visiting your backyard feeders this August, enjoy them while you can. Come September, their numbers will rapidly dwindle and leave you waiting for next August and a new explosion of hummingbirds.

Terry Johnson is a former Nongame program manager with the Wildlife Resources Division, a backyard wildlife expert, and executive director of TERN. His column is a regular Georgia Wild feature.