Out My Backdoor: The Christmas Hummingbird?

There are a number of birds that we associate with Christmas. Some such as the robin, dove and goldfinch owe their association to this holiday because legend tells us they were present at the birth of Christ. Others are linked with Christmas because they are commonly depicted on Christmas cards. Over the years I have received Christmas cards featuring birds such as ducks, geese, blue jays, quail, chickadees and, of course, the all-time favorite – the cardinal. 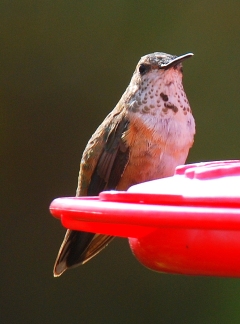 Now before you think that I have consumed too much eggnog and lost my senses, let me explain why I my suggestion may not be as bizarre as it seems.

Everyone is familiar with the ruby-throated hummingbird. It is the only hummingbird known to nest east of the Mississippi River. It is the hummingbird that patrols our backyards throughout the spring and summer. The vast majority of these tiny dynamos leave the state by the end of October.

However, would you believe that the rubythroat is but one of 12 species of hummingbirds that have been reported in the Peach State? It’s true.

If you are lucky enough to spot a hummingbird at your feeder anytime from November through February, it is probably a rufous. By far, it is the hummingbird most commonly seen in Georgia throughout the winter. In some years, anywhere from 75 to 100 rufous hummingbirds are reported across the state.

Such was not always the case. The first confirmed record of a rufous hummingbird in Georgia was documented in Athens on Aug. 6, 1978. In fact, when the Nongame Conservation Section began its Hummingbird Helper Program in 1989, the ruby-throated and rufous were the only hummingbirds listed on the Georgia Ornithological Society’s list of Georgia Birds. At that time typically no more than half-a-dozen rufous hummingbirds were reported annually.

The number of rufous and other hummingbird species quickly swelled when the Nongame Conservation Section and others urged people to leave at least one hummingbird feeder up throughout the winter, and to report any hummingbird sightings to the Wildlife Resources Division, the parent division for the Nongame Conservation Section. This list now includes the black-chinned, broad-billed, broad-tailed, Allen’s, Anna’s, magnificent, green-breasted mango, buff-bellied, calliope, green-violet eared, and rufous.

Most of these birds are only seen in Georgia during the winter. However, rufous hummingbirds may have been wintering in Georgia much longer than we realized. Let me explain.

The saga of the Christmas hummingbird has its roots in the rich farmland of southwest Georgia near the small community of Bluffton. The tale was told to me by Ikey Gregory, a retired teacher and hummingbird enthusiast. Over the years, she and her husband Flinn have probably seen more wintering hummingbirds in their yard in Early County than anybody else in the state. At last count they had spotted more than two dozen wintering hummingbirds.

Ikey’s love for hummingbirds led her to give many talks about hummingbirds to garden and women’s clubs. At various times over the years, three ladies told her they saw winter hummingbirds in the early
1900s. The women, all in their upper 80s or 90s when they related their stories to Ikey, grew up on farms in Bleckley and Early counties. Each vividly remembers when they were young girls, one of the winter chores they shared with their fathers and brothers was going into the fields to pick the last of the cotton and peanuts.

At such times they always looked for brown hummingbirds that lived in the fencerows that bordered the fields. Since the hummers were most often seen around Christmas, they named these tiny birds Christmas hummingbirds.

Since the rufous displays more rusty brown plumage than any other hummingbird, more than likely the birds they saw were rufous hummingbirds. The fencerows described by the ladies have long been recognized as havens for quail, rabbits, songbirds and other wildlife. In fact, most farmers of that era considered these areas not as wastelands, but places that yielded a valuable crop of game for the table.

Sometime in the past, though, it was decided that the need to produce more cotton, peanuts and other crops outweighed the wildlife benefits of brushy fencerows. Today, most of these productive strips of wildlife habitat that once crisscrossed rich farmlands have been bulldozed to make way for larger tractors and implements and pivot irrigation.

Most of the animals that depended on these valuable habitats have dwindled in number. Rufous hummingbirds that may have been wintering there for generations may have been a little more fortunate. Today, feeders hung in backyards in small towns like Bluffton and large cities like Atlanta are providing these hardy Western birds with a supplement to their diet of sap, insects and the nectar produced by winter-blooming flowers.

As a biologist, I realize that, since nobody seems to have documented the presence of these tiny brown birds decades ago, it is impossible to positively say the birds seen by these ladies so long ago were rufous hummingbirds. However, I can’t help but believe that’s what they were.