Out My Backdoor: For This Butterfly, Beauty Is Fragile and Short-lived 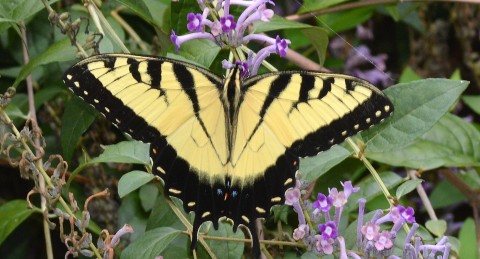 In the natural world, beauty is often as fragile as it is short-lived. Such is the case with the eastern swallowtail butterfly. This large, gossamer-winged insect is so gorgeous it captures our undivided attention whenever we see it. By the same token, the stunning adult swallowtails that flit about our yards have a life span that is measured only in days.

Eastern tiger swallowtails have two color phases. The wings of the males are predominantly yellow and are marked with vertical black stripes. This is the color form most people recognize. Females, on the other hand, come in either yellow or black phases. If you look closely at the wings of the dark female, you will usually see telltale black stripes.

In middle Georgia, my neck of the woods, more than 90 percent of all female eastern tiger swallowtails are black. However, dark females are far less common in some other parts of the country. Some lepidopterists – folks that study butterflies – suggest that the percentage of dark females is greatest where pipevine swallowtails are most abundant. For example, black females are far less common in New England and other parts of the butterfly's range.

Dark females have a better chance of surviving long enough to lay eggs than yellow females. The reason why is that dark females look much like the poisonous pipevine swallowtail. The pipevine swallowtail has an extremely bitter taste. If a bird or other predator tries to eat one, it rarely goes back for seconds or even any butterfly that looks like it.

A female tiger swallowtail lays up to 250 eggs during its short lifetime. It does not lay eggs on just any plant. To the contrary, tiger swallowtails delicately deposit their eggs only on tulip poplars (commonly called tulip trees), wild cherries, sweet-bay, basswood, ash and wafer ash, especially when these trees are near nectar sources. A female doesn’t lay all of her eggs on a single plant. Typically she will lay a few on a number of trees scattered over a wide area.

The caterpillars hatch in 10-14 days. These tiny, defenseless insects are protected from being quickly gobbled up by hungry predators in some very interesting ways. When they hatch, they look remarkably like unappetizing bird droppings.

As the caterpillars grow, they become fat and green and would be easy pickings for birds and other predators if it wasn't for the fact that they are equipped with a pair of markings that look much like large eyes. These black and yellow eyespots give the caterpillars a menacing appearance. In addition, since the false eyes are some distance from the head. If a bird picks at the eyespots, the blow has less chance of being lethal compared to the bird attacking the caterpillar's head.

Also, if a bird does strike a caterpillar, two orange horn-like structures called osmeteria suddenly appear and emit a foul-smelling chemical. When disturbed the caterpillar will even raise its false head and move it in a cobra-like manner. This is often enough to discourage all but the most persistent predators.

The eastern tiger swallowtail lives as a caterpillar for three to four weeks. During this time it voraciously dines on the leaves of its host plant. Once the caterpillar reaches full size it stops eating and encases itself in a hard outer shell called a chrysalis. When the insect emerges 10-20 days later, it is an adult.
Adult eastern tiger swallowtails fly about our yards for only six to 14 days. During this brief time they must feed and produce a new generation of swallowtails. Male swallowtails seek out females, which are attracted with perfume-like chemicals called pheromones.

Both male and female eastern tiger swallowtails feed on nectar produced by a number of plants. They are particularly fond of the nectar offered by butterfly bush, lantana, phlox, milkweed, dandelion, honeysuckle, abelia, bee balm, Joe-Pye weed and wild cherry.

Eastern tiger swallowtails can be found in cities, suburban neighborhoods and rural habitats alike. They are commonly spotted flying in open areas such as parks, yards and orchards.

Since they are cold-bloomed animals, eastern tiger swallowtails rely on the sun to warm their bodies. A swallowtail cannot fly until its body temperature reaches 75 degrees Fahrenheit. In fact, they cannot fly for any length of time until it warms to 82 degrees. This is why swallowtails and other butterflies are often seen warming their bodies in sunny spots with their wings outstretched, a behavior called basking.

One thing I have noticed in my yard is that when temperatures are high, eastern tiger swallowtails will feed long after other butterflies have retired for the day. Seeing a swallowtail nectaring at a butterfly bush or lantana in the twilight is a special treat.

If you closely watch the eastern tiger swallowtails in your yard, you will notice that males will often patrol certain areas such as flower beds. They will vigorously defend these domains from the intrusions of other males and chase after any females that happen by. In rural settings, males will often fly to the tops of hills and flit back and forth, looking for females.

Although adult eastern tiger swallowtails fly about for such as short period of time, multiple generations – called flights – ensure that, depending on where you live in the Peach State, you can enjoy the sight of these fragile, short-lived beauties from March into early November. That is great news for those of us who feel that these flying flowers make our backyards more attractive.

Is it any wonder that, at the urging of the Garden Club of Georgia, the Georgia Legislature named the eastern tiger swallowtail the Georgia state butterfly?