Out My Backdoor: The Bird That Doesn't Build a Nest 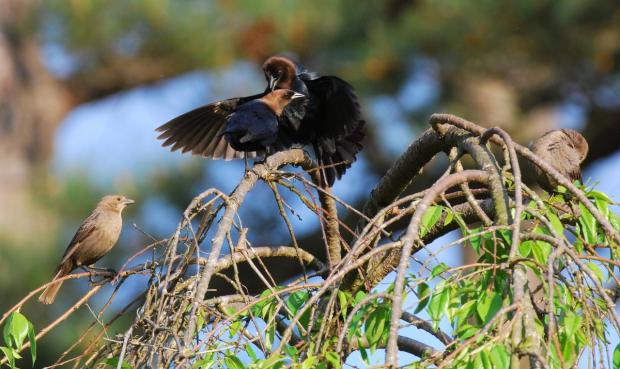 The brown-headed cowbird is a common resident throughout Georgia. Although it is not one of the most striking birds that visits our yards, it undoubtedly exhibits the most bizarre breeding behavior of any of our backyard bird neighbors. The reason for this is that it is a brood parasite, as such; it does not build a nest or raise its own young.

Around my middle Georgia home, the brown-headed cowbird is most abundant in spring. I have long considered the arrival of the first brown-headed cowbirds in March as a sure sign that spring is close at hand. The bird's musical, liquid call is uniquely beautiful. I associate the sound with a loosening of winter's harsh grip on the land.

While, on one hand, I look forward to the appearance of this harbinger of spring, it does not take long for flocks of cowbirds to wear out their welcome. Brown-headed cowbirds are voracious eaters. They particularly like white millet. Consequently, trying to keep my feeders stocked with enough millet for chipping sparrows, cardinals and other birds that dine on the round, golden-brown seeds can be both expensive and time consuming.

By early April, the male brown-headed cowbirds living in my partially wooded yard are engaged in elaborate displays involving lifting their heads skyward, fluffing their feathers and spreading both their wings and tails. All the while, the males are trying to outperform each other, one of more females docilely is watching from nearby perches.

Shortly thereafter, the flocks disperse and I do not see more than a few cowbirds at a time competing for food with other backyard residents. This is a sure sign that female brown-headed cowbirds are playing out a drama rarely seen by humans.

It begins with female cowbirds perching atop trees, fence posts and the like, constantly looking for other birds carrying nesting material to their hidden nest sites. At other times, the cowbirds walk along the ground or hop from branch to branch within shrubs intently searching for nests. Some observers have reported seeing cowbirds flying into shrubs or small trees, while vigorously slapping their wings and uttering loud calls. It is believed this erratic behavior is designed to flush birds from their nests.

Amazingly, during the nesting season, a female cowbird may lay 40 eggs. However, she rarely lays more than one egg in a nest.

Female cowbirds usually lay their eggs in a host's nest during the early morning. As a rule, the day before laying an egg the female cowbird will remove one of the host's eggs. Females are so adept at not trying to bring attention to their own egg, she rarely lays the first egg in a nest: Doing so might increase the chances the egg is tossed out or the nest abandoned.

Remarkably, cowbird eggs usually hatch a day earlier than the eggs of the host bird. This, combined with the fact that cowbird young usually grow much more rapidly than host nestlings, give young cowbirds a better chance of survival. Contrary to popular belief, young cowbirds do not force their nest mates out of the nest.

On the average, only 3 percent of the young will successfully leave the nest. While this may not sound like much, the truth of the matter is, at this rate, a cowbird population can double itself every eight years.

On the other side of the coin, in areas where cowbird numbers are high, populations of the birds whose nests are parasitized by brown-headed cowbirds can plummet. Consequently, wildlife biologists believe that cowbirds are playing a key role in the decline of many migratory birds.

Believe it or not, brown-headed cowbird eggs have been discovered in the nests of 220 species of birds. In addition, young cowbirds are known to have fledged from the nests of 144 of these species. One such species is the red-eyed vireo. Biologists have found as many as 40-50 percent of red-eyed vireo nests contain cowbird eggs. When this occurs, more than half the vireo nests produce fewer young than nests that are not parasitized by cowbirds.

It is encouraging to note that some birds do a pretty good job of rejecting cowbird eggs. Among the small number of birds most adept at this are gray catbirds, blue jays, American robins and brown thrashers. These birds will remove cowbird eggs or simply abandon their nests when a cowbird egg appears. Eastern phoebes and yellow warblers will even build new nests atop old nests that contain cowbird eggs.

Sadly, most other birds will accept cowbird eggs even though the brown-spotted eggs are quite different from their own.

At times when I am enjoying a spring day in my backyard, seeing a cowbird at a feeder will prompt me to realize that at that moment female cowbirds are acting as protagonists in a compelling natural drama staged in my backyard and countless other locations across the state. It is sobering to realize I will probably never witness this fascinating behavior. However, once I hear the melodious call of a wood thrush, the rapid notes sung by an orchard oriole or the odd choppy phases uttered by the gray catbird, I am quickly more than satisfied listening to the beautiful sounds and sights that surround me.