Out My Backdoor: Baltimore Orioles in Winter? 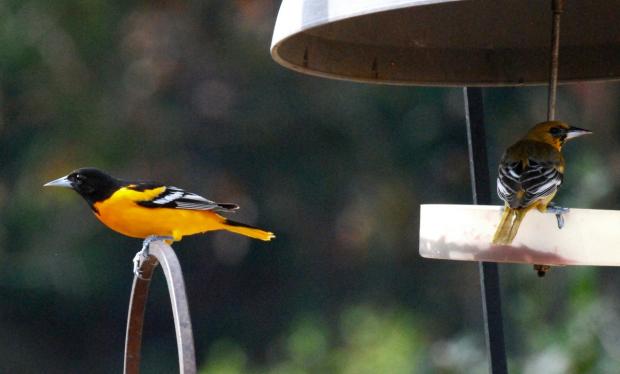 If you would like to host a Baltimore oriole in your backyard, unbelievably there is no better time to try doing so than right now.

Our chances of spotting a Baltimore oriole are limited because the bird rarely nests here. There are scant records of the bird nesting in Georgia. This was dramatically illustrated by the fact that only a handful of nesting attempts were documented during the Georgia Breeding Bird Atlas Project.

Consequently, most people assume their only legitimate chance of seeing this colorful bird in their yard is when it is passing through Georgia on its spring and fall migration. During these epic journeys, Baltimore orioles will sometimes drop in to drink, bathe and feed.

The male has a black head, neck, and back. Its black wings are marked with white wing bars. Most of the rest of the bird's plumage is bright orange.

The combination of black and orange feathers is so striking that, when you see one, you might be convinced that you are looking at a bird that makes its home in the tropics.

Although female Baltimore orioles are somber versions of their brightly colored mates, they possess a subtle beauty.

For untold thousands of years, Baltimore orioles have traditionally wintered far south of the U.S. in southern Mexico southward to Columbia. Consequently, they were rarely, if ever, seen in North America in winter.

However, as long ago as the 1890s, a smattering of Baltimore orioles began showing up at bird feeders during the winter. Thereafter, from time to time, one would be spotted in the northern U.S. Then, for reasons we do not fully understand, by 1950 these gorgeous birds were regularly appearing in small numbers across New England.

In the years since, sightings have come in from feeder watchers as far south as the Carolinas and Georgia. Now Baltimore orioles are regular winter visitors throughout much of eastern North America.

I have seen a number of wintering Baltimore orioles. My first sighting took place in my backyard more than two decades ago. When an immature Baltimore oriole showed up one winter day, I was taken aback. Hoping the bird would linger close to my home, I scurried about trying to find out what I might feed the bird. I learned that one of the best foods you can offer a wintering oriole is grape jelly.

Armed with this valuable tip, my wife and I put grape jelly in a small plastic container similar to those used by restaurants to serve salad dressing. Much to our delight the bird immediately took to our sweet food offering so well it spent the rest of the winter dining on the unusual food.

A few years ago, when I went to a home of a couple of avid bird watchers in Warner Robins to band a wintering rufous hummingbird, I was surprised to discover they fed upwards of more than two dozen Baltimore orioles each winter. I believe them since during my visit I counted at least 19 orioles. What attracted them to this suburban yard? You guessed it: grape jelly. In fact, the couple told me that the birds preferred Welch's grape jelly to cheaper brands.

On another occasion, while trying to spot a rare broad-billed hummingbird in a Macon neighborhood, I saw at least two Baltimore orioles perched in the leafless trees growing near the yard used by the hummingbird. I have also seen wintering orioles in Thomasville in deep south Georgia. These birds were attracted to small donuts dipped in powdered sugar. These tasty morsels were offered to the birds in wire suet baskets.

If you want to try to add a touch of spring to your backyard this winter and to attract a Baltimore oriole, put out a container of grape jelly, powdered donuts or halved oranges. Although, it is a long shot that you will be successful, if you succeed, you will not believe how much an adult male will brighten up your otherwise drab backyard.

Since we have no idea how many Baltimore orioles winter in Georgia, if you are lucky enough to attract one or more of these birds, please let me know. You can email me at tjwoodduck@bellsouth.net.