Out My Backdoor: Backyard Wildlife Feeling the Heat, Too

Has it been hot enough for you? It has been for me. For days on end, in my neck of the woods daily temperatures have soared into the mid to high 90s and heat indexes routinely topped the 100-degree mark.

When it is this hot most of us spend the majority of the day in air-conditioned comfort. Whenever I am inside cooling off, I feel guilty when I think about my wildlife neighbors. They can’t escape to an air-conditioned hideaway when the temperature sky-rockets.

I really should not feel that way, however, because although they are indeed stressed by torrid temperatures, animals have a variety of fascinating ways to survive the furnace-like heat.

As soon as temperatures begin to rise, one of the first things we do is exchange heavy garments for clothes made of light, cool fabrics. Likewise, many different kinds of wildlife also “dress” for the season. Some birds, for example, are cloaked with fewer feathers in summer than winter. The breathtakingly beautiful American goldfinch has hundreds fewer feathers now than in cold weather.

The next time you see a white-tailed deer slipping into your garden late in the afternoon to take a bite or two of your black-eyed peas, you might notice that it has shed its heavy gray winter coat for a lighter, reddish brown summer pelage. The summer coat is composed of thousands of fewer hairs. This permits air to reach the deer’s skin. It also allows what little sweat a deer produces to quickly evaporate and cool the animal. If you see the deer panting, it is also ridding itself of body heat.

When it gets this hot, heat advisories constantly recommend that we confine any strenuous physical activity to early and late in the day when temperatures are lower. Many animals that are usually active throughout the day also adopt this strategy. That is why activity around our feeders in August is usually greater soon after the sun is rising and when it is sinking in the west.

Believe it or not, it can even get too hot for sun-loving butterflies. When the thermometer tops 100, some species seek refuge in shady spots. If you have a sharp eye, you can sometimes spot them clinging to the undersides of leaves or perched on foliage in shade where they are much cooler than they would be in direct sunlight. 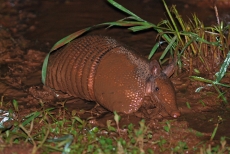 Often birds will stop calling and foraging for food as the temperature rises. At such times, they retire to thick shrubs and the dense canopy of trees. To see what I am talking about try this: On a day forecast as hot and sunny, count the number of bird species you hear or see as you putter around your yard early in the day. Then go outside in mid-afternoon and see how many you see and hear. Typically at this time of the year, I can tally 18 species during the cool morning and only eight in the afternoon heat.

Frogs, toads, lizards and snakes are often difficult to find out and about on hot days. When it gets stifling hot, they will seek shelter beneath logs or deep within burrows where temperatures are much cooler.

Youngsters and oldsters alike seek relief from high temperatures by going swimming. Some of our wildlife neighbors also make a bee-line to water when it gets hot. In my yard, bluebirds, catbirds, tufted titmice and others regularly bathe in my bird baths during hot summer days.

On a hot day a few weeks ago, a couple in Forsyth was startled to see a red-shouldered hawk bathing in their birdbath. The large bird had its wings outstretched while immersing its chest and stomach in the water.

Armadillos, the bane of homeowners across much of the state, also like to cool down when it is hot. One evening I watched a couple of armadillos wallow in the soupy mud below a bird bath equipped with a mister. When I heard something unusual out in the dark, I walked up on two armadillos literally wallowing in the cool mud. They were so intent on stretching out and rolling from side to side in the sticky mud, I was able to get within a few feet of them before they ambled off into the shrubbery.

Generally speaking, while few folks like to sweat, sweating is an efficient way to dissipate body heat. Unfortunately, for all practical purposes, many animals, from the family dog to deer and birds sweat little if at all.

The bats that roost in your bat box or behind the shutters of your house have an interesting alternative to sweating. During hot weather, the blood vessels in their ears and wing membranes dilate. This greatly increases blood flow through the vessels close to the skin, enhancing heat loss through the skin membranes. In an effort to aid this process, bats will sometimes stretch out their wings.

Birds will also hold their wings out to lose heat. This behavior is often displayed by vultures, cormorants and anhingas.

Birds cope with heat in a couple of other ways, too. On a hot day, if you spy a bird, like a brown thrasher, with its mouth open, very likely it is panting. As the air passes out of the bird’s mouth, heat is lost. Over the course of a day, a panting robin can rid itself of half of its metabolic heat.

Other birds such as mourning doves, quail and turkeys dissipate heat through gular flutters. These birds lose heat by rapidly fluttering the loose skin beneath their bills.

Like us, many wild animals drink more water in hot weather. White-tailed deer obtain much of their water from the food they eat. However, when it is hot and dry, the water content of these foods drops. In response, deer will sometimes drink a half to one-and-a-half quarts more per day than they would normally.

In comparison, doves – birds that rely on surface water to meet their water needs – drink four times more water when temperatures reach 100 degrees F than they do when the temperature hovers around 70°F.

Many people today were not even born before the widespread use of air conditioning. As such, they can’t image how folks coped with the heat way back then. Like our wildlife neighbors, those of us old enough to know what it was like to live and work without it managed to find a way. Wild animals have been finding a way to deal with the heat for thousands of years.

From the number of animals I see in my backyard, they are doing a good job of it.