Out My Backdoor: This Backyard Predator is a Scary One

Whenever I walk out my backdoor I step into a world where countless life and death struggles are played out every day. However, unless I actually see something like a robin pull a wiggling worm out of the ground or a fly struggling in a spider web, most acts of predation go unnoticed.

During summer, a bevy of predators inhabit a typical Georgia yard. The more familiar ones include birds, snakes, toads, frogs, spiders, dragonflies, cats and dogs. Yet, one of the deadliest predators that hunt our yards is an animal known as the robber fly.

It isn’t the largest or smallest insect in your yard. It isn’t even the most striking. When you take a close look at one, however, you will find it is scary enough to star in a horror movie. 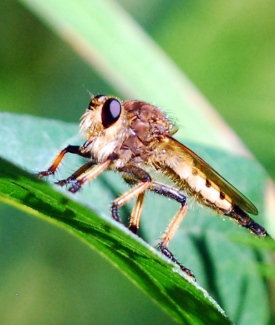 While I am sure you have seen this aerial killer, you probably didn’t even give it a second glance, let alone recognize it as a deadly predator. About 1,000 species of robber flies inhabit North America. They vary widely in size, from half an inch to 2 inches long.

Most are drab and look much like large, long-legged house flies. Many are quite slender with hunched backs. Their hairy abdomens are typically thin. However, it is their heads that grab your attention. Their large eyes face sideways instead of straight ahead. Additionally, the tops of their heads sharply dip between their eyes.

And then there is the fly’s beak. This lethal weapon is stiff and festooned with bristly hairs. Hiding within the beak is an extremely sharp knife-like structure. It takes only a quick glance at this formidable cutting instrument to understand why robber flies are also called stiletto flies. Fortunately a robber fly won’t use this weapon on you unless you decide to catch it. If you are successful, get ready to experience a very painful bite.

Robber flies hunt from perches. Preferred perches include the tips of twigs and leaves and logs. The thing they have in common is they offer the robber fly an excellent view of its surroundings. Since robber flies often use the same perch day after day, once you locate one you can watch the insect’s fascinating hunting habits whenever you like.

One summer a large robber fly selected a bare twig on a tree outside my office window as its perch. Each day I watched this flying predator fly off its perch, trying to capture prey in midair. After each foray, it would return to the same spot and wait for the next potential victim to pass by.

If you observe a robber fly for any length of time, it quickly becomes apparent this skilled hunter eats a wide variety of critters including many that are much larger than it. Among the vast array of prey are butterflies and moths, beetles, grasshoppers, flies and bees. Being a true cannibal, they will also eat other robber flies. Female robber flies have even been known to devour potential mates.

Robber flies are constantly in an attack mode. When one spots a hapless insect close to its perch, the fly immediately takes wing tries to chase it down. If successful, it will grab the beast around the head and back and clamp down. The robber fly then thrusts its dagger-like beak deep into the insect’s thorax or head.

The hairs surrounding the beak help hold the knife-like weapon in the wound while the fly injects a lethal brew of digestive juices and powerful nerve toxins. The deadly brew renders the prey helpless and quickly liquefies its body tissues.

After the prey is subdued, the robber fly lands and slurps up the nutrient-rich insides of the hapless insect. Its meal complete, the robber fly drops the empty exoskeleton of its prey and returns to its hunting perch to await its next victim.

Since the robber fly is a creature of habit, if you patiently watch one hunt, you can locate the spot where the predator dines. There you will find the numerous discarded hulls of its victims.

Bee keepers often refer to the robber fly as the bee killer. It is so named because, much to their chagrin, it will sometimes set up its hunting territory close to their bee hives. From a nearby perch the aerial killer will dine on the constant stream of worker bees that comes in and out of a hive throughout the day.

However, when a robber fly, also dubbed the assassin fly, patrols our gardens and dines on a wide array of garden pests, we consider it a valuable insect.

Like most of you, I enjoy watching television shows featuring charismatic predators such as grizzly bears, wolves, lions and tigers. Chances are I will never watch any of these creatures hunt in the wild.

However, I find solace in knowing that, without leaving my yard, I can witness untold true life adventures involving an amazing array of equally awesome predators hunt their prey. You can, too.