Out My Backdoor: The Amazing Opossum (No Kidding)

If I asked you to make a list of the animals that inhabit your backyard, I am sure that list would include scores of birds, butterflies, squirrels, toads, the chipmunk and an assortment of other critters. I would venture to say most people would not include the Virginia opossum.

One reason for this may be that since the animals are nocturnal, they are rarely seen wandering about in backyards. Yet, whether you live in the country, suburbs or city, chances are opossums visit your yard.

Even those who have seen opossums in their yards rarely speak highly of them. This is unfortunate, because the opossum is one of the most fascinating native mammals living in the Peach State.

One of the things I admire most about the opossum is that it is a survivor. The opossum has been around for a very long time. In fact, fossil records indicate that relatives of our opossum (the Virginia opossum) were once scampering around trying to avoid dinosaurs.

While countless animals have become extinct since that time, opossums have survived. Today, even though hundreds of thousands of acres of wildlife habitat are lost annually, the opossum continues to prosper.

The opossum is even expanding its range throughout the country. At one time, the opossum was found only in the South. However, John James Audubon's journals reveal that the mammal had already reached southern New York by the 1850s. Now, opossums are found throughout the Midwest and Northeast, including as far north as southern Vermont and New Hampshire. 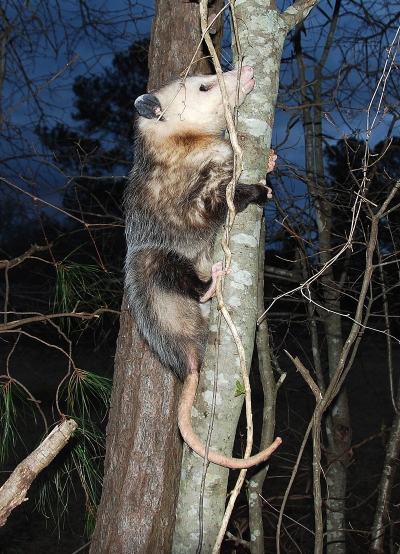 This is quite a feat for an animal that does not wander very far in its lifetime (12-264 acres) and is about the size of a house cat, measuring only about 3 feet in length – including a 12- to 14-inch tail. The average opossum weighs about 5-6 pounds, with males weighing more than females. The world-record opossum tipped the scales at 15.4 pounds.

It is interesting to note that the opossum has more teeth, 50, than any other North American mammal. Also, the opossum is the continent’s only mammal that has a prehensile tail regularly used when climbing.

Actually, the opossum uses its tail in a bizarre manner. When the animal is preparing a nest in a hollow tree, a hole in the ground or another sanctuary, it carries leaves and grass used to line its nest with its tail, tightly held along the underside of its body.

But to me, the most amazing thing about the opossum is what happens immediately after it gives birth. Females give birth to as many as 18 young – the usual litter is six to nine – after a pregnancy that lasts only 13 days.

Remarkably, these tiny, poorly developed newborns, each weighing about 1/700th of a pound, must make their way to their mother's pouch. (The opossum is the only native mammal in North America with a pouch.) This journey is made by animals that are blind and smaller than a honeybee. Once they reach the mother's pouch, the newborns must locate one of her nipples. These nipples are arranged in a "U" pattern, with one in the middle. If unable to latch onto a nipple, the newborn opossum will die.

Typically, only seven to nine youngsters per litter survive a month after birth. When the young are 2 months old, they are about the size of mice. As they continue to grow, they eventually leave the pouch and ride on their mother's back. At 3 months, they are can survive on their own.

One of the most widely told stories is that opossums will play dead when faced with danger. This is popularly known as playing opossum. The truth, however, is that opossums will also run from danger and try to seek safety in a tree or burrow. Noted nature writer Leonard Lee Rue III reported that out of literally thousands of opossums he encountered in the wild, only about 50 "played opossum."

When playing opossum, the animal becomes limp, saliva drips from its wide-open mouth and its tongue hangs out.

Scientists have learned this condition is brought about by the opossum's body producing a chemical that literally causes paralysis of its muscles. This state is often likened to somebody fainting.

Although they will sometimes show their teeth and hiss when cornered, opossums are rarely aggressive.

Several years ago I received a call from a lady who said she and her children had stayed in their home for three days because they had encountered an opossum in their yard. Somebody had told her the opossum obviously had rabies and intended to bite them.

She was relieved when I said her fears were unfounded: The opossum was simply trying to scare her away and, unlike some other animals that might visit her yard, opossums seldom pose a health risk because they rarely carry diseases such as rabies or distemper.

Nor do they pluck our prized tomatoes from the vine or eat our butterbeans, as some other backyard visitors do. Instead, the opossum prefers to eat fallen fruit, small mammals (including mice), insects and the like. As such, the opossum helps control some of the animals that are sometimes harmful to our garden and ornamental plants.

It is true that opossums will eat leftover pet food, or bird seed that has fallen onto the ground. They also will sometimes tip over garbage cans. However, a number of other critters such as raccoons, dogs, cats, and others are usually the perpetrators of these petty crimes.

I hope you will agree with me that although the opossum is not as beautiful as a monarch or cardinal, it is both beneficial and intriguing, and deserves a place in our backyard wildlife community.