Out My Backdoor: Bluebird Nesting – A True-life Drama

To me, having a pair of bluebirds nest in my backyard is a really big deal. It means that I provided the birds with a much-needed place for them to lay their eggs. It also guarantees that I will be regularly seeing one of our most colorful birds for weeks to come.

Let’s take a quick glimpse at the compelling story of bluebird nesting. I am convinced that once you get a feel for what goes on in and around a nesting structure, you will better appreciate why bluebirds nesting in your yard is such a special event. 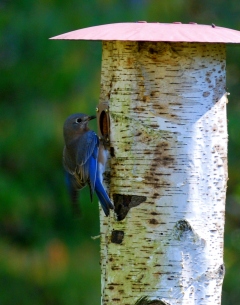 After a male eastern bluebird selects a nesting territory, he tries to attract a mate. If he is successful in convincing a female that he is Mr. Right, he escorts her to the nesting sites within his domain. She carefully inspects each one before choosing one she considers the best of the lot.

She then faces the task of constructing the nest. Some females actually begin building a nest within hours of making their choice. Others may wait a few days before they begin collecting materials. Some persnickety females will actually begin working on nests at several locations before finally focusing in on the box or natural cavity where they will lay their clutch of eggs.

Nest building may take as little as two days, but four to five days are the norm. Other females may stretch nest building out for as long as two weeks.

The nest is cup-shaped and truly a work of art. It is typically comprised of pine needles, grass, straw and twigs. Occasionally, it will also include feathers and hair. In my neck of the woods, bluebird nests are almost exclusively made of pine needles.

Bluebird nests usually contain four to five eggs. Clutch sizes range from three to seven. The number of eggs in a clutch is often related to the age of the bird laying them. First-time nesters often lay only four eggs. The clutches of females 2 or more years old typically number four or more. These eggs are usually light blue. However, 5-9 percent of bluebird eggs are white.

Strangely, some females will lay their eggs in the nests of other bluebirds. At any rate, once a female begins laying her eggs she will lay one a day until the clutch is completed. Each egg is usually laid before mid-morning.

Incubation doesn’t begin until the last egg is laid. This insures that all of the eggs will hatch at approximately the same time.

The job of incubating the eggs falls to the female. The fact that male bluebirds are sometimes seen entering boxes has led some to believe that the male assists in this time-consuming chore. In truth, males that enter boxes during this time have been found to actually stand beside their mates as they continue incubation.

In some cases, the male will sit on the eggs for very brief periods of time while the female is temporarily away from her nest. This is thought to be done more to keep the eggs from chilling than actually incubating them. Once incubation commences, the eggs cannot survive being chilled for a prolonged period to time.

Incubation can take anywhere from 13 to 20 days. The length of the incubation is affected by how many times the male brings his mate food as well as the air temperature in the box. Low temperatures and less food extend incubation.

Once the eggs begin hatching, they will all hatch over a period of about a day. For some reason, the eggs usually hatch in the order in which they were laid.

The hatchlings emerge naked, blind, immobile and helpless. As a result, they totally depend on their parents to feed and protect them. Additionally, since they enter the world with no feathers, they cannot regulate their body temperature. In cold weather the female will brood her young to keep them warm. Although the male may join her in the nest, he doesn’t assist in brooding.

Feeding the young is a monumental task and requires the undivided attention of both parents. In Georgia, where bluebirds nest two to three times a year, the young hatched earlier in the year will often assist in feeding their younger brothers and sisters.

Each hatchling is fed, on average, once every 20 minutes throughout the daylight hours. At first, the young are fed soft-bodied insects such as caterpillars. However, as they mature, hard-bodied insects are added to their diet.

Have you ever noticed that after a brood of young bluebirds have “flown the coop” you never find any droppings in the box? The reason for this is that the young birds’ dropping are surrounded by a thin membrane known as a fecal sac. These are removed by the parents and dropped some distance from the nesting site. It is thought that this helps keeps odors down, which, in turn, reduces the chances that predators will find the young.

When hatchlings are 8 days old, their eyes begin to open. Pin feathers begin appearing within 10 days of hatching. Once the youngsters are 12-14 days old, they become very skittish and will bail out of a nest if disturbed. For this reason, nest-box checks should be curtailed when the young bluebirds reach this age. The young are ready to take their first flight when they are anywhere from 17-21 days old.

The young birds often have to be coaxed out of their secure home by their parents. If a young bird is too weak or simply refuses to leave, after a few hours the parents will abandon it.

Once the fledglings take wing, they don’t return to the box. However, for the next three to four weeks they are fed by their parents.

I would like say that all bluebird nesting attempts are successful. In truth, they aren’t. Females, their eggs and the young are all vulnerable to a wide range of hazards. Birds such as house wrens will peck bluebird eggs. Predators such as rat snakes, cats and raccoons are always a threat. If that isn’t enough, parasites such as blow flies can kill hatchlings.

Consequently, although the sight of a bluebird box standing at the edge of your yard may seem serene, you now know that the bluebirds using it are engaged in the deadly serious business of trying to raise their young.

With that in mind, who needs to watch a contrived reality show or drama on television when a true life drama is being played out just outside your backdoor?

Terry Johnson is a former Nongame program manager with the Wildlife Resources Division, a backyard wildlife expert, and executive director of TERN, the friends group of the Nongame Conservation Section. (Permission is required to reprint this column. Contact rick.lavender@dnr.ga.gov.)