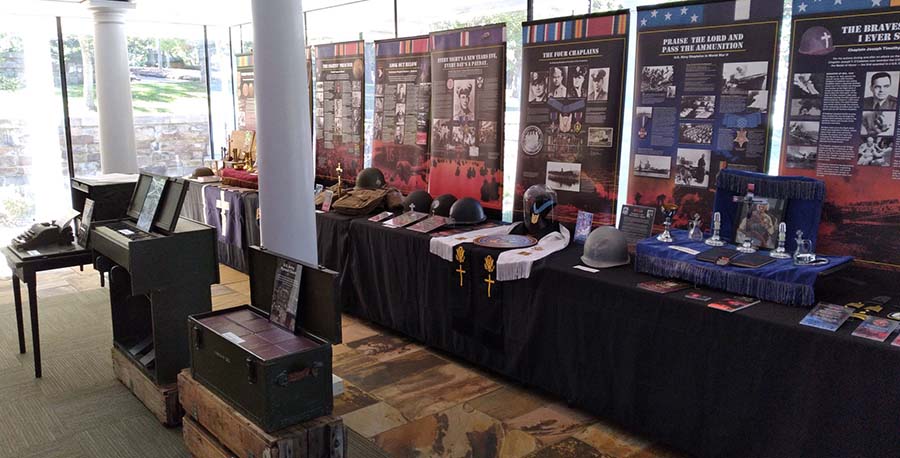 Faith and Courage
The traveling exhibit, “Faith and Courage”, recognizes the contributions of a special group of veterans whose story is rarely told, U.S. Military Chaplains. Chaplains’ dedicated service to those who go into harm’s way for our country, their humble self-sacrifice, and their common, but little-known acts of heroism exemplify personal values, traits, and traditions that are of unquestionable benefit to any society. On display through the end of the year.

Poignant and profound, Roosevelt's Little White House stands as testimony to the neighborly association of President Franklin D. Roosevelt to the citizens of Georgia, the nation and the world, bears witness to his battles against the dreaded illness of polio, economic depression and world tyranny, and stands as a moment frozen in time when the world heard of his death there on April 12, 1945.

Now a National Historic Landmark, Franklin Delano Roosevelt built the Little White House in 1932 while governor of New York, prior to being inaugurated as president in 1933. He first came to Warm Springs in 1924 hoping to find a cure for the infantile paralysis (polio) that had struck him in 1921. Swimming in the 88-degree, buoyant spring waters brought him no miracle cure, but it did bring improvement. During FDR’s presidency and the Great Depression, he developed many New Deal Programs (such as the Rural Electrification Administration) based upon his experiences in this small town.

While posing for a portrait on April 12, 1945, FDR suffered a cerebral hemorrhage and died a short while later. Today, the “Unfinished Portrait” is featured in a museum that showcases many exhibits, including FDR’s 1938 Ford convertible with hand controls, his Fireside Chats playing over a 1930s radio, his stagecoach and a theater. Visitors can tour FDR’s home, which has been carefully preserved very much as he left it, the servants and guest quarters, and the nearby pools complex that first brought the future president to Warm Springs. Selected as a "Readers Choice" site in Georgia Magazine nine times.

Things To Do & See

Saturday and Sunday Guided Tours: $20 per person. Join the staff historian for a 90-minute guided tour of the Memorial Museum, Grounds and Historic Site at starting at 10:00 a.m. Reservations requested.

The Alabama Department of Conservation and Wildlife Resources announced Friday that Chronic Wasting Disease has been detected in a sample collected from a harvested deer in Alabama, a first for tha

Start planning your fishing adventures for the new year and be sure to review the updated 2022 Georgia Sport Fishing Regulations Guide, says the Georgia Department of Natural Resources’ Wildlife Re