Out My Backdoor: Zebras in Georgia 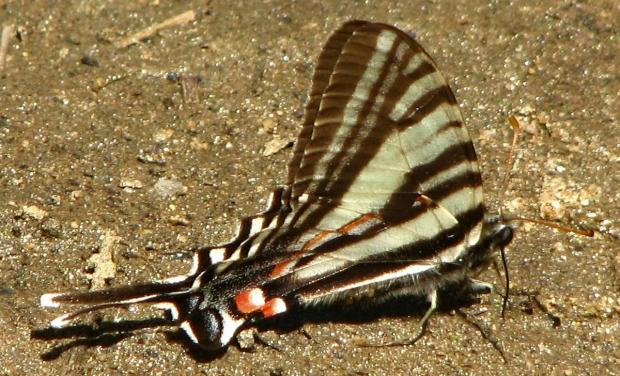 Each year on a warm afternoon in mid-March, I surrender to an urge to head out on a quest to find my first zebra swallowtail butterfly of the year.

From experience, I have learned that I have the best chance of seeing this butterfly in open, hardwood forests. In March and into April, these woodlands are leafless, allowing the bright spring sunshine to reach the forest floor without being filtered out by a myriad of green leaves. The beauty of the leaf-laden forest floor is enhance by scattered patches of May apples nudging their way above the fallen leaves. Colorful violets are in full bloom. It is indeed a great time to make a trek through the woods.

I am sure this description does not fit your image of an ideal place to find butterflies. However, to a male zebra swallowtail seeking a mate, or a female searching for special plants on which to deposit her eggs, this habitat is just right. In order to understand why this is the place to look for zebra swallowtails, I should tell you a little about this species.

Although it is small (wingspan: about 3 ½ inches) compared to the other swallowtails seen in Georgia, its diminutive size does not take away from its striking appearance. Once you have seen your first zebra swallowtail, it will be hard to confuse it with any other butterfly found in our state.

The butterfly's wings are marked with alternating bold black and white stripes. Each hindwing is adorned with long white-fringed, sword-like extensions. Interestingly, the zebra swallowtails that appear later in the year are larger, darker and have longer tails than those that emerge in the spring.

In the Peach State, you have a chance of spotting a zebra swallowtail anytime from early spring into fall. However, I personally see more zebras in the spring than at any other time. However, much to my chagrin, in recent years I can count the number of zebra swallowtails seen for the entire year on the fingers of one hand.

Typically, male zebra swallowtails fly in a bat-like manner, staying within 6 feet of the ground as they look for possible mates. Females tend to fly up and down.

The reason zebra swallowtails are flying about in the woods is because this is where their host plant grows. In general, although most adult butterflies will nectar at any number of different kinds of plants, many butterflies will lay their eggs on just a few plants. In the case of the zebra swallowtail, locally it will lay its eggs only on the pawpaw. The pawpaw I see most often see where I live in middle Georgia is the dwarf pawpaw.

Why the pawpaw? If a zebra swallowtail lays her eggs on another plant, once the caterpillars hatch they would not eat the plant and die.

The dwarf pawpaw is such an unremarkable looking plant that one has to wonder why in the world it serves as the host plant for the zebra swallowtail. The answer may be because the plant produces poisonous chemicals that discourage most plant-eating animals from dining on it. One exception is the zebra swallowtail's caterpillar. It can consume the plant with impunity. Noxious juices ingested by the caterpillar are harbored by the insect even when it transforms into an adult. These toxins are thought to protect them from would be predators such as birds. If a bird munches on a zebra swallowtail caterpillar, it will not try to eat another.

Another interesting fact is that zebra swallowtail caterpillars are cannibalistic: They do not hesitate to eat one another. It is believed because of that trait, the female zebra swallowtail lays only one egg at a time before moving on.

If you watch an adult zebra swallowtail feed, you will notice that it shies away from flowers with deep, tubular throats such as coral honeysuckle. The reason for this is that this species has a shorter proboscis than other swallowtails, such as the eastern tiger swallowtail. In addition, while it will feed on a variety of nectar plants, it is partial to white flowers.

Zebra swallowtails will venture away from wooded areas. I have seen them in clearcuts, open pine woodlands and along the banks of the Ocmulgee River as I drifted down the river, casting popping bugs against fallen snags. I have also spotted them during turkey hunting season, flying across open fields as I sat beneath a large oak trying to coax a wily gobbler into the open.

Zebra swallowtails will also visit backyards. Unfortunately, I have not seen one in my yard, which reveals that few, if any, papaws are growing nearby. It seems this zebra rarely ventures far from its host plant.

When my wife and I built our home on the site of an old farm more than 40 years ago, I did not disturb a single dwarf pawpaw clinging to the small knoll near where our house sits. But obviously, if I want to have any chance of attracting a zebra to my yard, I am going to have to plant additional pawpaws.

Should you decide to search for zebra swallowtails, I recommend visiting a Georgia DNR wildlife management area or park where you can find woodlands that include pawpaws. I have found zebras at Indian Springs State Park near Flovilla. These were spotted along the nature trail hugging the creek that meanders along the right side of the park, just inside the park entrance. I once watched a puddle party of zebra swallowtails along the sandy shore of the Towaliga River below the dam at High Falls State Park near Jackson.

In early spring, zebra swallowtails can also be seen in the woods that surround the DNR Nongame Conservation Section Office on the Rum Creek Wildlife Management Area, near Forsyth. I often see zebras there without leaving the parking lot. This is where I was lucky enough to see my first zebra of the year a few weeks ago.

Considering zebra hunting in Georgia? I hope so, and I hope you see one soon.