Out My Backdoor: Winter Robins 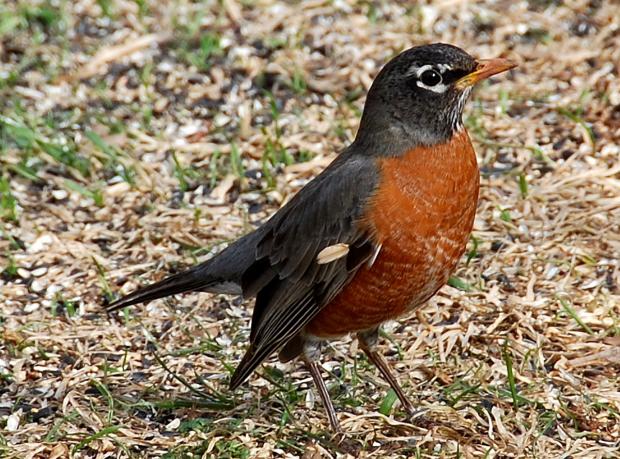 The American robin is inexorably linked to spring. This is because many Americans believe that after a long, cold and bleak winter, the appearance of a robin in their backyard is a sure sign that winter’s icy grip on the land is weakening and spring is just around the corner.

I must admit I have never considered the American robin to be a harbinger of spring. To the contrary, I associate robins with winter. I guess the reason is that although I see them throughout the year, I see many more robins in winter than during all other seasons combined.

A quick check of the Georgia Breeding Bird Atlas will tell you that nowadays this well-known bird breeds throughout most of the Peach State, with most nesting north of the Fall Line. This has not always been the case, however. Up until the early 1900s, American robins were known to nest in Georgia only in our northernmost counties.

Biologists attribute this expansion in breeding range to the fact the unlike many species, the American robin has been able to successfully live close the humans. As a result, you are just as likely to see robins on the grounds of Piedmont Hospital in Atlanta as you are in pastures or lawns scattered across the state. As such, since robins also winter in Georgia, like me you are likely to see robins in your backyard throughout the entire year.

However, the numbers of robins we see during spring and summer pale in comparison to the numbers we see during colder months. It seems that during fall and winter vast flocks of migratory robins visit Georgia. These birds breed north of the Peach State.

The size of these flocks can sometimes be mind-boggling. Eloise Potter, in her book entitled “Birds of the South,” describes one such flock seen roosting in pinewoods near New Hope, N.C., during the early part of the 20th century. The size of the flock was estimated at several million robins. In 1993, a flock of an estimated 2 million robins was seen flying southward along the Ocmulgee River during the Piedmont National Wildlife Refuge/Rum Creek Wildlife Management Area Christmas Bird Count.

During the winter, the robin's diet is quite different than it is during spring and summer. If you have seen a robin hunting for food on your lawn, you know these birds use a very distinctive technique to spot and capture worms. The robin will run a short distance across the grass, stop, cock its head on an angle and wait. Just when you think it will never move, the bird will jab its bright yellow bill into the ground and pull out a long, juicy earthworm.

Indeed, earthworms are an important part of the robin's diet. However, robins also eat a number of other invertebrates, many of which are pests to farmers and backyard gardeners. For example, robins dine on everything from cutworms to beetles. In fact, during the spring and summer invertebrates make up the lion's portion of the bird's diet.

However, American robins will also eat fruits such as cherries, blackberries and strawberries. And during fall and winter robins typically feast more on berries and fruits than worms and insects.
If you would like to put out the welcome mat for winter robins, here are a few simple things you can do.

Begin by stocking your home landscape with trees, shrubs and vines that retain their fruits and berries well into winter. Although a number ornamental plants do just that, you are always better off using native plants.

One exotic plant that is all too common throughout the state is Chinese privet. Unfortunately, robins relish privet berries. However, privet is highly invasive and should not be used in your landscape. Sadly, this genie is out of the bottle: Privet blankets vast acreages and is choking out native plants. Trying to eliminate privet, even in the backyard, seems to be a never ending task.

Pyracantha and nandina are two other exotics that easily escape backyard settings. While they are not among the preferred foods eaten by robins, the red-orange berries these plants bear are eaten late in the winter when food is scarce.

What, then, should you choose? You are far better off providing robins with native plants such as flowering dogwood, hawthorn, wild blueberries (Vacciniums) such as deerberry and sparkleberry, plus holly, American beautyberry, possumhaw, wax myrtle and a number of others.

Sumac is also a favored winter food of the robin. I have seen flocks of robins descend on thickets of smooth sumac to dine on the red, hairy fruit found there. Although sumac is rarely planted in backyard settings, its colorful persistent fruit and attractive foliage can make a great addition to the border of a large yard.

If you plant crabapple trees, select a variety such as Callaway crabapple whose small, hard fruits persist throughout the winter. Also, if you have enough room to accommodate a hackberry tree on your property, you will be rewarded with a wildlife magnet. Robins and a host of other wild critters eat hackberries.

Although the cedar waxwing is named for its fondness for cedar berries, robins and other wildlife also dine on the tree's small berries. As such, consider adding a red cedar to your landscape.

Although the American robin is not thought of as a feeder bird like cardinals and chickadees, they will come to feeders. However, although they will occasionally consume sunflower seeds, they are not big seed eaters. To attract them you are better off serving up an eclectic menu of other foods, varying from suet, cooked spaghetti, peanut butter, nut pieces, doughnuts, cottage and American cheese, to raisins, sliced fruit such as pears and apples, cornbread, currants, mealworms, earthworms, softened dry dog food and oranges.

Some folks provide live earthworms and mealworms offered up in heated dog food dishes to ensure that these live food offerings don't freeze on the coldest days of winter.

Actually, robins are attracted to backyards more often with water than food. Regardless of the season, robins desperately need water for drinking and bathing. Also, placing a feeder close to a bird bath will sometimes hasten a robin's acceptance of your food offerings.

Robins will also hunt for earthworms and beetles on your lawn during warm winter days. As you might expect, lawns treated with a toxic dose of pesticides attract fewer robins than those left untreated.
If you are looking for a challenge, try some of the suggestions offered here. If you are successful in attracting what some say is America's favorite bird, you will have the opportunity to enjoy the robin’s beauty during the bleakest season of year.

Even if your efforts fail to entice robins to your yard, a host of other wildlife neighbors will benefit from your efforts. Now that is what I call a win-win situation.