Out My Backdoor: A Wildlife Food Plant We Love to Hate

When we are youngsters learning about the wonder and perils of the great outdoors, our parents taught us a number of valuable lessons aimed at keeping us out of harm's way. For example, we are taught that it is not a good idea to grab a bumblebee, or try to eat every berry we see. We also learned to recognize and avoid poison ivy at all cost. Often parents taught their children this important lesson using a short poem that goes like this, "Leaves of three, let them be."

A lesson rarely taught, though, is that while it’s true that poison ivy is an itchy problem that most folks who touch it have to contend with, this reviled plant is actually an important wildlife food plant.

We will never know who, when or where humans first had the misfortune of getting too close and personal with this native plant. However, I am certain that long before the first Europeans set foot in North America, native Americans were keenly aware of the irritable qualities of the ubiquitous plant.

It didn't take the first European colonists long to get up to speed on poison ivy's dark side. As early as 1609, John Smith, one of the most renown inhabitants of the Jamestown colony, wrote, "The poisonous weed, being in shape, but very little different, from our English Yvie, but being touched causes redness, itching and lastly blisters, the which however after a while they pass away of themselves without further harm." 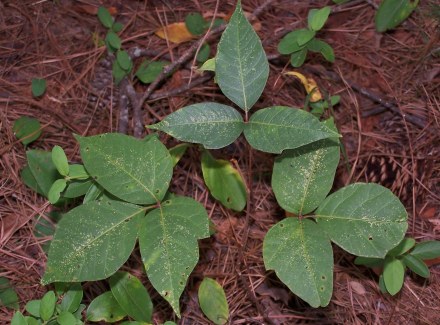 Oddly, poison ivy can display many faces. It can look much like a shrub even, though it is most often seen growing as a vine. Some poison ivy leaves can reach a length of 10 inches, whereas others rarely measure more than an inch or 2 long. If that isn't confusing enough, some poison ivy leaves are rough while others are waxy.

That being said, regardless of which face a poison ivy plant may be wearing, one thing remains constant: Its leaves are always arranged in threes. Two leaves are opposite one another, and between them the third leaf is borne on a longer stem growing at a right angle from the two shorter leaves.

The chemical that causes an allergic reaction in humans is a sticky, pale yellow oil named urushiol. You might be surprised to learn that urushiol is found in all parts of the poison ivy plant except on the surface of the leaves, unless the leaves are damaged in some way.

Stranger still, urushiol is not poisonous. It is only when it is absorbed through our skin and combines with skin proteins that another chemical is created. This chemical causes an allergic reaction. The whole process takes place only if urushiol is allowed to remain on the skin for about five minutes.

Typically, blisters and a rash will appear anywhere from 12-48 hours after the plant has been touched.

If you accidentally touch poison ivy, one of the best things to do is wash the exposed skin with cool water. Soap should be avoided if it contains oil. Oils actually help spread the poison. Another approach is to bathe the skin with alcohol and then rinse the exposed area with water.

If you are off somewhere enjoying nature and have a run in with poison ivy, you might try to find a stand of plantain or jewelweed. Some folks swear by the old-time remedy of smearing the juices of jewelweed or plantain on skin exposed to the dreaded plant. Supposedly, these plant juices soothe the itch and even prevent a rash from developing.

As unsavory as poison ivy is to humans, it is a great source of food for a host of our wildlife neighbors. Yes, these animals show no allergic reaction to the plant even when they devour its berries, leaves and stems.

The list of mammals that dine on poison ivy include white-tailed deer, black bears, wood rats and muskrats. Birds are especially fond of poison ivy berries. The plant's waxy, white berries are loaded with vitamins and other nutrients. If that isn't enough, they are available to south-bound migrants in mid-summer as well in winter when food is at a premium.

Remarkably poison ivy even helps animals locate the berries. The plant’s green leaves turn a brilliant red in the early fall. This colorful foliage acts as a "red flag" to hungry wildlife.

It has often been said that beauty is in the eye of the beholder. Such is the case with this poison ivy. Would you believe that it has been introduced into England, Australia and Europe as a garden plant? There is it prized for its attractive foliage.

We humans have also discovered other uses for poison ivy. It has been used as a dye, ink and an ingredient in varnishes. Researchers have also learned that it possesses medicinal properties. For example, poison ivy has been used to treat various skin disorders, paralysis and arthritis.

The plant that is known for its leaves of three grows in most of our backyards. As such, I am willing to bet that the vast majority of us spend a lot of time and money eliminating it from our yards. Yet, in spite of our efforts, some poison ivy plants find a way to survive along the fringes of our manicured yards.

Here, year after year it offers our wildlife neighbors much needed food in a landscape where we have eliminated most of their native food plants.