Out My Backdoor: Summer Bird Feeding — Give It a Try

At one time, like most Georgians, I stopped pouring seeds into my bird feeders when winter finally gave way to spring. I would not resume feeding until frost blanketed the ground in autumn.

However, more than 25 years ago, I began feeding birds into summer and beyond. This has dramatically enhanced my enjoyment of the birds that live in my backyard. 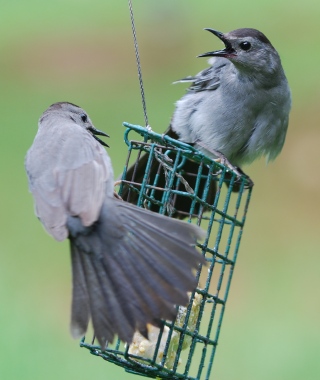 Summer bird feeding is not a new concept. It dates back at least to the late 19th century. An early writer named Florence Merriam wrote that a lady living in Vermont fed birds around her home in the summer during the 1890s.

For some reason, the idea of feeding birds during the summer never really caught on until the middle of the 20th century, when hummingbird feeders began showing up in backyards across the country. Even then, few offered food to birds other than hummingbirds.

In recent years, however, more folks are joining the growing ranks of those who feed birds during the summer months. In fact, one study found that at least 32 percent of Americans now feed birds in the heat of summer.

If you decide to embrace this growing pastime, you will quickly discover that fewer bird visit feeders in summer than winter. There are a number of reasons for this. First of all, many birds find food more abundant in summer.

Additionally, many of the birds that dine on seeds during the winter expand their diet to include large numbers of insects. When this happens, they visit feeders less frequently. Take the cardinal, for example. It might eat seeds almost exclusively in winter. However, insects comprise upward of 40 percent of the food it consumes in summer.

Another reason is that during the winter, some species form large flocks that move about foraging for food. By summer these flocks have broken up and the birds are scattered across the countryside nesting and raising young.
Also, some of our favorite winter visitors such as white-throated sparrows, dark-eyed juncos, pine siskins and purple finches have long since departed for their more northerly breeding grounds. They leave behind a host of birds that spend the entire year in our backyards. These permanent residents include eastern towhees, chipping sparrows, tufted titmice and Carolina chickadees, as well as downy and red-bellied woodpeckers.

Fewer birds, but some are beauties

Although we lose some feeder favorites, during summer some birds that we never see at our feeders in the winter become regular patrons. For example, if you live in south Georgia, particularly along the coast, you may play host to what is perhaps North America's most beautiful bird – the painted bunting. The male's plumage is a kaleidoscope of vivid scarlet, blue and green.

Two other stunningly beautiful summer guests are the blue grosbeak and indigo bunting. Both of these eye-stoppers nest in the Peach State and retire to the tropics for the winter.

Summer feeder watchers also stand an excellent chance of enjoying the treat of casting their eyes on the male American goldfinch in its breeding plumage. In the winter, males look much like their mates – sparrow-sized, olive brown birds with dark wings marked with white wing bars. In the summer, the males look totally different. They sport black foreheads, wings and tails, and bright yellow backs, breasts and throats.

Another summer resident I always look forward to seeing is the gray catbird. This often secretive bird often drops by to eat suet.

It’s also interesting to see parents bringing their fledglings to my feeders. Although these young birds are similar in size to their parents, their plumage is not yet fully developed. Consequently, they seem drab duplicates of the adults. Upon arrival at a feeder, they often hold their mouths open, chirp and flutter their wings begging for food.

Since you will be feeding fewer birds in summer than winter, you won't need to maintain as many feeders. Although some offer birds meal worms and fruit, I keep my feeding program simple. Typically, I limit my food offering to black oil sunflower seeds in one feeder, white millet in another and suet in a third.

One of the biggest problems you will face is seeds and suet spoiling. Hot, humid conditions are perfect for mold and bacteria to grow on these foods. This, in turn, can lead to a number of diseases that can be contracted by the birds visiting your feeders.

To prevent a disease outbreak, fill feeders with less food than you would in winter. This prevents uneaten food from being exposed to the elements for long periods of time.

In addition, clean up seed hulls and wasted food beneath feeders on a regular basis. Moving your feeders to different locations throughout the summer also helps prevent this problem. In addition, clean feeders regularly with a mild bleach solution (one part bleach to 10 parts water).

If you feed suet in the summer, use a suet that doesn't easily melt and get moldy. Most suet seems to spoil quickly when temperatures top 70 degrees Fahrenheit. Bringing suet into the house and refrigerating it at night helps alleviate the problem. (Incidentally, this will help eliminate raccoons and opossums eating it under the cover of darkness.)

The suet that I prefer to feed during the summer and throughout the rest of the year is called bird butter; it seems to hold up better than most suet in the summer heat.

To make this bird favorite you will need:

Melt both the peanut butter and lard over low heat. Thoroughly mix the dry ingredients and stir them into the melted peanut butter and lard. Pour the combined mixture into a cake or cupcake pan and allow it to cool. If you use a cake pan, score the mixture with a knife so that each segment will fit into your suet feeder. When scored, the suet can be easily broken apart. Freeze the mixture and use as needed.

One summer I watched a female bluebird make more than a dozen trips between a block of bird butter and nearby nest in less than 15 minutes. Each time she returned to her hatchlings she brought them a bill full of bird butter.

Another problem that you may encounter is having your feeders taken over by brown-headed cowbirds and common grackles. These birds remain in flocks into early summer. When a flock of these voracious eaters descends on a feeder they gobble up food so quickly that other birds have little chance to feed.

The only solution I have found to this problem is to stop feeding entirely for a week or so. This will often encourage the cowbirds and grackles to will move on.

I hope that you will give summer bird feeding a try. Once you do, I am willing to bet that you will be saying to yourself, "Why haven't I been doing this before?"

Terry W. Johnson is a former Nongame program manager with the Wildlife Resources Division, a backyard wildlife expert, and executive director of TERN, the friends group of the Nongame Conservation Section. (Permission is required to reprint this column. Contact rick.lavender@dnr.ga.gov) Learn more about TERN, The Environmental Resources Network, at http://tern.homestead.com. “Out My Backdoor” columns archive.