Out My Backdoor: Spring Beauties -- on the Wing

The spring bird migration is dwindling down to a trickle. Over the past several weeks, literally millions of migrating birds streaming from their winter homes in the Caribbean, Mexico, Central and South America have passed through Georgia.

Some of them have flown over my middle Georgia home. Although I didn't see them, I am sure a smattering of migrants briefly stopped in my yard to rest and refuel before resuming their long journey.

Fortunately, among the birds that did visit my backyard was one of the most beautiful of all the northbound migrants – the rose-breasted grosbeak.

My wife and I first spotted a male rose-breasted grosbeak a couple of weeks ago. One warm spring morning I just happened to take a glimpse at a feeder hanging outside our dining room window. I could not believe it; a striking, male rose-breasted grosbeak was dining on black oil sunflower seeds alongside a half-dozen pine siskins. My heart was racing as I called my wife to come and take a look at a bird that rarely makes an appearance in our yard.

If you ever see a male rose-breasted grosbeak, you will never forget it. You will also understand why I was so excited. 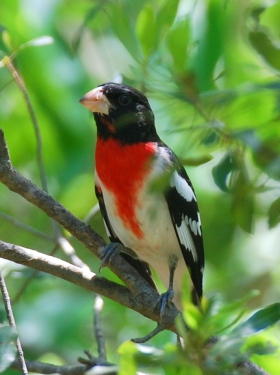 The bird is roughly 8 inches long and sports a large, straw-colored bill. The bird is adorned with bold black and white plumage. The undersides of its wings are rose pink. If that isn't enough to dazzle the eyes, the male rose-breasted grosbeak sports a brilliant red triangle emblazoned on its white breast.
Both the size and shape of the red triangle varies greatly from bird to bird. In fact, each marking is so unique it can be used to tell one male from another.

The female's plumage is more subdued. The upper part of her body is brown while her white and buff breast is marked with fine streaking. The bird's head is highlighted with white stripes.

The rose-breasted grosbeaks now being seen across the state are returning from their winter home in southern Mexico, Central America or northern South America. They are winging toward their summer homes, where they will carry out the all-important task of raising a new generation of young.

A few will nest in extreme Northeast Georgia. However, the vast majority of the birds are headed for the young hardwood forests that stretch from the Midwest to portions of eastern Canada and New England.
Rose-breasted grosbeaks are occasionally seen during the winter in Georgia. In fact, one was spotted last December on the annual Christmas Bird Count at Piedmont National Wildlife Refuge/Rum Creek Wildlife Management Area. However, basically we only see the birds when they pass through the Peach State on their spring and fall migrations. The grosbeaks we are now seeing are on their spring migration, which occurs from April through the middle of May. We will see them again when they head south from the middle of September through October.

One of the best places to spot a rose-breasted grosbeak is at a feeder stocked with sunflower seeds. However, you can also see them perched in trees. The easiest way to locate them in thick foliage is to listen for their distinctive call, which is best described as a metallic kick sound.

If you hear anything like that, look where the sound seemed to originate. If you are lucky enough to spot a rose-breasted grosbeak, unlike most birds, it will often remain in the same spot for an extended period of time.

The rose-breasted grosbeak also utters a robin-like song. Typically, however, they don't sing until they reach their breeding grounds. Interestingly, unlike many songbirds, both males and females sing.

The famous artist John James Audubon immortalized the rose-breasted grosbeak in a painting that appeared in his epic volume “The Birds of America.” An interesting footnote to history relates that Audubon sketched a bird unknown to him while traveling through the Indiana Territory in September 1810. Believing he has discovered a previous un-described species, he named it a variegated grosbeak. Later the bird was correctly identified as an immature rose-breasted grosbeak.

Within its breeding range the rose-breasted grosbeak is sometimes called the potato bug bird. The bird earned this name because it voraciously devours Colorado potato beetles. Some studies have found that the when potato beetles are abundant, they make up a 10th or more of the birds' diet.

Consequently, long ago farmers became fond of these black and white birds when they realized grosbeaks helped control the dreaded pests that threatened their potato crops.

The rose-breasted grosbeak is what biologists call a neotropical migrant. These are birds that nest in North America and winter in the Caribbean, Mexico, Central or South America. Populations of far too many of these long-distance migrants are rapidly dwindling. Sadly, the rose-breasted grosbeak is one of the birds suffering a decline. Surveys suggest that its numbers are dropping at a rate of 0.8 percent per year.

A number of factors are likely contributing to this decline. On their wintering grounds, the species is suffering habitat loss. In addition, south of the border the birds are trapped and sold as pets. Here in North America, another problem is that forests within the breeding grounds are being cut up into smaller and smaller pieces – forest fragmentation. Additionally, since the rose-breasted grosbeak prefers to nest in young hardwood forests, as these forests mature, each year the birds have fewer places to nest.

If that isn't enough, their nests are parasitized by brown-headed cowbirds. Brown-headed cowbirds don't build their own nests. Instead, they lay their eggs in the nests of other birds such as rose-breasted grosbeaks. When this happens, in all too many cases the birds that built the nest end up raising cowbirds instead of their own young.

If you would like to attract one or more rose-breasted grosbeaks to your feeder, keep it full of black oil sunflower seeds.

Also, keep birdbaths full of clean water. Recently two friends that live in Texas called to tell me they had just seen a flock (sometimes called a gross) of 14 rose-breasted grosbeaks bathing in a birdbath in their Aransas Pass yard.

If your efforts prove successful in attracting are a grosbeak or two, you will be able to feast your eyes on one of North America's most extraordinarily beautiful birds. In addition, you will gain the satisfaction of knowing that you provided them with a much-needed place to rest, feed, drink and bathe before resuming their epic migration.