Out My Backdoor: Owls Don’t Deserve Their Bad Reputation

Later this month our homes will be visited by an odd assortment of tiny goblins, witches, ghosts and other strange characters. They will arrive at our front door under a cloak of darkness, and utter three words that we once repeated ourselves too many years ago, “Trick or treat?”

Indeed children dressing up and trekking from house to house in search of candy and other delights is part of the pageantry of Halloween. As we all know there is a handful of animals that are forever linked to this annual event. In fact, more often than we may realize some of these animals may be peering down from a tree watching as a small army of costumed children parade up to our doors.

The animals I am referring to are owls. Their association with a holiday steeped with superstition, witches and things that go bump in the night is unfortunate. This is regrettable as they are, in truth, some of our most valued backyard neighbors and not creatures to be feared.

Long before there ever was a Halloween people throughout the world connected the owl with death, misfortune and even witches. The reasons for this have been lost in the mists of time. Some suggest that it is perhaps linked to the bird’s ability to see extremely well at night, a time when, without the aid of light, we mortals often stumble about.

For thousands of years mankind has tried to find an explanation for the bird’s amazing nighttime vision. To many there was only one answer – witches must have cast a magical spell on these denizens of the night, enabling them to fly about as easily as a mockingbird or mourning dove does in the daylight.The belief that owls consorted with witches and other unsavory characters has long been widespread. This is reflected in the fact that in many societies the word for owl and witch is the same. 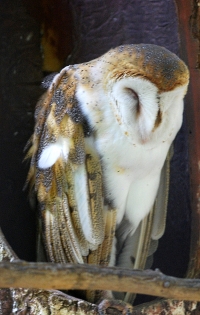 When you gaze at an owl you immediately notice that, unlike most birds, the owl’s head is oval or round and its large eyes face forward. In fact, the owl’s face is so human-like that, in parts of the world, people were convinced that owls were humans that witches magically transformed into owls.

The thing that seems to unnerve people most is not the bird’s appearance but its call. Throughout time the call of an owl has been considered to be a harbinger of bad tidings. To the Chinese, the call of an owl has long been interpreted as a sign that death or illness would soon befall anyone unlucky enough to hear it. The Hindus and Romans shared similar fears. Both believed that the only way they could avoid a terrible calamity was to kill the bird and scatter its ashes into a river. The Hindus also thought that one of the worst things that could happen to a village was for an owl to land atop a hut. If it did , after the birds ashes were strewn into a river, nobody was allowed back into the hut until the thatch touched by the owl was torn out and replaced.

Christopher Columbus also harbored contempt for owls. While preparing for one of his voyages across the Atlantic he referred to owls in his journal as “funeral birds of the night.” The barn owl was dubbed the death owl in Britain. Consequently, it is not surprising that Shakespeare used owl calls in many of his masterpieces to foretell death or create foreboding overtones.

Remarkably, even Native American tribes shared superstitions regarding owls. Many tribes thought that owls possessed great mystical powers. They also believed that spirits used owls to warn of impending death. The Pima Indians of the Southwest had the custom of placing owl feathers in the hand of one thought to be on the verge of passing on. By so doing, they believed that an owl would spot the feathers and realize that the one clasping them was prepared to take the journey to the afterlife.

Closer to home, the great horned, barred and screech owl all played important roles in the spiritual lives of the Cherokees. They believed that these owls, all of which can be found in backyards across the state, could communicate with their Shamans in a strange, silent tongue. The great horned owl, which they called the Magic Maker, was considered the most important of the three. However, each was supposedly imbued with the power to make anyone who veered from the straight and narrow sick.

The folklore of early European settlers is rich in fanciful tales of owls. One folktale tells us that the sound of a screech owl calling outside one’s home was a sure sign of impending death or illness. The tale went on to say that, if an owl’s call was heard outside the home of somebody that was ill, the only way to prevent this person from dying was to dispatch the bird and place its carcass on the chest of the ill person.

This fear of owls was so pervasive that parents taught their children that, under no circumstance, should they ever imitate the screech owl’s call. They reasoned that if a screech owl heard such a call coming from a cabin, it would begin hanging around and eventually fly down the chimney. Once inside, it would then scatter hot coals about the floor which, in turn, could burn the house to the ground.

Fortunately today most folks don’t place much stock in such strange superstitions. To the contrary, instead of trying to avoid owls, we encourage them to nest in our backyards and neighborhoods. However, in spite of our appreciation of the birds often called Mother Nature’s mousetraps, it appears that they will remain regrettably linked to Halloween.