Out My Backdoor: Nature’s Holiday Gifts Wrapped in Red

Nothing makes a youngster’s eyes sparkle on Christmas morning more than presents wrapped in brightly colored paper. I’d venture to say that most of the presents underneath your tree this year will be lovingly wrapped with paper adorned with at least some red. No, I’m not a mind reader. Red is simply the most popular color used at Christmas.

I must admit that red is indeed an eye-catching color. As such, it should come as no surprise that Mother Nature also wraps many of her most nutritious fruits and berries in this festive color. These gifts of nature provide many of our wildlife neighbors with much-needed food throughout the holiday season and the rest of the winter. 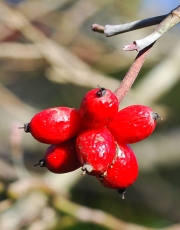 If you take a walk or ride around the countryside after all that remains of the presents that sat beneath your Christmas tree have been reduced to a pile of crumpled wrapping paper and empty boxes, you will notice that -- unlike Santa, who leaves his presents beneath the Christmas tree -- Mother Nature likes to scatter her holiday gifts in a number of places. Many of her presents are bright red berries and fruits that can be found in your backyard, along brushy fencerows, in open woodlands and along roadsides.

Here is a short list of five of these valuable winter food plants.

American holly – Out of the five plants listed here, none is more inexorably linked to the holiday season than American holly. This is because its dark green, spiny leaves and bright red berries are often used to fashion Christmas decorations as well as being mentioned in holiday songs and featured on Christmas cards.

What you probably didn’t know is that more than two dozen birds including the wild turkey, quail, cardinal, mockingbird, robin and bluebird eat the American holly’s berries. While they might not devour them early in the winter, when food gets scarce later in the winter, holly berries are sought out by hungry birds and other wildlife.

A lady once told me that she put branches of holly festooned with berries in her window boxes as winter decorations. Late one winter on a blustery day when she looked out she was surprised to find that a flock of hungry bluebirds had descended on the holly boughs. Before they left later in the day the bluebirds has stripped every last berry from the holly branches.

Yaupon holly – This small tree or shrub is sometimes called Christmas berry. The leaves of the native plant were used to concoct a ceremonial potion that induced vomiting. Today, this dual-purpose plant is used to create attractive hedges. Additionally, the plant’s red berries are choice foods of the cedar waxwing and mockingbird. Why, even wild turkeys and quail eat them.

Possumhaw – Since possumhaw drops its leaves in winter, you might not recognize it as a member of the holly family. This small tree or shrub is most often seen growing in a fencerow. Fortunately, in recent years it has been incorporated into home landscapes. Some of the new varieties being sold at nurseries include Warren Red and Reed. Each produces an abundance of berries.

The possumhaw’s scarlet berries are easy to spot at this time of the year. The berries remain on the plant long after Christmas. Each red, berry-like fruit contains several seeds that are eaten by songbirds. Deer will also forage on the plant’s twigs.

Smooth sumac – Although this small tree or shrub isn’t a plant often associated with Christmas, it should be. Early in the fall, long before the most zealous store begins displaying its Christmas decorations, the smooth sumac’s leaves turn as bright red as a bow on a Christmas wreath. In addition, its fruits are covered with a red velvet-like covering reminiscent of the cloth used to make Santa’s suit.

Look for this plant along overgrown fencerows and in abandoned fields, power line right of ways and backyard borders. White-tailed deer like to munch on its leaves and twigs. Cottontails nibble on the bark and fruit. Also, a number of birds relish the fuzzy sumac fruits, including quail, blue jays, robins, bluebirds, wild turkeys and gray catbirds.

Flowering dogwood – My list of red berries and fruit-bearing plants wouldn’t be complete without mentioning the flowering dogwood. This small tree is just as likely to be spotted growing beneath tall trees in open woodlands across the state as in yards. It is indeed one of our most beautiful trees. In the spring it produces a profusion of greenish white blossoms. Arguably, the tree is just as attractive in the fall when it displays a crop of shiny red berries intermingled with crimson red leaves.

Like a child not wanting to wait until Christmas to open their presents, many wildlife species gobble up most dogwood berries long before Christmas. More than 60 species of wildlife eat dogwood berries including the wood duck, wild turkey, quail, Eastern cottontail, cardinal, Eastern chipmunk, gray fox, red-headed woodpecker, mockingbird, bluebird and summer tanager.

All of the plants mentioned make great additions to any home landscape. If you want to beautify while providing the wildlife living there with winter food, add them to your yard. You will be giving your wildlife neighbors and yourself gifts that will go on giving as long as little girls and boys go to sleep on Christmas Eve listening for the pitter-patter of reindeer feet on the roof.

Terry Johnson is a former Nongame program manager with the Wildlife Resources Division, a backyard wildlife expert, and executive director of TERN, the friends group of the Nongame Conservation Section. His column is a regular Georgia Wild feature.