Out My Backdoor: Mosquito Hawks on Patrol

There is an amazing array of wildlife that live in our backyards. Beyond a shadow of a doubt the two groups of animals that garner most of our attention are birds and butterflies. However, this is slowly changing as more Georgians are beginning to focus their attention on dragonflies. These people have discovered that dragonflies are every bit as beautiful and fascinating as the headliners of the wildlife show staged daily in their backyards. 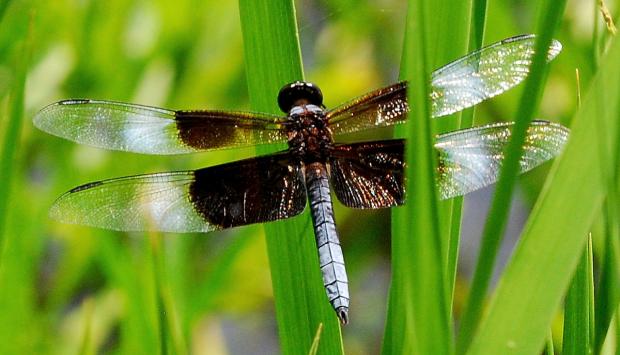 Dragonflies are among the most voracious predators in the animal kingdom. This insect’s insatiable appetite was dramatically demonstrated many years ago by a biologist who set up an experiment to determine how many houseflies it would take to satisfy a dragonfly's hunger. He held a dragonfly in place by immobilizing its wings. He then proceeded to feed the restrained dragonfly houseflies one at a time. Several hours later he terminated the experiment when the dragonfly showed no signs of having eaten its fill.

In the wild, dragonflies are equally insatiable, both as adults and youngsters called nymphs. Fishermen sometimes call these nymphs perch bugs and use them for bait. Mosquito wigglers often make up a large portion of the perch bug's diet. However, they will also devour any number of other aquatic insects and even small fish and tadpoles.

During mating season, dragonflies return to the water. Each male establishes and defends a territory against other male dragonflies. These territories extend along the shore of a pond or stream anywhere from 1-10 feet and can stretch some 30 feet over the water. If a female enters a male's territory, mating takes place in the air.

Females usually lay their eggs by dipping their tails down into the water. Each time their tail brushes the surface of the water, an egg is laid. At times they will even attempt to deposit eggs on shiny cars or concrete, apparently mistaking these surfaces for water. Depending on the species, the eggs hatch anywhere from one to four weeks later.

Various species of dragonflies spend anywhere from one month to five years in the nymph stage. When it is time for a nymph to transform into an adult, it crawls up a plant stem or other object protruding from the water. Once it has emerged, a split forms down the back of the insect’s exoskeleton. The adult dragonfly emerges through this opening. Within an hour or so freeing itself, the adult is ready to fly off in search of food.

Adult dragonflies locate prey both while airborne and from a perch. They capture their prey in the air in a net-like scoop created when they hold their legs together. While mosquitoes, flies and other flying insects comprise the bulk of their diet, dragonflies will sometimes perch near beehives and capture bees leaving or returning to the hive.

They will also prey on butterflies. Some butterfly experts believe that during dry summers when butterflies are concentrated at the few spots where nectar plants are blooming, dragonflies can make serious inroads into local butterfly populations.

The adult dragonfly is well adapted for life as an aerial predator. They are true masters of the air. Some can fly upward of 50 mph. They can also hover and change direction at high speed with ease. And while a dragonfly can generate lift equal to seven times its body weight, our best airplanes can only generate lift equal to 1.3 times the plane's weight.

Dragonflies also have acute eyesight. Their large compound eyes can detect movement several hundred feet away. Interestingly, their eyes are constructed much like bifocal lenses, with the upper portion allowing them to view distant objects and the lower portion, objects close by.

Some dragonflies migrate. At times large numbers are seen migrating southward with flocks of monarch butterflies. Along the Georgia coast, this migration takes place during the time when the folks working the Jekyll Island bird banding station, trying to capture, band and release southbound migratory songbirds. As such, each year numbers of dragonflies are captured in mist nets intended to ensnare birds.

If you would like to become a dragonfly watcher, there are a things that will help you; namely, close-focusing binoculars, a digital camera and a field guide to dragonflies. Close-focusing binoculars enable you to focus on objects 6 or fewer feet away. In addition, a digital camera will allow you to take pictures of dragonflies you encounter. These photos will be of great help when you try to identify these winged predators at your leisure.

Last, one of the best guides to the dragonflies you will see in your backyard is Giff Beaton's Dragonflies and Damselflies of Georgia and the Southeast.

This summer, if you take the time to closely look at a dragonfly or two in your backyard, I am certain that you will be amazed at their colors and their intricate wing patterns. Once you have seen a dragonfly up close and personal I would be surprised if that experience doesn’t make you a fan of the dragonflies that patrol your yard throughout the lazy days of summer.

What is there not to like about an insect called a mosquito hawk?