Out My Backdoor: Misunderstood Morning Glories 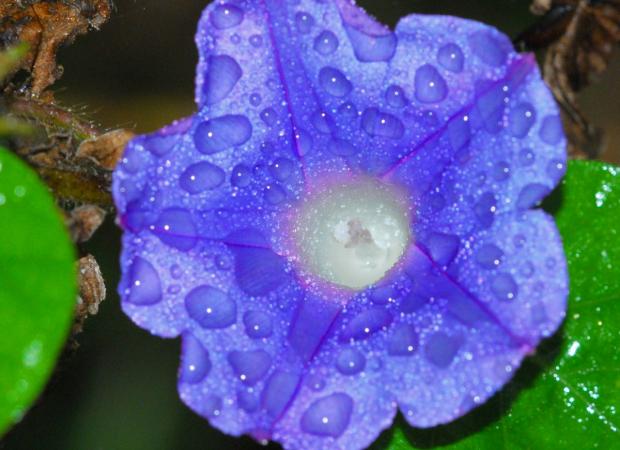 Now that summer has slipped away, the tapestry of my yard has lost most of its color. Gone are the stunning blossoms of bee balm, coneflower, trumpet creeper and other spring and summer bloomers. In spite of my efforts to dead-head my zinnias to prolong the production of blooms, only a scant few blossoms remain of the kaleidoscope of color once provided by hundreds.

Currently, the only plants contributing any color to my backyard landscape and offering food for nectar-feeding bees, butterflies and other insects are butterfly bushes, lantana, Turk's cap and native morning glories that volunteered in my gardens and along the roadside in front of my home.

Although the morning glory is widely recognized where ever it grows, the plant lives under a cloud of confusion. Some people simply adore it, while others revile it. Although it is often planted for its beautiful flowers, it is rarely touted as a wildlife plant. Consequently, we homeowners are left scratching our heads wondering if it is valued member of our backyard plant community or a plant we should avoid.

Part of the reason for this confusion is that, depending on which botanists you talk to, there are anywhere from 1,000-9,000 species of morning glories growing worldwide. Sixteen of them are native to the Southeast. On top of that, plant breeders have developed untold numbers of hybrids.

This makes it very difficult to characterize the plant. Some are perennials while others are annuals. The vast majority of them produce a vine; however, some are shrubs.

A few morning glories have blossoms up to 8 inches wide, while others display tiny blooms only an inch or so wide. Flowers range from bicolored to varying shades of red, white, blue, purple, pink and even yellow. Some morning glories bloom early; others bear their flowers late in the year.

In addition, some are considered invasive species, though most are not.

The one trait that the vast majority of morning glories share is that they produce wide-mouthed, funnel-shaped blossoms.

The morning glory earned its name from the fact that its beautiful, fragile flowers unfurl in the morning. However, as we all know, beauty is often fleeting. Such is the case with the morning glory. The flowers last only a day and begin fading about two hours before the sun dips below the horizon. This attrition is compensated by the fact that individual vines will often bloom until frost.

History tells us that the Japanese have been cultivating morning glories since the 9th Century. The Japanese have become so adept at this art they have developed more varieties than any other nation.
The Chinese were among the first to use the morning glory for medicinal purposes. They used it as a laxative. On the other side of the globe, native tribes living in what is now Mexico used morning glories as a medicine and in their religious rituals. Early on, here in America practitioners of folk medicine used various parts of morning glories to treat everything from stomach aches to rheumatoid arthritis.

An interesting footnote to this plant’s history is that some 3,000 years before Charles Goodyear discovered how to strengthen rubber through a process called vulcanization, the Aztecs made rubber balls that would bounce by treating the rubber with juice from the morning glory plant.

The morning glory flower has great symbolic meaning to those versed in the language of flowers.
The symbolic use of morning glories flourished during the Victorian Era, often depicted in romantic novels and screenplays. In the subtle meanings attributed to different flowers, a blue morning glory blossom represents affection for another, while a red flower denotes strong passion. The morning glory also is said to represent the 11th year of marriage. Morning glories etched on old grave stones are said to symbolize mourning, spirituality and fleeting mortality.

To farmers and home gardeners, morning glories are sometimes considered a pest. One species, Ipomoea aquatic, is classified by the U.S. Department of Agriculture as a noxious weed. Consequently, in the U.S. it is unlawful to import, grow, sell or possess it without a permit.

When growing conditions are just right, some species of morning glories can completely blanket and smother other plants. Such was the case in my neck of the woods this year. I personally have never had a problem with morning glories until this summer. They tried to take over my zinnia gardens and tomatoes. They even climbed up shepherd's hooks holding hummingbird feeders. Morning glory vines went so far as to wrap themselves around road signs in the area.

Fortunately, when this occurs the invading vines (which can grow more than 10 feet a year) can be easily controlled. I simply pull them up before they get unruly. This technique is especially effective if you yank the vines out of the ground and dispose of them before they produce seeds.

If you can keep morning glories at bay, the plants can be used to quickly create an attractive arbor or decorate a fence. The stunning, attractive blossoms and heart-shaped leaves can truly be breath-taking,
If you check a wildlife food plant reference written half century or more ago, you will find that morning glory seeds were then deemed poisonous and not eaten by birds. In a departure from this long-held belief, wildlife biologists today say that the hard, dark seeds of some species are mildly poisonous but are eaten by songbirds, and northern bobwhites from time to time.

In some locales, white-tailed deer are known to severely damage morning glory vines planted for ornamental purposes. However, the morning glory is not considered to be an important deer food plant.
Unquestionably, morning glories are more valuable to nectar feeders such as the ruby-throated hummingbird and insects such as native bees, butterflies and moths. This fact is often overlooked by some wildlife experts.

The morning glory is also a host plant for the morning-glory prominent moth. This grayish, brown moth is often attracted to outside lights on warm summer evenings.

Late-blooming morning glories can be particularly valuable to hummingbirds in late summer and fall when the birds are preparing to migrate or are already en route to their wintering grounds. Often these long-distance migrants have a difficult time finding enough food to successfully make this difficult flight.
As you can see, morning glories can be either a friend or foe. As for me, while I don't plant morning glories, I am not trying to eradicate the native species that grow in my yard either. I can deal with the inconvenience of having to occasionally deal with morning glories trying to wrap themselves around any and everything.

This is a small price to pay for the beauty they add to my backyard landscape and the food they provide to the nectar-feeding wildlife that lives just outside my backdoor.