Out My Backdoor: Jewelweed a Rare Backyard Plant 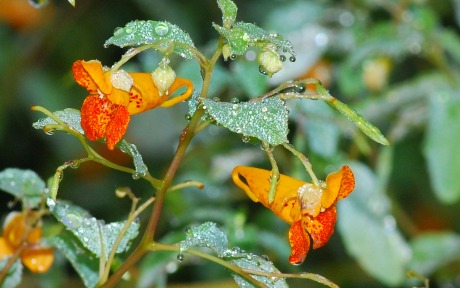 Jewelweed is rarely found growing in Georgia backyards, in spite of the fact that Impatiens capensis is one of our most beautiful native plants, is a great source of nectar eaten by hummingbirds and other nectar feeders, and has long been valued for its purported medicinal properties. More often than not, jewelweed is relegated to putting its roots down in roadside ditches and other wet, disturbed sites.

This plant goes by a number of common names, including ear jewel, kicking colt, ladies earring, silverleaf and a host of others. However, here in the Peach State it is most commonly known as touch-me-not and, just simply, jewelweed.

If you have ever touched a ripe jewelweed pod, it is easy to understand where the name touch-me-not originated. If a ripe pod is touched, it splits open and shoots seeds four to six feet away from the plant.
As for the name jewelweed, several theories have been put forth to explain it. Some say the plant is named for its orange jewel-like flower. Others suggest that the name comes from the fact that dew and rain drops will bead up on its leaves and gleam like jewels in the sun. Still others are convinced that the plant is so named because a layer of tiny hairs found on the plant's leaves trap air and make its leaves appear silvery or “jeweled” when submerged in water.

The jewelweed is an annual that grows anywhere from 2 to 5 feet tall. The height depends on a number of factors, prime of which are sunlight and soil moisture. Though jewelweed grows in sites ranging from full sun to full shade, plants tend to grow taller in full sun. The species prefers rich humus soils and does not do well in dry soil types. Often the best stands of jewelweed hug the moist shorelines of streams, beaver ponds and marshes.

The leaves of jewelweed are large (3½-5 inches long), green and oval, and feature toothed margins. In addition, the surface of the leaves is covered with microscopic hairs.

Oddly, jewelweed has two flowers. One is the conspicuous orange-yellow bloom. The other is an inconspicuous green blossom that does not open and is self-pollinated. The seeds formed by this flower are not propelled away from the plant. Instead, they simply drop to the ground close to the parent plant.
The showy flowers are about 1¼ inches long. The blooms are funnel-shaped, bright orange-yellow and adorned with brown spots. A hooked, conical spur adorns the base of the blossom.

The seeds are eaten by a number of species of wildlife including the white-footed mouse, northern bobwhite and ruffed grouse. White-tailed deer graze on the plant’s foliage. In addition, a few species of moths are reported to use jewelweed as a host plant.

The ruby-throated hummingbird is considered the plant's primary pollinator. However, jewelweed is also pollinated by a number of flies, bees and wasps. Occasionally even butterflies, such as the spicebush swallowtail, can be seen on jewelweed blossoms; however, they are not considered important pollinators of this plant.

Jewelweed blooms from June until the first frost of fall. The timing could not be better for ruby-throated hummingbirds since it coincides with the fall migration of these backyard favorites. As all hummingbird enthusiasts know, from July through September hummingbirds ramp up their food consumption. This is the time when it is not uncommon for Georgians to play host 20 to 100 or more hummingbirds in their backyards. Each tiny bird is trying to store enough energy (in the form of fat) to fuel their fall migration.

Before the advent of hummingbird feeders, rubythroats relied entirely on flowers to provide them with the energy needed to make this difficult trip. Consequently, from time immemorial, jewelweed has been an important source of this food. In fact, some hummingbird experts have found that the peak of the southbound migration of the ruby-throated hummingbird coincides with the height of the blooming period of jewelweed. As such, hummingbirds still routinely stop and feed in patches of jewelweed as they move southward from their breeding grounds.

Why do hummingbirds gravitate to this wild annual? The answer is simple --- jewelweed nectar is high in sugar content. It has been reported that the plant’s nectar can contain upward of 43 percent sugar. This is considerably higher than the sugar concentrations (20-33 percent) in the nectar produced by the flowers of many of the other plants visited by hummers.

Researchers have shown that, when given a choice, hummingbirds prefer flowers containing nectar with high sugar content over those with lesser amounts.

In fact, the ruby-throated hummingbirds propensity for jewelweed has led to some reports that the birds' use of hummingbird feeders drops significantly if a patch of jewelweed is blooming nearby.

With more and more wildlife habitat, including jewelweed patches, being lost each year to development and the invasion of exotic pest plants, we can help offset these losses by providing migrating hummingbirds with easily accessible sources of food such as feeders and planting beds of nectar-rich flowers such as jewelweed.

With that in mind, if you have the right habitat, you should give some consideration to trying to establish a patch of jewelweed in your yard.

I am convinced that one of the reasons why jewelweed isn't more common in our backyards is that it is not a plant that you are likely to find available at most nurseries. However, it can be purchased from native plant nurseries and online.

Beds of jewelweed can be established using seeds or seedlings. If you want to try planting seeds, you can do so in both the fall and spring.

Seeds can be collected in the wild. Simply ride down country roads keeping your eyes peeled for patches of the plant. Look for them growing in wet places adjacent to where streams cross under roadbeds. If you find a stand of jewelweed festooned with ½- to 1-inch pods, stop and see if they are ripe. If you hold a pod tightly in your hand,if ready, it will pop open, expelling its seeds into your hand.

Collect only a few seeds at each spot. Since jewelweed reseeds itself, you can jeopardize a plot if you collect too many seeds.

Freshly-collected seeds can be dropped on a moist seedbed or placed in pots (seedlings can be planted the next spring). These seeds require light to germinate. Consequently, scatter the seeds directly on the surface of the soil and then lightly water them.

Seedlings and plants can also be bought in the spring from reputable native plant dealers. Since both are often available for only a brief time, locate a source of seeds or plants well before spring.

Long before the arrival of the first European settlers, native Americans discovered the medicinal value of jewelweed. This knowledge was passed on to the colonists. As a result, to this day, the juice of the jewelweed has been used to relieve the discomfort caused by run-ins with poison ivy, and stinging nettle as well as the bites and stings of insects. Jewelweed also been used to treat a variety of other ailments including acne and cuts.

If you want to beautify your yard, provide an excellent source of nectar for hummingbirds and other nectar feeders, and establish a natural medicine cabinet just outside your backdoor, you must plant a stand of jewelweed. This is one jewel that you can acquire without breaking your bank account!