Out My Backdoor: Hurricanes Can Affect Backyard Birds 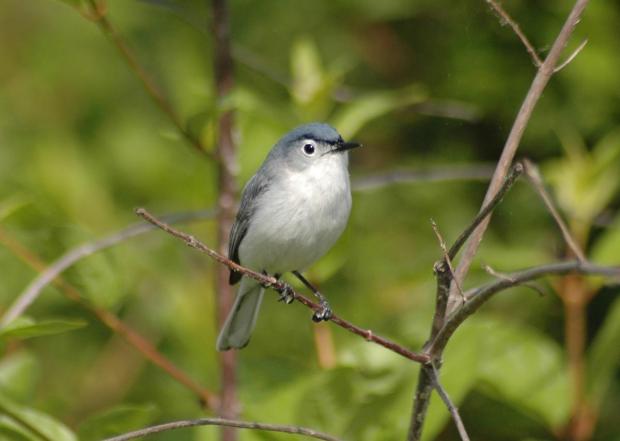 If you live in Georgia, you cannot go through the summer without thinking about hurricanes. This is especially true as the Atlantic hurricane season peaks, September through early October. Although these giant storms rarely make landfall along our coast, their devastating impact on lives and property can be felt far from the storm centers. Likewise, although it is rarely mentioned by the media, those storms that come ashore far from the Peach State can have a deleterious effect on birds and other wildlife, including birds that visit our backyards.

This is especially true for neotropical migrants – birds that nest in North America and winter in the Caribbean, Central and South America. Neotropical migrants include the warblers, tanagers, catbirds, grosbeaks, thrushes, hummingbirds and others that spend part of the year just outside our backdoors.

Once they leave the North American coast and are migrating across the Gulf of Mexico or south Atlantic, if they encounter a hurricane or tropical storm, they are flying directly into harm's way. Sometimes these winds are so strong birds are literally blown backward. In other cases, if they continually try to fly into the wind, they quickly use up the fuel stored as fat to make the perilous journey and, exhausted, fall to their death into the sea. It is not uncommon to find the bodies of hundreds of songbirds washed up on the shore after a hurricane has passed.

Take the ruby-throated hummingbird, for example. Many migrate across the Gulf of Mexico twice yearly. The shortest distance across open water is 500 miles. Before they leave North America, they try to store up 3/40ths of an ounce of fat to fuel the journey. If they encounter a headwind of 20 mph, the wind will push them backward. Even if the birds are able to fly forward, they will burn up an excess amount of fuel. This increases the chance they will not have enough energy to reach land.

If they are lucky and have enough stored fat, some may be blown off course and make landfall far from their intended destination.

Exhausted birds sometimes land on passing ships, oil rigs or small islands. This happened in 1979 when flocks of chimney swifts that normally migrate through Central America enroute to their winter home in the Amazon Basin were blown off course and ended up on a small Caribbean island. Since there were not enough flying insects on the island to support the swifts, they eventually starved to death.

Perhaps the first written record of the impact of strong winds on migrating birds is chronicled in the Bible. In verses 31-32 of Numbers chapter 11, you will find the story of how the Israelites were tired of eating manna and wanted to eat meat. The Bible goes on to say that the Lord supplied the children of Israel with flesh in the form of quail. The quail were brought in by a wind blowing in from the sea. Thousands of birds literally fell from the sky and were gathered by the Israelites. Many biblical scholars believe that these birds were probably migrating coturnix quail that were blown off course.

If the majority of the species’ total population was aloft when a hurricane swept across the warm waters of the south Atlantic, most could die, possibly leading to extinction of the species. Fortunately, many species typically migrate over an extended period of time. Ruby-throated hummingbirds, for example, migrate from July into October. Consequently, if some hummingbirds perish in an August hurricane, the species will survive since other rubythroats would successfully cross the Gulf earlier, while others would make the flight later in the summer.

In 2005, Hurricane Wilma formed in the Caribbean and roared up the eastern coast of North American. Literally thousands of migrating birds were carried by the storm's strong winds northward into northeastern Canada and western Europe. One species impacted by the storm was the chimney swift. The following summer, roost counts conducted in Quebec revealed that chimney swift populations there had plummeted by roughly 50 percent.

While it is easy for us to visualize and understand birds being lost at sea or blown off course, it is much harder to fathom how habitat loss brought about by hurricanes can also cause the demise of migrating birds.

Hurricanes can destroy forests used by birds for nesting and feeding. This was never more evident than when Hurricane Hugo annihilated a wide swath of forest in South Carolina's Francis Marion National Forest, leaving forest-nesting species in that area with nowhere to live and breed.

Also, when hurricanes wipe out coastal forests in their path, birds lose valuable habitat to refuel before migrating to and from the tropics. Without the seeds, berries, insects and other foods normally found in these woodlands, migrants’ chances of survival are greatly reduced.

Likewise, should a hurricane destroy forests along the western Gulf of Mexico or Central America, birds will find little to eat once they make landfall after their long trip from North America. This can increase mortality shortly after their flight or make it more difficult for them to store enough food for the journey north at the end of the winter. Those that do make it back often arrive in poor condition and sometimes produce fewer young that year.

As is always the case, when habitat is drastically altered some animals suffer and others prosper. When mature forests disappear, species that thrive in more open habitats and young forest benefit.

We must remember that for untold thousands of years, wild bird populations have successfully survived the annual threat of hurricanes. Fortunately, bird populations are often quite resilient and rebound quickly after a natural disaster.

However, the world is rapidly changing. Many neotropical migratory bird populations are in decline. If that isn't enough, as our climate continues to warm, weather experts tell us the number and intensity of severe storms will increase. Faced with such dire predictions we must ask ourselves, "Will such a potentially deadly combination push some of our bird neighbors to or over brink of extinction? Time will tell.

In the meantime, whenever I hear that a new hurricane poses no threat to Georgia, I cannot help but wonder how it will impact many of my backyard neighbors. I can't imagine what it would it be like without ruby-throated hummingbirds entertaining me with their beauty and aerial acrobatics throughout the spring and summer, or the wood thrush sharing its flutelike song on spring mornings, or even the secretive gray catbird's catlike call coming from the shrubbery.

My life would not be the same without them, and would be much poorer for it.