Out My Backdoor: This Honeysuckle Is a Good Guy

To many, the mere mention of the word honeysuckle conjures up the image of Japanese honeysuckle.
As its name suggests, Japanese honeysuckle is an alien plant. It was introduced into America as an ornamental in 1906. From its new home on Long Island, N.Y., during the 20th century this aggressive vine quickly wound its way across untold thousands of acres across the country.

As any Georgian can attest, this despised plant seems to be everywhere. We find it growing in forests, along roadsides, in our shrubbery and gardens, you name it. It is indeed one of the bad guys of the plant world. 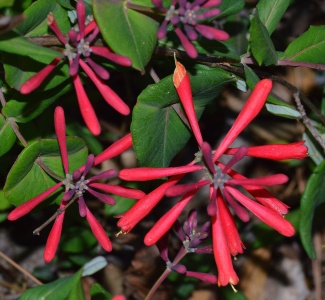 But before the arrival of this foreign nemesis, the word honeysuckle had a more positive connotation. Back then folks in the Peach State grew up with our native coral honeysuckle. It was, and still is, known as the trumpet honeysuckle and woodbine.

Honeysuckle was known then as a thing of beauty. It was revered for its medicinal uses. The leaves were chewed and the resulting green mush spread on bee stings. Some folks even dried and smoked the leaves to treat asthma. Others used it to cure nagging coughs and the discomfort of a sore throat. One community in southeast Georgia thought so much of the perennial vine they named their town after it: Woodbine.

Coral honeysuckle is nothing like its reviled relative. I guess you could say that it is a gentle plant. It is not invasive, regales us with bouquets of gorgeous scarlet red flowers for months on end, and is cloaked in attractive foliage throughout the year. If that isn't enough to endear it to us, the vine requires little or no care, it is drought tolerant and it provides food and shelter for wildlife

Coral honeysuckle is a native, semi-woody vine that grows from 3 to 20 feet long. From late winter until frost, it bears an abundance of 2-inch red, tubular-shaped flowers in 4-inch clusters. However, the majority of the blooms are produced in spring and early summer. In my neck of the woods, it retains its shiny, purplish-green foliage throughout the year.

Although this native honeysuckle grows best and displays the most flowers when located on a site in full sun in slightly acidic, moist soils, it will grow in a wide range of conditions. For example, I often find it growing in dry, red clay soils, as well as in both partial and complete shade.

When the plant doesn't have anything to support, it will trail along the ground or even form a small mound. However, when it is encouraged to climb something like a trellis or fence, its beauty takes on a new dimension.

One of the most spectacular plantings I have ever come across was in central Florida. There, coral honeysuckle completely shrouded a chain-link fence in front of a home. It created a living wall of green foliage accented with splotches of stunning red flowers. As I stood admiring the planting, scores of hummingbirds drank nectar from the long, tubular red blossoms tipped with orange.

One of the things I like best about coral honeysuckle is that it is a valuable wildlife plant. It is the host plant to two of my favorite insects. Both the spring azure butterfly and snowberry clearwing moth lay their eggs on the leaves of the plant.

The spring azure is a dainty, powdery blue butterfly that can be seen flitting about our yards at this time of the year. In spite of its beauty, this common butterfly often goes unnoticed. There are a couple of reasons for this. First, it is small, possessing a wingspan of only ¾- 1 1/4 inches. It also has to compete for our attention with some of Mother Nature's most beautiful floral creations, such as azaleas and dogwoods.

I am sure that you have seen the snowberry clearwing: It is a day-flying moth that visits our flowers throughout the summer. Since looks and acts like a tiny, brown hummingbird, most folks call it the hummingbird moth.

Coral honeysuckle flowers are visited by a variety of nectar-feeders such as butterflies, moths and bees. It is a favorite nectar source of ruby-throated hummingbirds. Since it begins blooming in early spring, a time when nectar is scarce, it provides these backyard favorites with food when nectar is often scarce.

In late summer and fall, the vines are festooned with bright red or black berries. When ripe, a number of birds compete for them, including quail, both gold and purple finches, sparrows, hermit thrushes and American robins.

It is easy to add coral honeysuckle to you landscape. Plants can be propagated from cuttings, layering and seeds. In addition, seedlings are readily available online, in catalogs and at nurseries that deal in native plants. Although they may require a little tender loving care getting started, once established, the attractive vines are practically maintenance free.

I guarantee, once you become familiar with coral honeysuckle, the name honeysuckle will take on a whole new meaning.