Out My Backdoor: Here’s the Hole Story

By their very nature, holes are dark, mysterious places. Whenever we find one, we can’t help but wonder what creature is lurking just beyond its shadowy entrance. Many folks strongly believe that holes should be avoided at all costs and give them a wide berth. They are convinced that these deep, dark tunnels harbor creatures that might harm them.

On the other hand, the more whimsical among us would like to believe that they are passageways to magical worlds inhabited by mythical creatures like Hobbits. I am sure this belief was fueled, in part, by Lewis Carroll’s classic book “Alice in Wonderland.” While the holes in our backyards aren’t inhabited by the likes of Tweedledum and Tweedledee or the Mad Hatter, they are home to an amazing array of wildlife. 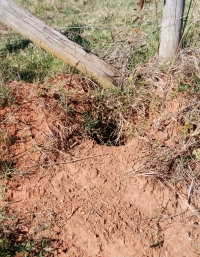 Trying to figure out just what critters live in these holes doesn’t require the investigative skills of Sherlock Homes; it can, however, be a real test of your outdoor skills. It is impossible to be absolutely sure what inhabits every hole you find. Let’s take a look at some of the clues that give you an excellent chance of ascertaining what, if any, creatures are living in the holes scattered across your backyard.

The first thing to consider is location. As we all know, different animals often prefer living in quite different habitats. For example, you would not expect to find a beaver or muskrat living very far from water. By the same token it would be unusual to find foxes denning in the bank of a stream.

Your short list of suspects should include those animals that will live close to humans. Therefore, don’t expect to find a bobcat raising its young in your yard. While bobcats will indeed hunt close to our homes, they typically raise their youngsters well away from our houses. What complicates things is that some animals are found in a variety of places. Chipmunks, for example, can just as easily live in remote woodlands as near your back door. For that reason, you need to look for other clues.

One of the best clues is the size of the hole. As a rule of thumb, the diameter of a hole’s entrance prevents some animals from entering it. A hole just large enough for a shrew would be too small for a cottontail. One the other side of the coin, a hole wide enough for a gopher tortoise is often inhabited by much smaller creatures such as snakes, insects, frogs and others.

Insects and spiders excavate some of the smallest holes that you will find in your yard. A hole that measures a half-inch or less in diameter is made by one of these creatures. One spider that lives in burrows is the wolf spider. They can sometimes be coaxed out by gently probing the hole with a blade of grass.

A number of insects use burrows. All of us know that yellow jackets live in burrows. However, you may be surprised to learn that some of the other bees that utilize burrows are bumblebees and solitary bees. These insects are extremely important pollinators. Some bees will nest in colonies. If you have a steep bank with nothing growing on it nearby you will sometimes see dozens to hundreds of tiny cavities dug in the side of the bank. Here, the bees deposit their eggs.

One of the smallest holes is excavated by shrews. Shrews are the smallest mammals found in Georgia. They lie in holes with entrances measuring 1 inch in diameter. Shrews like to tunnel in very soft soil or leaf litter close to the surface of the ground.

Our backyards are home to a variety of rodents such as mice, voles and moles. They usually occupy dens with entrance holes measuring 1½ inches across. If you find an earthen plug at the entrance of a hole in this size range, chances are good the excavation is being used by a mole. On the other hand, voles are particularly fond of creating intricate runways in grassy fields. Unlike moles and voles, mice rarely dig their own holes. Consequently, they can be found in both mole and vole tunnels.

If you live near water you might have crayfish making burrows in your yard. They dig a hole about 2 inches in diameter surrounded by a mud chimney that rises an inch or more above the ground.

Throughout much of the state, the holes most commonly found by homeowners are made by the eastern chipmunk. These holes measure about 2 inches in diameter. You won’t find any evidence of digging around the entrances. However, as chipmunks’ tunnels begin caving in, the underground pathways leave depressions in lawns and gardens.

Even when chipmunks are plentiful in a neighborhood, people often have a difficult time identifying the animals digging these holes. This is because chipmunks will often avoid entering one of their holes when they know somebody is watching.

Remarkably, a number of larger animals will also dig holes near homes. One of these animals is the striped skunk. They dig dens in late summer or early fall. The entrances are 5 to 6 inches wide. Skunks like to dig their holes in dry, well-drained sites. You will often find dropping, leaves and grass near the entrances. Skunks will haul leaves and grasses into their holes for use as bedding. Interestingly, during extremely cold weather they will also seal the burrow openings with leaves.

Raccoons are found in practically all neighborhoods. While we don’t often think of raccoons using burrows, they will retreat to burrows (especially those of the woodchuck) during harsh winter weather. Keep an eye out for their tracks around the openings to large holes.

In you live in an area in south Georgia that has deep, sandy soils, you might have a gopher tortoise burrows on your property. These elliptical-shaped holes can be a foot or more wide. In front of the burrow you will see an apron of sand.

If you reside at the other end of the state, in North Georgia, you may have woodchucks digging holes in your backyard. These holes measure 5 to 6 inches in diameter and will also have a mound of dirt in front of the entrances. Strangely, in spring, an odor that smells much like chicken stock can often be detected coming from a woodchuck burrow.

Nine-banded armadillos are showing up more and more in backyards across the state. Their burrows are roughly 8 inches wide. They are often found near roots of large trees or in the sides of slopes.

The eastern cottontail, opossum and snakes are squatters and don’t dig their own dens.

Although holes are critical to the survival of many animals, they are one of the most overlooked and unappreciated features in backyard habitats. Far too often when homeowners discover a hole, they fill them with dirt, fearing they might contain venomous snakes. This often dooms any animals living there.

If a hole is not in a place where it poses an injury threat, leave it alone. Then visit it from time to time and use your outdoor skills to figure out if it is occupied. After considering all of the clues you find, see if you can figure which of your wildlife neighbors lives there. Like most endeavors, the more you practice, the more accomplished you become. Once you become proficient in this art, you will find that this knowledge will enrich your time outdoors.

Begin your journey of discovery today. Who knows what you will find.