Out My Backdoor: Halloween Superstitions and Backyard Wildlife

Nowadays most folks enjoy having a cornucopia of wildlife living just outside their backdoor. However such has not always been the case. In times past, people often either took their wildlife neighbors for granted or honestly believed that many of them were imbued with frightening magical powers, or worse yet, cavorting with witches and ghosts.

Many of these superstitions and myths have been handed down for generations and linger on to this day. This is especially true of a handful of animals that are doomed to be forever linked to Halloween.

Here is a small collection of some of the bizarre myths and superstitions that concern some of our most familiar backyard residents. …

Both American and fish crows are frequent backyard visitors. Unfortunately for them, they have long been associated with Halloween, misfortune and even the devil and death. Perhaps it is because they are cloaked in black. Who knows? At any rate, in years gone past, the mere call or appearance of a crow on or close to Halloween would send chills down people's spines.

In Ireland, some folks were once convinced that crows were actually mischievous fairies. As such, they didn't want to cross paths with a bird that might bring unwanted complications into their lives. 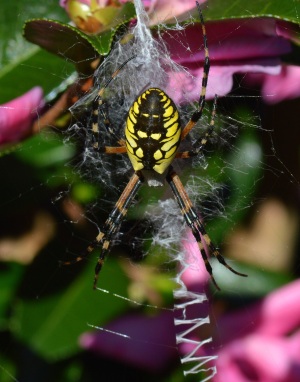 At other times in our history, folks believed that bad luck would befall anyone who heard a crow call under the cloak of darkness. Since crows typically don't fly at night unless disturbed from their roosts, it is difficult to understand how this superstition ever got started.

It was far more likely that a crow might land atop a house. If this occurred many people were once certain this was a sure sign they and their family had better brace themselves for bad luck.

The four species of owls that we are most likely to see or hear in our backyards are the great horned, barred, eastern screech and barn owl.

Owls have also long been viewed as harbingers of bad luck and even death. One myth tells us that bad luck will befall anyone who hears an owl hoot three times. Another wild myth claims that owls are the only creatures that can live with ghosts. Keep this in mind if you are looking for a genuine haunted house this Halloween. If your search brings you to a ramshackle vacant house where an owl is nesting, some believe that you can be sure it is haunted.

Sadly, even to this day, many people find the calling of an owl unnerving. However, when trick-or-treaters hear an owl call as they go house to house looking for treats, the eerie sounds can make their nighttime adventure a little more exciting. However, in the distant past, when people believed that the calls of owls were made by the souls of people long departed, these cries elicited genuine fear.

Believe it or not, some people once actually harbored the notion that an owl calling near a home of a newborn baby could cause the child to die or even grow up to be a witch. At one time some people were also sure that an owl landing on the roof of a house was a sure sign that someone living in the house would soon die.

As we all know, untold myths and superstitions have been linked bats to Halloween. For hundreds of years, folklore has held that witches can turn themselves into bats or that these flying mammals are lost souls wandering about once the sun goes down.

One myth claims that, if a bat flies around a house three times on Halloween, death will soon follow.

To this day, a myth that parents often repeat to their children when they send them out into the night to trick or treat is they should be careful if they see a bat. This is because they honestly believe bats will fly down and get tangled in the youngster’s hair.

Another unbelievable tale says that if a ghost inhabits a house, it will allow bats to fly inside.

The spider is another animal linked to Halloween. One of the strangest spider-related myths I have stumbled across claims that spiders live in the folds of a witch's cloak and actually whisper advice to these demonic denizens of the night.

Believe it or not, not all Halloween legends dwell on misfortune, death or misfortune. For example, one folk tale says that spotting a bat flying about well before the sun sets is a sure sign good weather is on the way.

Surprisingly there is even a Halloween superstition involving snails. Supposedly, if you catch a snail on Halloween and place it in a covered dish, the next day when you remove the cover, you will see that the snail has written the first letter of your sweetheart with a trail of slime.

Like it or not, slime and all, backyard wildlife-related Halloween myths and superstitions seem destined to be an intriguing part of the fabric of what is undoubtedly our strangest holiday.