Now that November is here, more than likely you haven’t seen a ruby-throated hummingbird in your backyard for quite some time. My wife and I were fortunate to see one as late as Halloween eve. However, because we haven’t spotted one since, I guess it is safe to say that it, too, has departed on its epic flight to its wintering grounds across the Gulf of Mexico.

I must admit that were sad to see it leave. However, now that November is here we are excited that Georgia’s second hummingbird season has arrived.

When Georgia’s Nongame-Endangered Wildlife Program (now known as the Nongame Conservation Section) began researching hummingbirds in 1988, only two species of hummers were known to occur in the state. These were the ruby-throated and rufous. One of the major reasons for this was that most people took their hummingbird feeders down in September or October. This was done under the mistaken yet popular belief that if they left their feeders up longer, hummingbirds would not migrate and subsequently die with the onset of cold weather.

We now know that nothing could be further from the truth. You simply can’t stop hummingbirds from migrating with food. If you stop and think about it, when the hummingbird numbers began to wane a few weeks ago, your feeders were brimming with sugar water and the flowers in your gardens were full of nectar and tiny insects. Yet in spite of this smorgasbord of sugary delights, the birds left.

Hummingbirds migrate in response to declining day length, not food abundance. As the days grow shorter, chemical changes take place in the tiny birds’ bodies. This triggers the birds to go on a feeding binge. Their goal is to store as much food fuel as possible to make their fall migration. This fuel is stored as fat. Each bird needs at least 3/40th of an ounce of fat just to fuel their migration across the Gulf of Mexico.

Concern for the birds’ well being during frigid weather was also unfounded. Hummingbirds can weather temperatures that dip into the teens and below. They accomplish this, in part, because they can go into torpor. When in torpor, a hummingbird’s heart and breathing rates and body temperature all drop dramatically. These dramatic changes reduce the amount of energy the birds need to survive frigid temperatures.

Wintering hummingbirds eat a variety of foods. In addition to the sugar water we put out for them, they consumer nectar found in winter-blooming flowers such as leatherleaf mahonia. On warm winter days, hummingbirds will also dine on small insects that periodically hatch throughout the winter months. 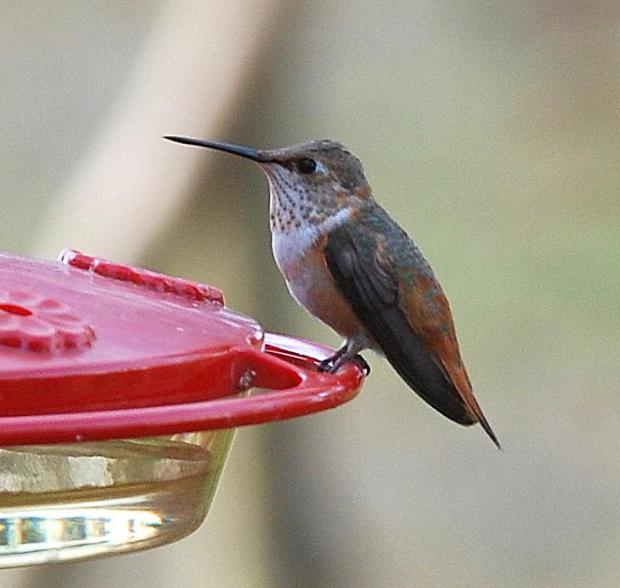 Another important source of food is provided by the yellow-bellied sapsucker. This unusual woodpecker is a winter resident throughout the state. It excavates tiny holes in living trees such as fruit trees, oaks, pecans and others. When sap wells up in these holes, the sapsucker licks up the sweet fluid with the aid of a brush-like structure on the tip of its bill. Other animals such as butterflies, squirrels, Carolina chickadees and hummingbirds long ago discovered this source of food.

Once Nongame and other organizations got the word out that folks should keep at least one feeder out throughout the fall and winter months, the list of hummingbirds seen in Georgia began to lengthen.

While the ruby-throated is the only species of hummingbird known to nest in Georgia, it is rarely seen in most parts of Georgia during winter. Most of the birds that are spotted here in winter are seen along the coast and in the Thomasville area.

The list of other hummingbirds seen here from time to time during the winter includes the black-chinned, calliope, Anna’s, Allen’s, broad-tailed, broad-billed, magnificent, buff-bellied and green-breasted mango. Most of these birds breed in the American West.

The best way for you to spot a wintering hummingbird is to leave at least one feeder up throughout the winter. Fill it about half full of nectar then sit back and wait.

Wintering hummingbirds can show up anytime throughout the second hummingbird season. When a bird does appear, there is no way to predict how long it will stay. Some are only seen a time or two, while others stay for a few days or weeks. In some instances, they stay until spring.
In addition, some birds return to the same backyard or neighbor year after year.

Trying to attract a wintering hummingbird is much like playing the lottery. Chances are you won’t have a hummingbird show up outside your backdoor. However, if one does, you are indeed very lucky and in for a real treat.

Terry Johnson is a former Nongame program manager with the Wildlife Resources Division, a backyard wildlife expert, and executive director of TERN, the friends group of the Nongame Conservation Section. His column is a regular Georgia Wild feature.