Like most of you, my backyard wildlife watching typically ends when the last cardinal leaves the sunflower feeder and heads to its nighttime roost. Such has not been the case lately, however. For the past few weeks after the sun has dipped below the horizon, my wife and I have enjoyed sitting on the deck watching slow-moving, blinking, soft lights drift across our backyard.

Seeing these eerie lights never fails to bring back fond memories of the golden years of our childhoods.

These seemingly mystical lights are generated by a small beetle that biologists call fireflies. When I was growing up we called them lightning bugs. Other people around the globe know them as glow flies, golden sparklers, moon bugs, blinkies and even fire devils. 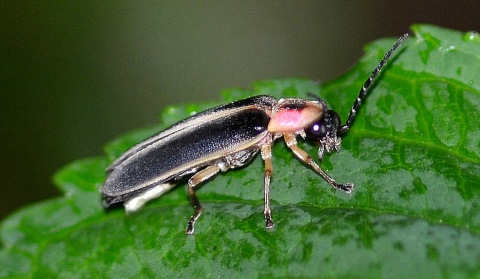 Entomologists tell us that the world is populated by some 2,000 species of these amazing insects. Some 180 species cast their eerie, cool light over North America. Georgia is home to upwards of 40 or more species.

Mankind has long been fascinated by these remarkable insects. Native Americans would crush lightning bugs and adorn their faces and chests with the glowing insects. People living in the jungles of Africa have sometimes tied cheesecloth bags of fireflies to their ankles as they walk about at night.

After remaining a mystery for thousands of years, scientists were finally able to unlock the secret of how these insects are able to produce what many consider to be perfect light. It is deemed perfect because it produces very little heat (4 percent) while generating its “cool” light. Both incandescent and fluorescent light bulbs are far more inefficient. The standard incandescent light bulb, which is in the process of being phased out, converts only 10 percent of the energy it receives into light. Some of the new fluorescent bulbs convert 90 percent of their energy to light.

Fireflies seem to magically create light using special light-producing cells in the abdomens. Two chemicals – luciferin (named for the fallen angel Lucifer) and luciferase – are found here. Light is generated when luciferin is combined with the catalyst luciferase in the presence of a chemical found in all of us, ATP.

The primary reason fireflies flash is to attract mates. Most of the lightning bugs we see in our backyard are typically males. In fact it is common for males to outnumber females 50 to 1. Females usually return the males' flashes while perched on grass and other low-growing vegetation.

Each species of firefly has its own distinct flash. If you carefully watch the fireflies flying about your yard, you will quickly notice that they often flash for different lengths of time, vary the length of time between flashes, fly certain distances between flashes and even display different colored lights.

When a female spots the correct pattern of flashing, she will flash back to her suitor. The male then flies to her in hopes of mating.

Males are sometimes the unwitting victims of a deadly hoax. The females of some species of predatory lightning bugs imitate the flashing of other species. When an unsuspecting male of another species flies to the perpetrator of the ruse, it is eaten.

Fireflies will also flash in an effort to avoid being gobbled up by birds, snakes and other predators. It seems that the chemicals that enable the insect to create light are distasteful. Once a bird mistakenly eats a firefly, it rarely goes back for seconds.

Additionally, fireflies blink to defend their territory from other males, much in the same way birds sing to delineate their breeding territories.

When I was a boy, we enjoyed catching slow-flying fireflies in a glass mayonnaise jar. Now that I look back at this popular summertime activity, I realize that if I had tripped and fallen in the dark carrying a glass jar, I could have severely cut myself. With that in mind, I recommend that if you want your children or grandchildren to catch a lightning bug or two, give them in a clear, plastic jar or better yet a small insect net.

And if you want to keep your catch for a short period of time, place the firefly in a plastic jar with a lid with breathing holes poked in it. Also, place a damp paper towel in the bottom of the jar to ensure the insect will not dry out.

After you and your family have closely examined the insect, release it. When this is done, you won't be reducing the firefly population in your neck of the woods. Like far too many of our wildlife neighbors, firefly numbers have been dropping for years throughout much of the world.

Biologists are uncertain as to why fireflies are disappearing. However, it appears that habitat loss and light pollution are probably the main culprits.

For example, in Georgia thousands of acres of land are annually being converted to housing developments, roads, shopping centers and other commercial buildings, agricultural lands and other uses. Some of these lands are prime firefly habitat. Most fireflies seem to prefer forest, field, lake and stream borders. In addition, biologists also suspect that pollution and the indiscriminate use of pesticides are also taking a toll.

Light pollution is something that is often overlooked as a factor likely contributing to the demise of fireflies. Since fireflies use light to communicate with each another, the bright lights coming from street lights, signs and both inside and outside our homes and other buildings could easily be making it difficult for fireflies to "talk to one another."

As a result, in spite of the fact that many of us are living in areas where fireflies were once abundant, many homeowners rarely, if ever, enjoy watching them fly about their yards.

Here are a few tips that may help you increase the numbers of fireflies around your home.

Habitat
Fireflies prefer yards with scattered trees and shrubs. If your yard lacks these plants, add them. Also let the grass grow in a few places such as along the border of your property. It also helps to refrain from mowing your grass too short. Fireflies often spend the daylight hours in grass.

Ground litter
Leave dead leaves and other vegetative litter beneath trees and shrubs as well as flower gardens. Firefly larvae often live in rotten logs and the litter on the ground. I let the litter and grass grow up beneath a large weeping cherry in my yard. In the late afternoon, when I water hydrangeas growing beneath the canopy of the tree, the spray coming from the hose invariably flushes fireflies.

Light
You might want to consider reducing the amount of light falling on your backyard by pulling down the shades in the evening. Choosing outside lights that are activated by motion detectors will also help.

Water
If you don't live near a pond or stream, you might consider building a small backyard pond. Fireflies seem to do well in the tall vegetation growing near open water.

Pesticides
While it is always best to avoid using pesticides and herbicides around the house, if you must apply them, do so sparingly. Such chemicals can kill adult fireflies and their larvae.

The firefly is indeed a unique treasure. However, it one of those backyard inhabitants that is too often overlooked until it is gone. While the firefly may not be an important member of your backyard wildlife community, it certainly means a lot to those of us who enjoy watching them transform our yards into a sparkling wonderland on a sultry summer evening.

Mark Twain once wrote that he felt like he was 7 years old again when he saw fireflies. I must admit I do, too!

Terry W. Johnson is a former Nongame program manager with the Wildlife Resources Division, a backyard wildlife expert, and executive director of TERN, the friends group of the Nongame Conservation Section. (Permission is required to reprint this column. Contact rick.lavender@dnr.ga.gov)

Learn more about TERN, The Environmental Resources Network, at http://tern.homestead.com
“Out My Backdoor” columns archive.