Out My Backdoor: The Christmas Card Bird 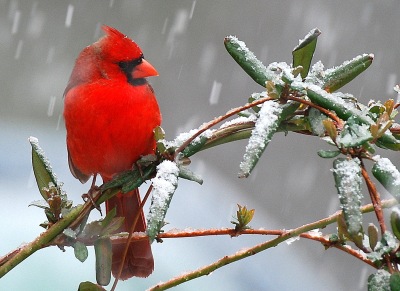 The tradition of sending Christmas cards is said to have begun in England in 1843. Since Christmas cards began being printed in the United States during the 1870s, cards have been graced with a veritable flock of birds. However, beyond a shadow of a doubt the bird that has graced more Christmas cards than any other is the northern cardinal.

Who among us hasn't received cards that feature a male cardinal bedecked in its brilliant red plumage sitting in a Christmas tree or perched on a snow-covered mailbox packed with presents? At first glance, this may seem odd as the bird is not found in Europe or the Holy Land or outside the eastern two-thirds of the United States.

More than likely, the cardinal owes its link to this special holiday to its color. The male cardinal's plumage is crimson red, the same color as the robes worn by many members of the Catholic Church's College of Cardinals. Red and green are the two colors most often featured in Christmas decorations and card designs. As we all know, it is also the color of Santa's suit. Green is the color of holly as well as traditional Christmas trees, mistletoe and wreaths.

Sadly most of the world sees cardinals only on Christmas when they fly into their homes on Christmas cards. However, that number is dropping for many people living in the United States. This is due to the fact that, for more than a century, cardinals have been expanding their range northward.

Today, folks in Ottawa, Canada, Bangor, Maine and Niagara Falls, N.Y., are enjoying the treat of seeing cardinals where not too many decades ago they had little chance of spotting the Christmas card bird in their backyards. The growing popularity of bird feeding is thought that have played key role in enabling the cardinal to endure harsh northern winters.

Cardinals are now found from the Great Plains eastward across the United States and southern Canada.

Since the cardinal is a permanent resident in all of Georgia's 159 counties, we can experience the joy of seeing a cardinal not just at Christmas but throughout the year. Indeed, the cardinal is one of our favorite birds. The fact that the cardinal is the official state bird of seven states is a tribute to its widespread popularity.

For many, just seeing a cardinal rekindles the Christmas spirit. Remarkably, if you want to heighten your enjoyment and appreciation of this special bird, all you have to is to learn to recognize a few of the bird's fascinating mating rituals. This adds a whole new dimension to backyard birding.

With Christmas just days away, there is no better time to start than right now. Well before Santa makes his whirlwind trip around the world on Christmas Eve, small flocks of male and female cardinals descend on our bird feeders. Since the birds don't flock together at any other time of the year, you are apt to see more cardinals in your yard now than at any other time of the year. These flocks will disband before the breeding season begins in the spring.

During winter, the birds generally feed together amicably. However, it is not uncommon for male cardinals to bully away females that try to feed too close to them. As Old Man Winter begins losing his icy grip on the countryside, you will notice that the males' behavior toward females begins to change.

One day when you look out your frosty window, you will notice that male and female cardinals are peacefully feeding side by side. Later on you will be surprised to see male cardinals actually picking up seeds and offering them to females feeding nearby. This gesture is most often seen in spring, however, it will continue into early summer.

As any Georgian can attest, the cardinal has a beautiful song. Unlike many birds, both males and females are excellent songsters. Once the winter flocks have disbanded and the birds have separated into their respective breeding territories – which can range anywhere from 3 to 10 acres – they begin singing in earnest.

Although you have probably enjoyed listening to the comforting song of the cardinal throughout your life, you probably didn't realize that mated pairs will engage in what is called countersinging. Each bird will perch at a different spot within their nesting territory. One bird will sing a phrase several times. Its mate will answer the song, note for note. Eventually the first bird will alter its song, and that is also repeated by its mate.

This back and forth duet sometimes goes on for hours. When countersinging is taking place, try to locate the singing birds. Since the ritual is also being practiced by cardinals occupying adjacent territories, unless you see the singing birds you can't be sure if you are listening to a mated pair or two males or females. Biologists believe that this practice probably helps cement the bond between the two birds and even aids in defining territories.

If you are in luck, you might even see a pair of cardinals engaged is what is called the lopsided pose. You are less likely to see this than food sharing. I have never witnessed it. Birds displaying this behavior will first lean their bodies one way and then the other, in a swaying motion.

There are few simple things you can do to transform your yard into a haven for cardinals so you will be able to enjoy watching them throughout the year. Since cardinals prefer brushy, open areas, if you have a wide-open yard, one of the first things you can do is plant a variety of thick shrubs around your yard. If possible, also maintain brushy areas along the edge of your property. They will provide the birds with places to escape predators and harsh weather. These areas also offer cardinals ideal nesting sites.

Follow this up by planting a variety of seed and berry-producing trees and shrubs, such as American beautyberry, hackberry, mulberry and dogwood. These can be supplemented with feeders stocked with clean seeds. By far the cardinal’s favorite seed is sunflower. The best sunflower seeds are small black oil sunflower seeds.

If you don't want to have to periodically remove sunflower seed hulls, you can offer the birds hulled sunflower seeds. While more expensive, these are sure to cut down on the mess beneath your feeders.

The birds will also eat white millet. Another seed you might try is safflower. In some parts of the country, safflower is called cardinal candy because cardinals seem to relish it. I have tried it and have not seen cardinals flock to it. However, if gray squirrels, European starlings and house sparrows don't top your list of favored feeder users, you might want to try safflower seed because these critters don't like it.

Traditionally, wildlife enthusiasts only fed birds in the winter. Nowadays, feeding has become a year-round hobby. Regardless of whether you feed birds throughout the year or only in winter, keep your feeding area clean. This will prevent the spread of harmful fungal and bacterial diseases.

Another important addition to your yard should be a birdbath. Cardinals use birdbaths for drinking and bathing. Watching a cardinal bathe is a real experience; the bird’s animated bathing sends water flying everywhere!

Last but not least, since cardinals eat lots of insects, don't use pesticides on your plants unless it is absolutely necessary. If you have to use pesticides, keep spraying to a minimum.

Once you begin seeing lots of cardinals throughout the year and learn to recognize some of the key facets of their mating rituals, don't be surprised if you begin experiencing the magic of Christmas from January through December. Wouldn't it be nice if your neighbors did the same?